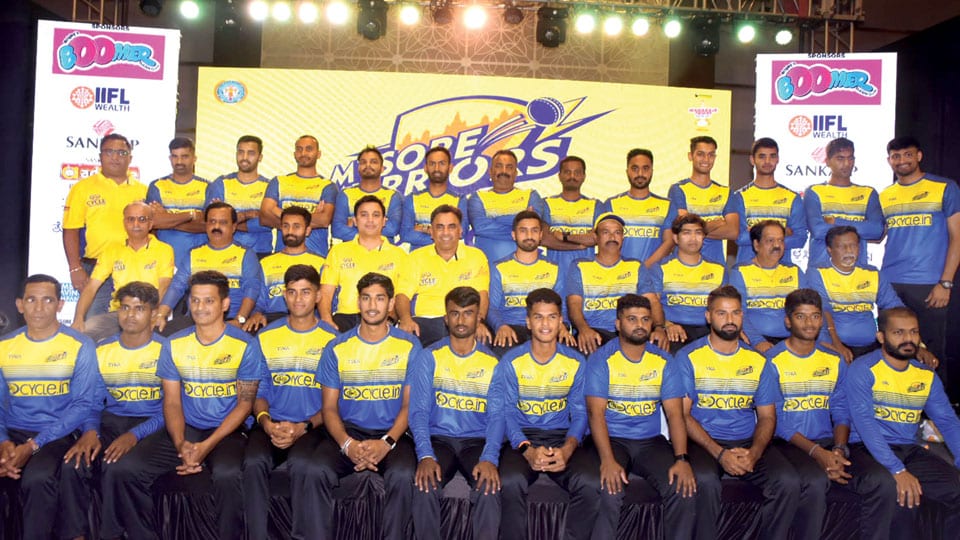 On the eve of the inaugurals, Star of Mysore (SOM) caught up with the tournament sponsor, coach and captain. Now read on…

We have a well-rounded team

The N.R. Group, the makers of Cycle Pure Agarbathi, have been supporting  cricket since 2004. The company has been one of the leading sponsors for international cricket tournaments. It now sponsors the Mysore Warriors Team. Managing Director Arjun Ranga tells Star of Mysore that he has immense hopes for the team this year considering its good composition and overall balance. Excerpts:

SOM: This year, the Karnataka State Cricket Association (KSCA) has changed the name of the Cup to Maharaja Trophy T20 Tournament. Any thoughts on this?

Arjun Ranga: I think you should ask the KSCA that question. But what I understand is that the tournament has a three-year tenure and they keep renewing the tournament every three years. It has already been nine years and I feel that the KSCA intends to honour Srikantadatta Narasimharaja Wadiyar, who died on Dec. 10, 2013, just a week after reclaiming the post of KSCA President. Also, he has done so much for cricket and his   contributions are invaluable.

SOM: How is the morale of Mysore Warriors this time?

Arjun Ranga: Team morale is good in the sense that the time available for typical team-building activities and practice was limited as the team was only picked up on July 31 and the matches start from Aug. 7. Usually, we have about 20 days with the team and this time, we have had a short time and of that, three days were washed out by rains and there were no practice sessions. But what I understand from the coach and the captain is that all the boys have been playing in the T20 tournament and all are cricket-ready.

Team building activities are going on now with the coach and the captain; and our captain Karun Nair is experienced. He is bringing a lot of value and understanding to the youngsters. All the senior cricketers we have are very professional and we have a heady balance.

SOM: I suppose the players will better gel with each other once the matches start.

Arjun Ranga: Yes. Because it is a long tournament and there are many matches. Typically, what would happen is that each team would play the other only once — five matches and many days in between without games that would extend to five to six days. This time around, the players will have to play two matches each and each team is playing with the other teams twice. Consequently, we get a lot more matches to play — 10 matches in the League Stage itself.

SOM: Even Tamil Nadu has hosted a similar kind of the tournament — Tamil Nadu Premier League (TNPL). How do you compare that with the Maharaja Trophy T20 Tournament?

Arjun Ranga: The Karnataka T20 League was the first one that was started and because of this as you know that at one point in time there were almost 14 players in the IPL. Tamil Nadu then took a lesson from Karnataka and they too started the league. And now you see even from TNPL Natarajan has come, Masood Shahrukh Khan and Jagadeesan are there and we have seen a lot of good cricketers coming from smaller towns in Tamil Nadu. Sai Sudarshan as well.

What these tournaments — Tamil Nadu Premier League and Maharaja Trophy T20 — do is that they create IPL ambience at a local setting and expose the experience and skills that the youngsters should get in order to make the cut. Some of the players really flourish in such tournaments and we have this seen in the past. And some of them will realise what they need to improve upon. I see it as a good testing ground for young cricketers. All the main selectors and the stakeholders of big IPL teams will be watching these matches — the visibility of the players is significant.

READ ALSO  KSCA Cricket Stadium for city back in focus

SOM: As the Mysore Warriors sponsor, what can you say about the team composition this time?

Arjun Ranga: For the first time, the KSCA has come up with a new and unique model where they have team sponsors and not team owners. It’s not the franchise model. As a sponsor, we had no role in team selection and the selection was done by the KSCA. I only got to know who my team is only after the selection is over. They had a drafting system this time and the KSCA appointed the selector, coach and assistant coach for the team. I had no choice in that.

But after the team was put in place, I see that they have picked a very well-rounded team. It is a good mix of experience as well as youth and all potential State and National cricketers are in the team.

SOM: Can you please explain how the selection was done without sponsors?

Arjun Ranga: This time, the KSCA followed the drafting system. It works like this: There is a pick that happens and each team gets to pick one player. And then again, every team gets to pick the first choice, the second choice. As a sponsor, I have got a very good team.

SOM: Regarding team composition would you have done something different?

Arjun Ranga: I am happy with the team. For good cricket, a team has to have a solid top order. Our top order is —Karun Nair (probably the best opening batsman) and we have accomplished cricketers Nihal Ullal, Pavan Deshpande and Naga Bharath. And then you need a solid middle order with a mix of batsmen and bowlers. Here we have batsmen and all-rounders Shreyas Gopal, Shubhang Hegde, S. Shivaraj, Bharath Dhuri and Lochan Appanna. We also have an excellent order of fast bowlers — Prateek Jain, Vidhyadhar Patil and Aditya Goyal. Overall, we are well-covered and we have a heady balance. The only thing is that they have to perform on the given day.

The team is raring to go: Coach Shashikanth

P.V. Shashikanth is the head coach of Mysore Warriors. Hailing from Mannagudda in Mangaluru of Dakshina Kannada District, he is an Indian former first-class cricketer who played for Karnataka from 1987-88 to 1996-97. He captained Karnataka to victory in the Moin-ud-Dowlah Gold Cup Tournament in 1994 and in 1996-1997 he won the Irani Trophy for Karnataka against the Rest of India. In April 2017, he was appointed head coach of the Karnataka Senior Team and in 2018, he was appointed as the coach of the Mizoram Cricket Team by BCCI.

He has worked very closely for almost 4 to 5 years with the current Indian players such as K.L. Rahul, Prasid Krishna, Manish Pandey, Mayank Agarwal, Abhimanyu Mithun and a host of others. He has also worked as the assistant coach in the developmental squad for Royal Challengers Bangalore. He spoke with Star of Mysore about the team and its prospects.  Excerpts:

Star of Mysore (SOM): As an experienced coach, how do you rate the Mysore Warriors team?

Shashikanth: It is a blend of both experienced as well as young talent. We have the likes of Shreyas Gopal, Shubhang Hegde, Pratheek Jain, Lochan Appanna, Nithin and Vidhyadhar Patil and others who have already made a mark in test cricket and KPL and we have also the youngsters who have really done well in the recent T20s. We hand-picked them in the draft. We have an exciting talent — batsmen, fast-bowling and spinning all-rounders, off-spinners. All of them are doing well in their respective departments and the team morale is at an optimal level.

SOM: With rain disrupting team bonding and practice sessions, how are the team members gelling with each other?

Shashikanth: Unfortunately, we had no time for bonding and practice due to inclement weather. But all are upbeat and there is a unifying spirit among themselves. I can see the hunger in them and they are raring to go, in fact.

SOM: Any strengths of the team you would like to mention?

Shashikanth: I think we have all our bases covered. Batting-wise we are really good and we have got enough all-rounders on the bowling side too. Overall, it is a heady mix of experienced players and youngsters. All of them have the passion and desire to improve every day.

SOM: How is it to coach a team like Mysore Warriors?

Shashikanth: I have been entrusted with a huge responsibility and I am confident that I will live up to the expectations. As I said on an earlier occasion, being associated with a team like Mysore Warriors serves a double purpose — being able to groom and coach some talented players and to be associated with the reason of bringing everyone together for the love of cricket.

We will put our best foot forward: Captain Karun Nair

Karnataka cricketer Karun Nair is the Captain of Mysore Warriors and he has an excellent track record. He made his ODI debut in 2016 against Zimbabwe and Test debut against England. He is the second Indian cricketer to score a triple hundred in a test match and the only third cricketer in the world who was able to convert his first century into a triple century.

Karun Nair is the current member of the Karnataka Ranji Trophy Team and captained Karnataka Senior Team and Mysore Warriors in 2017. He played for Mumbai Indians, Rajasthan Royals, India A, Delhi Capitals, Kings XI Punjab, Sunrisers Hyderabad, Kolkata Knight Riders in the IPL. Star of Mysore spoke with him amidst his tight schedule. Excerpts:

SOM: Can you give some insights to the team?

Karun Nair: It is a very good team and we have a good blend of all-rounders, seniors and juniors and we are looking forward to playing some good and exciting cricket.

Karun Nair: We are the best franchise in the tournament and so we have made sure that everything is in order and the morale is high. There is a positive environment around and we are looking to perform well in the tournament.

SOM: Rain has washed out your practice sessions and there is a fear that it will rain during matches.

Karun Nair: We cannot control the weather and we just have to go with whatever we have on a particular day. But we are hoping that it will be clear weather, facilitating exciting matches. We are keeping our fingers crossed.

SOM: How have the preparations been so far?

SOM: How does it feel to lead a team?

Karun Nair: We have good batsmen and good bowlers. We are going as a well-rounded unit and as a team, we have good strength in place and we will see it once we are on the ground. As and when we play, we will get to know each other better and also our skills will be on display. If there is a scope for improvement, we will definitely do it.

Matches in Bengaluru at Chinnaswamy Stadium