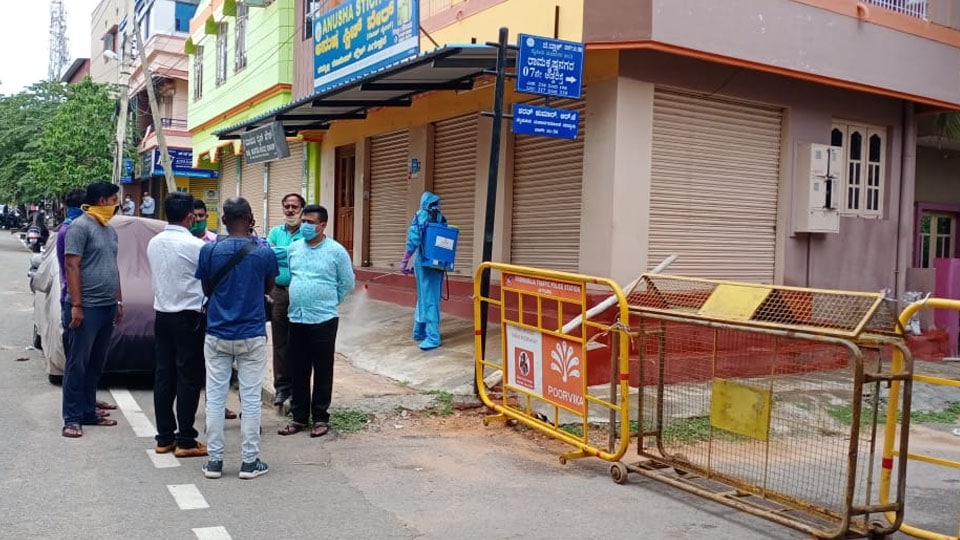 Mysore/Mysuru: Several districts of Karnataka have a common tale of woe: They are unable to contain the spread of COVID-19 pandemic due to migration of people from Maharashtra — those coming from Mumbai and Pune.

There has been a huge increase in the number of COVID positive cases in Mandya, Kalaburagi, Vijayapura, Yadgir, Bidar, Raichur, Belagavi and Udupi districts ever since movement of migrants was allowed, especially from Maharashtra.

This morning two women who arrived from Bengaluru to Ramakrishnanagar in Mysuru on Sunday night tested positive. They had a travel history of Mumbai. As such, Ramakrishnanagar G-Block 5th, 6th, 7th, 8th and 9th Cross have been sealed down. But the two COVID positive cases does not come under Mysuru’s account but will come under Bengaluru.

From Thane to Bengaluru

The two women arrived in Mysuru from Mumbai via Bengaluru and one among them is in sixth month of pregnancy. The pregnant woman, her husband and her mother had come to Bengaluru from Thane in Maharashtra.

The trio arrived from Mumbai to Bengaluru in a flight on Sunday. At the Kempegowda International Airport, the husband, wife and her mother were screened along with other passengers and their throat swabs were collected and were sent to laboratory for tests.

The swab test report which was received yesterday night declared them positive for COVID-19. Health officials in Bengaluru informed the couple about them testing positive and asked them to stay in home quarantine.

As per the rules released by the State Government, institutional quarantine is exempted for pregnant and aged women. As such, they were asked to be in home quarantine and report to health officers if they have any symptoms. But the pregnant woman’s husband was shifted to COVID Hospital in Bengaluru.

On Sunday night, the pregnant lady and her mother took a taxi and reached their house at Ramakrishnanagar G-Block. Learning about the pregnant woman’s travel to Mysuru in a taxi along with her mother, health officials informed Mysuru Deputy Commissioner Abhiram G. Sankar who directed the officials to shift the women to the designated COVID-19 Hospital on KRS Road.

The DC and officials have instructed other family members to be under home quarantine. The DC also instructed the residents of the area not to panic and not to pay heed to any rumours. As they were told to maintain social distancing, the two women did not mingle with any of the other family members and were staying in a separate room above their house. Even the food was not shared between the family members.

Not leaving any chances, after the women were shifted to the COVID-19 Hospital, the MCC’s Abhaya team sprayed disinfectants to the house, the road where the house is located and the surroundings of the house. They have also sealed down the area and barricades have been put up on the roads.