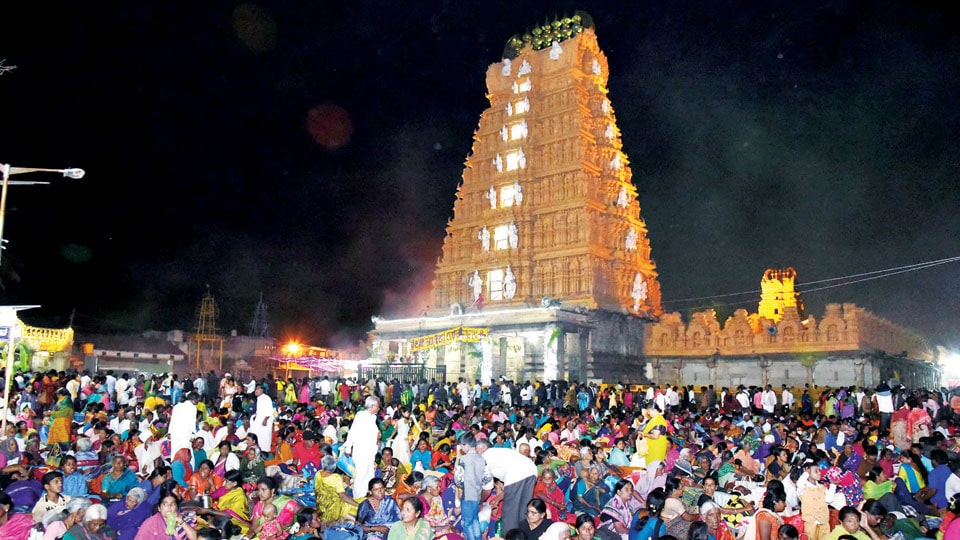 Mysore/Mysuru: Mahashivaratri festival was celebrated with traditional zeal and fervour in the city yesterday. Devotees made a beeline to many Shiva temples across the city, right from early morning. Some devotees also observed fast and kept night vigil, in keeping with the traditional practice.

Braving the scorching sun, devotees queued up for darshan at Trinayaneshwara Swamy Temple in the Palace premises, where the deity of Lord Shiva was adorned with a 11-kg golden mask (Chinnada Kolaga), gifted by the erstwhile Mysuru rulers in 1952 following the birth of Srikanta Datta Narasimharaja Wadiyar. The Kolaga was brought from the District Treasury to the Temple on Thursday under tight police security. The puja began at 4.30 am, with the temple priests performing Rudrabhisheka, Bilwarchane and other rituals, following which the temple was opened for devotees, who continued to throng the temple till midnight.

Homas and special pujas marked the celebrations at Avadhoota Datta Peetham on Nanjangud Road. The Nada Mantapa in the Ashrama premises was specially decorated for the festival and cultural programmes were held.

The MCC authorities checked the quality of Prasada and food served to the devotees.

Today, the deity of Chandramouleshwara temple at Mathru Mandali circle was taken in a procession in the main thoroughfares of the locality.

Nanjangud:  Srikanteshwara temple in the Temple town, popularly known as ‘Dakshina Kashi,’ was a beehive of activity from dawn on Friday. Thousands of devotees thronged the temple and the temple authorities had made special arrangements to facilitate the devotees to have early darshan.