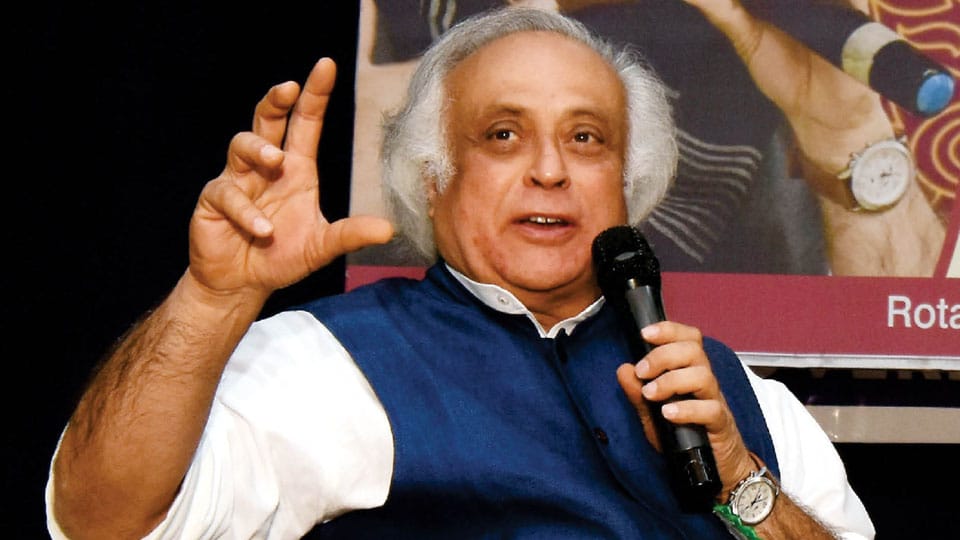 Mysore/Mysuru: Vengalil Krishnan Krishna Menon (V.K. Krishna Menon) continues to draw our attention not just because he was Jawaharlal Nehru‘s confidant and political soul-mate but also for many of his own political and literary accomplishments.

A relentless crusader for Indian independence in the UK in the 1930s and 1940s, he was a global star at the United Nations in the 1950s before he was forced to resign as Defence Minister in the wake of India-China war of 1962. Meticulously researched and based entirely on new archival material, Rajya Sabha MP Jairam Ramesh’s biography, ‘A Chequered Brilliance: The Many Lives of V.K. Krishna Menon’, reveals Menon in all his capabilities and contradictions.

The Mysore Literary Association, headed by Prof. K.C. Belliappa as its President, had organised a programme to launch Jairam Ramesh’s book at Rotary West auditorium in Saraswathipuram yesterday. Retired diplomat Ravi Joshi was in conversation with the author.

“This new biography does not intend to eulogise Krishna Menon for his numerous contributions nor to castigate him for his many sins. It is instead meant to be a clinically objective narrative of his chequered life. I narrate a complex tale letting the written materials speak for themselves,” he said.

“For Menon to find a place in today’s politics, you need a Nehru, because Krishna Menon would not have been Krishna Menon had Nehru not embraced him intellectually and given him space, got him into politics, got him elected to the Rajya Sabha and then the Lok Sabha and inducted him into the Cabinet,” Ramesh said.

On Sardar Vallabhbhai Patel, Jairam Ramesh said that both Nehru and Patel were united by differences and both helped India navigate the most turbulent period in the history of India. “Most of the people think Nehru and Patel were enemies but they were just rivals, opponents and adversaries and surely not enemies because they were united by differences. Both believed in strong republican democratic India. It has to be remembered that India survived the trauma of 1947 largely because of the combined leadership of Nehru and Patel who functioned as Jugal-Bandi,” he said.

Further explaining how Nehru and Menon did not believe in the Soviet political system he said, “India was the only country in the world which started out as a socialist with a democratic system. All socialist countries were communist in nature. Neither Nehru nor Krishna Menon believed in the Soviet political system but was impressed by Soviet Union’s achievements in the field of industries, rocket science and space,” he said.