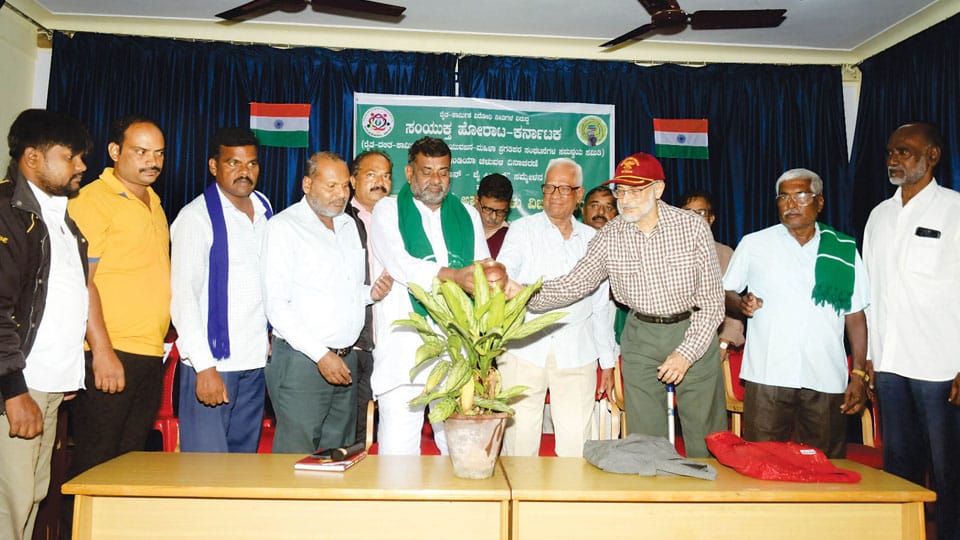 Mysore/Mysuru: Maintaining that the Centre’s ‘Agnipath’ Army Recruitment Scheme is neither effective nor productive from any point of view,  Maj. Gen.(Retd) S.G. Vombatkere urged the Centre to drop the scheme in the better interests of the country.

He was speaking on the topic ‘The Dangers of Agnipath Scheme’ at the  ‘Jai Jawan-Jai Kisan’ Conference organised by Samyukta Karnataka – Horata as part of Quit India Movement Day at the Institution of Engineers on JLB Road here on Tuesday (Aug. 9).

Pointing out that as per the provisions of Agnipath Scheme, 60,000 young soldiers will be recruited every year with a service period of just 4 years, Vombatkere said that it is concerning to note that 75 percent of these soldiers will be out of jobs after four years.

Wondering how we can take on our hostile neighbours such as China and Pakistan if there are less number of soldiers, he reiterated that the Agnipath Scheme was not in the interests of the country.

Stating that recruitment under the Scheme has already started, Vombatkere wanted the Government to consider this as a pilot project and to revert back to the old system of Army recruitment, which he said was a better option to strengthen our military ranks.

Recalling the day (Dec. 10, 1962) when he took oath while joining military service which was administered by the  then President of India Dr. S. Radhakrishnan, Vombatkere said he remains committed to the oath even today.

KRRS President Badagalapura Nagendra, in his address, said that a mass movement sans any leader will take shape in the country for bringing about real changes in the country’s administration.

Maintaining that there was no difference between the current Modi administration and the rule of Britishers in the past, he said that while the British divided the society on caste and region lines, the Modi Government is dividing the society by promoting communalism, capitalists and fascist forces.

Accusing Prime Minister Modi of having little respect for the Constitution, he said that the movement is aimed at driving out the current dispensation, just as the Quit India Movement was launched decades ago to drive out the British.