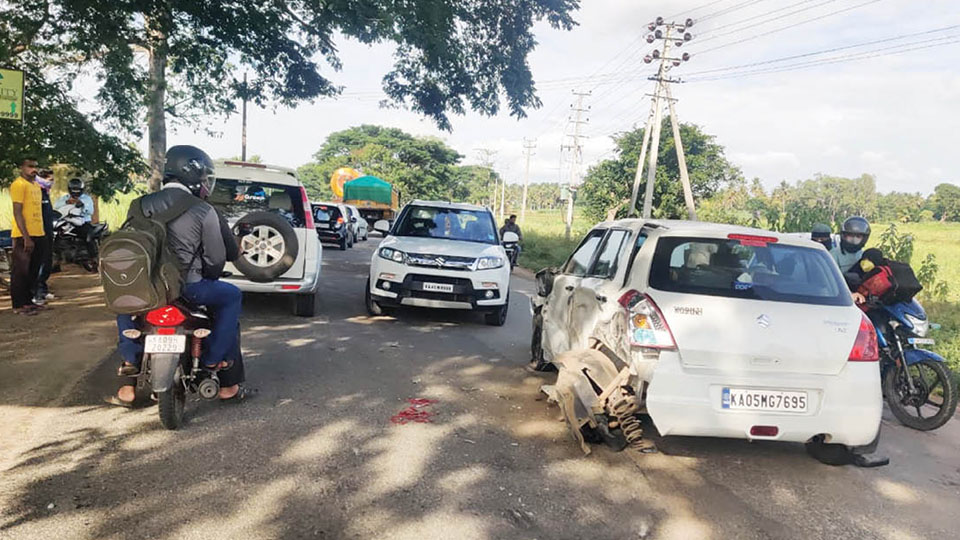 Two injured in a three-vehicle accident

Srirangapatna: The brighter side of the lockdown is that there are less accidents as many people postpone their travel plans and remain closeted indoors. The dark side of the unlock process, however, is that it causes accidents as maximum number of vehicles will be on roads.

Three vehicles were damaged and two persons sustained injuries on the Paschimavahini-Konanuru Road at Srirangapatna this morning as the road witnessed bumper-to-bumper traffic. Mandya district eased lockdown relaxations following an order by the State Government as the positivity rate has declined drastically.

As soon as the restrictions were removed at 6 am today, many private vehicles got onto the roads and headed towards Hassan, Kodagu and Sakleshpur. As the traffic was heavy on both sides of the narrow road, it led to minor traffic jams and accidents. Two car passengers sustained injuries when the driver was overtaking a truck on the road. The car (KA-05-MG-7695) collided with another car that was coming from the opposite side.

Due to the impact, the side portion of the car brushed with the truck that was being overtaken and fortunately, the car did not turn topsy-turvy. The injured were treated at Srirangapatna Hospital. The accident resulted in a big traffic jam and the Police had a tough time in clearing the road.