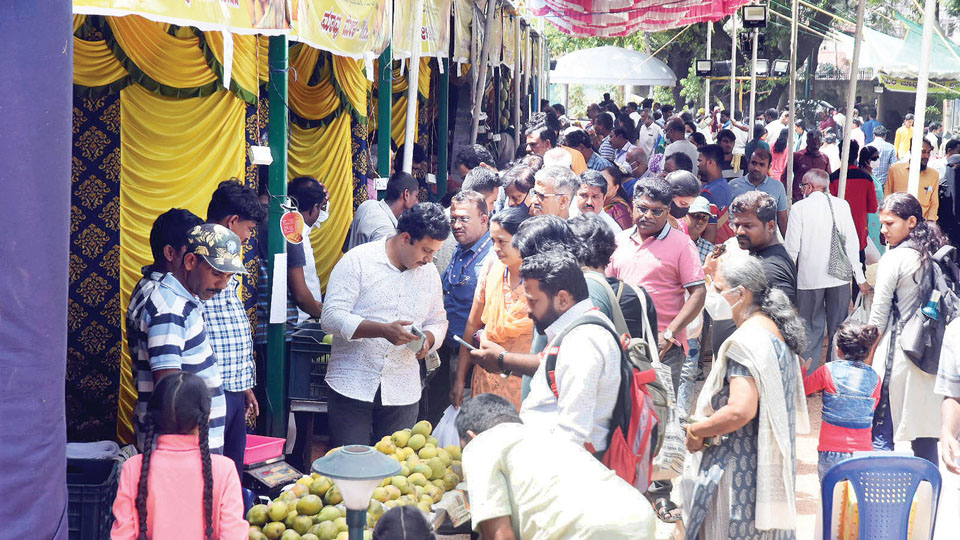 Couple of costly gadgets missing in the melee; customers say no CCTV surveillance

Mysore/Mysuru: The three-day Mango Mela that began at Kuppanna Park in city yesterday turned extra sweet for mobile phone thieves as they managed to snatch a couple of mobile phones from customers who were immersed in selecting mangoes and tasting samples handed out to them by the growers.

There has been a good response to the Mela organised by the Horticulture Department and the Zilla Panchayat.

The Mela attracted huge crowds in the evening and the brightly lit Kuppannna Park also extended an open invitation to hundreds of tourists who had come to the city. Also, many regular walkers too went there to carry the fruits home.

Srinivas, a resident of Jayalakshmipuram, told Star of Mysore that four to five customers who came to buy mangoes lost their mobile phones. His wife Shobha told this newspaper that seeing the crowds, the thieves had grabbed the opportunity.

“We had gone to the Mela at 6 pm and there were heavy footfalls. We went around two to three outlets, checking out the varieties. By then, my husband realised that his mobile phone, kept in his pocket, was missing. We went back to the shops but we could not find the gadget,” Shobha said. She said that four to five other people too were searching for their mobile phones. One of the customers said that while tasting samples, he had kept the phone on a table and it went missing in a jiffy.

“Someone called the Police Control Room and the staff informed us that a Garuda team will come to help us retrieve the stolen mobiles. The team came after 30 minutes and asked us to file a complaint along with the details of the phone, its make and other documents. As all the documents were at home, we did not lodge a complaint,” Shobha said.

READ ALSO  Kuppanna Park to be developed as tourist hotspot

“We alerted the Horticulture Department and they answered back irresponsibly. The least that they could do is to utter some assuring words. They have organised such a big Mela and there is not even a single CCTV camera to monitor crowd movements. Fed up with their attitude, we stood at the Mela gate and warned a few customers to watch out for their mobile phones,” she added.

The Police and the organisers must act immediately otherwise people who come to buy mangoes for Rs. 100 or Rs. 150 will end up losing cell phones worth thousands of rupees, she said.