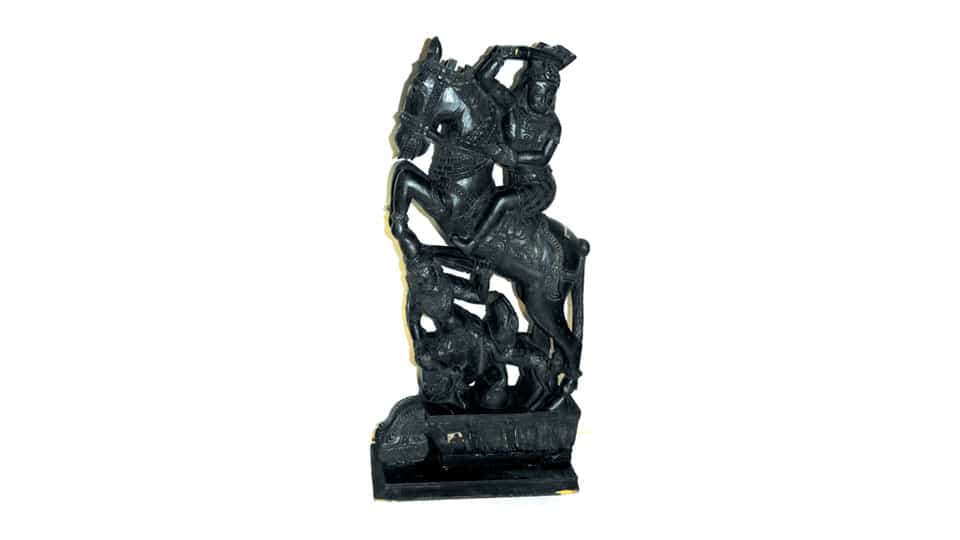 Mara Sirpam: Wood craft of Chettinadu on display at IGRMS

Mara Sirpam — Wooden horse rider — is the decorative object particularly in Chettinadu community. The wood carving is famous in Chettinadu region which is promptly applied in their architectural patterns like doors, ceilings and other     wooden structures.

Generally Burma wood or teak wood is used for carvings. The rider or protagonist on horse is carved meticulously, and can be seen from two sides. And under the feet of horse, a demon holding sword along with an identified animal is also carved. The carvings symbolically show the cult of hero worship.

Chettiar or Chetti is a title used by various mercantile, agricultural and land owning castes in South India, especially in the States of Tamil Nadu. Chettinadu is the home of Nattukottai Chettiars (Nagarathar), a prosperous banking and oil business community residing in the region of Chettinadu in two districts of Sivaganga and Pudukottai of Tamil Nadu.

Karaikudi is known as capital of Chettinadu which includes several villages. The place is often publicised as a temple town in the region which comprises mainly in Karaikudi and a cluster of 96 surrounding villages. But in course of time, the number of villages have been reduced to 73 villages.

In the 19th and early 20th centuries, many residents of Chettinadu migrated to South and Southeast Asia, particularly Ceylon and Burma. The community is organised around 9 clan temples, each member of the Chettiar community belongs to a clan and each clan has its own temple. They have Ayyanar shrines and Mariamman temples.

Chettinadu is rich in art and architecture and is well-known for its houses embellished with marble and Burma teak, wide courtyards, spacious rooms. Local legends tell that their walls were used to be polished with a paste made out of egg whites to give a smooth texture.

The art and craft of Chettinadu is distinctive, the wood carving through its carved roof gables, lathe-turned columns, carved window and decorated wooden ceilings.

The front door of the each household has carvings of Hindu deities and auspicious motifs like the hamsa, swan, padma, poornakumbha, Kamadenu etc. The other carved wooden items include small shrines and deities.

IGRMS Mara Sirpam
Get set for a bumpy ride this Dasara: City Corporation clarifies
Gorillas in the Government

2 COMMENTS ON THIS POST To “Mara Sirpam: Wood craft of Chettinadu on display at IGRMS”