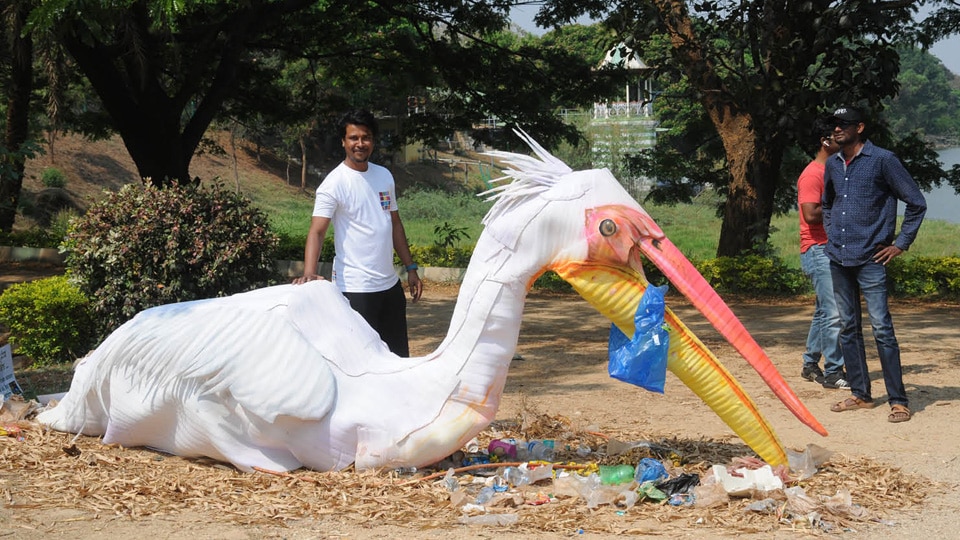 Mysuru: A massive cleaning drive was organised by over 800 people including morning walkers and members of various supporting organisations at Kukkarahalli Lake this morning.

The three-hour drive commenced at 6.30 am at the   main entrance of the Lake, near the Railway Crossing, Saraswathipuram.

The drive was organised by 16 organisations, including University of Mysore, Young Indians, Confederation of Indian Industry, Mysore Grahakara Parishat, Let’s Do it! Mysore, Kukkarahalli Kere Ulisi Samiti, Green Mysuru and others.

The cleaning drive yielded about 1.5 truckloads of garbage which included plastic bottles, paper cups, plates, liquor bottles and other littered refuse. Surprisingly, the area adjoining Hunsur Road yielded a huge collection of liquor bottles and bone pieces indicating that people sneak in to the Lake through the fenced border at night and indulge in partying. 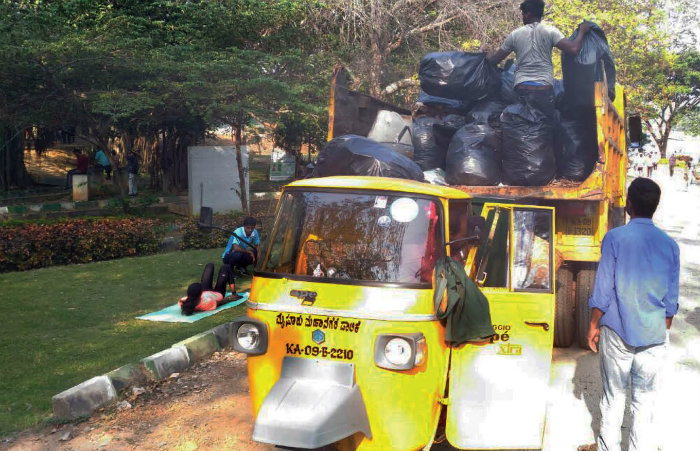 The garbage being loaded into an auto after the cleaning drive.

The cleaning drive was launched by In-Charge VC of University of Mysore Prof. C. Basavaraju. He assured to beef up security during night to prevent straying of miscreants. He also reassured to reopen the closed toilets at the Lake immediately. An exhibition of over 120 photographs of birds, nature and flowers captured by professional lens men and morning walkers were put on display at the Lake premises.

A themed cynosure of all eyes was a huge replica of a pelican standing 6 ft and 18 ft broad with colourful long beaks trying to pick up something from the garbage littered in front of the bird. The image sends an awareness wave among people on cleanliness of environment. The ‘Pelican’ was placed near the main entrance gate.

The replica of the Pelican is elegantly made by Yoganand, an artist and a post-graduate from Chamarajendra Academy of Visual Arts who has made the structure using binding wire, cloth and thermocol. Mysore Varsity Registrar (Evaluation) J. Somashekar and EMRC Director M.R. Gangadhar were also present during the launch of cleanliness drive.