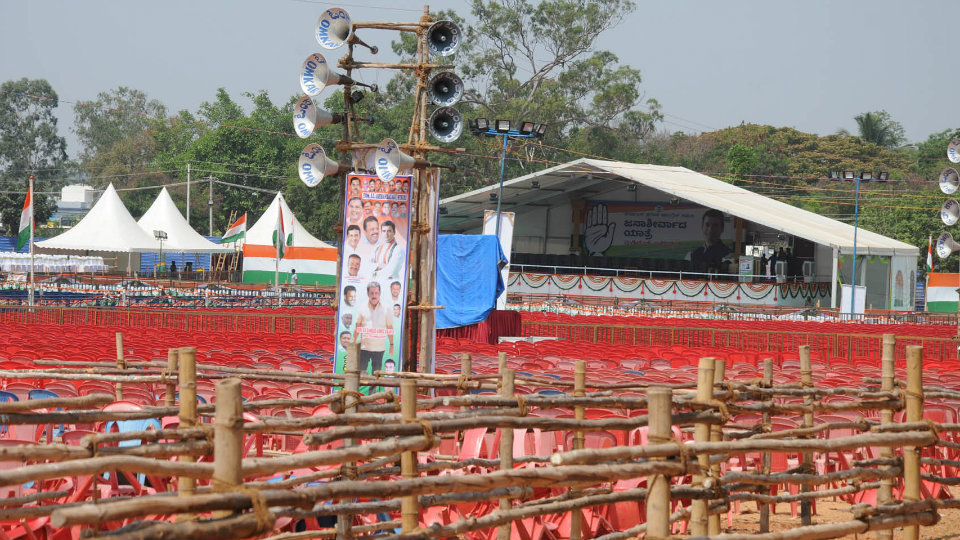 Mysuru: All eyes are on Mysuru as Congress President Rahul Gandhi is set to hold a public rally at the Maharaja’s College Grounds in city at 4 pm today where Prime Minister Narendra Modi and BJP President Amit Shah had addressed massive public rallies earlier. It will be a show of strength by Congress.

Party leaders are hoping to attract a huge crowd for the public rally and are leaving no stone unturned to make the rally a grand success.

Congress leaders claimed that over two lakh chairs have been placed at the Maharaja’s College Grounds to accommodate the crowd though in reality there are about 80,000 chairs.

Party leaders, however, said that they were expecting over  two lakh people.

Today is the second day of Rahul’s Mysuru region visit that he began yesterday morning  after performing puja to Goddess Chamundeshwari atop the Chamundi Hill.

He also interacted with the students of Maharani’s College yesterday and addressed public rallies and held road shows at Chamarajanagar, Santhemaralli, Yelandur and Kollegal, all Congress bastions.

Rahul began his day today with a top-secret meeting with Assembly Speaker K.B. Koliwad at the Government House at Nazarbad in city.

After meeting Koliwad, Rahul had breakfast at the Government House and the food was arranged by District Minister Dr. H.C. Mahadevappa. Rahul’s breakfast and yesterday’s dinner menu was, however, kept confidential. Even people close to Mahadevappa and his personal secretary were instructed not to speak to the media about the food. Sources, however said that the traditional ‘Naati Koli’, ‘Ragi Mudde’, ‘Kaai Obbattu’ figured in the menu.

In his speech, Rahul concentrated on issues concerning the party and ways to strengthen it at the grassroots with the block leaders.

The Congress chief said he wanted the party to be an instrument of dialogue with people from all corners, all religions, all ethnicities, all ages and gender.

He also advised State party leaders against making personal comments on opposition BJP leaders and instead engage them on national and  local issues.

After addressing the meetings, Rahul flew to Hassan at 11.15 am to attend the funeral of Belur MLA Y.N. Rudresh Gowda who passed away yesterday. Interestingly, Chief Minister Siddharamaiah arrived at Government House only at 10.45 am.

Rahul Gandhi will hold a road show from Srirangapatna to Mysuru and thousands are expected to participate.

Local Congress leaders have planned to mobilise massive crowds on both sides of the road. The Mysuru-Bengaluru Highway has been blocked for traffic and alternative arrangements have been made. The road show will culminate at Maharaja’s College.

For the rally, over 600 KSRTC buses have been arranged to ferry people from Mysuru, Mandya, Chamarajanagar and Kodagu and over 500 private vehicles including tempos, jeeps and SUVs have been arranged. At Maharaja’s College, the rally venue, a giant stage has been set up.

Sources said that only five to six persons will be allowed to sit on the stage along with Rahul Gandhi.

The dignitaries who will sit with Rahul will be decided by the Special Protection Group sleuths as per protocol.