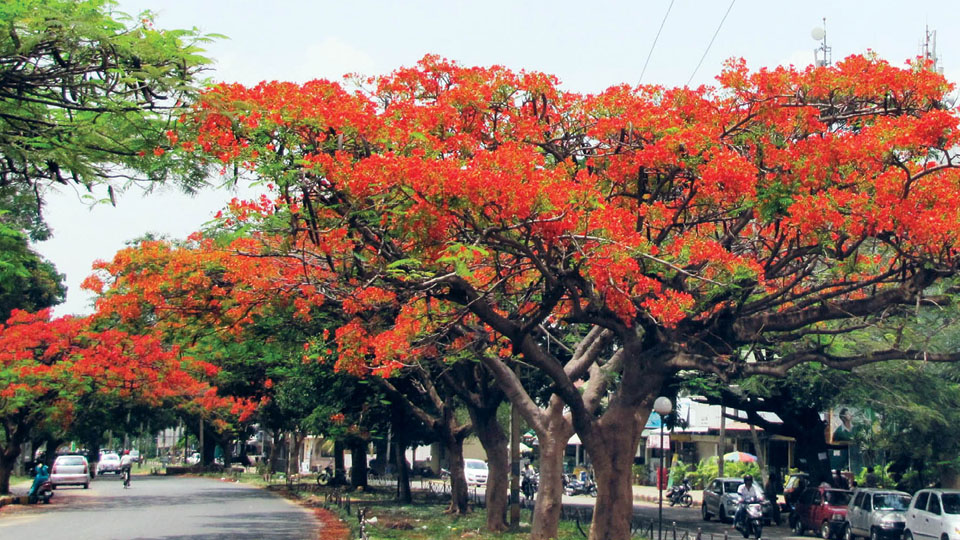 May Flower(s) paint the city red!

Come May, the hot summer month,  most of the spring season (vasantha ruthu) trees and other  plants would have already  unravelled their floral beauty.  On the other hand, two divergent plant species, a tree and a herb  with the same common name  ‘Mayflower’ mesmerise the onlookers  with their  glitzy red blooms. One is ‘Gulmohar’ tree and  another is ‘Football lily’, a herb.   Both are high up with charming blooms during this month. That is why they are  known as ‘Mayflower(s)’. These red bloomers are flowering in  our city now in various places (avenues, parks and gardens) attracting  the attention of the passersby.

Gulmohar (Delonix regia)  is an avenue tree (‘Gul’ meaning flower and ‘mor’, a peacock, peacock like) covered with flamboyant clusters of flame-red flowers displayed  in almost leafless condition. It is noted for its fern-like leaves and extravagant display of orange red blooms. It is also known as ‘Royal Poinciana’ or ‘Flamboyant’. As  the  peak flowering occurs during the Pentacoast (50 days after “Easter”) it is also known by the name ‘Pentacost tree’ or ‘Holy Ghost tree’ in Mumbai area.  The Kannada name is ‘Kattikai” & ‘Doddaratnagandhi’.  Some call it as ‘flame of the forest’, which is a misnomer. Butea monosperma (Mutthuga) is the  real flame of the forest  belonging  to the same family.

Football lily also known as ‘Monsoon Lily’, ‘Blood lily’ and ‘Fireball’ is a small  bulbous monocotyledon,  native to tropical Africa. In Kannada it is known as ‘Boo chakra hoovu’. It’s scientific name is Scadoxus multiflorus  (syn., Haemanthus multiflorus) belonging to Liliaceae  family and related to onion plant.  The floral form is a novelty as the inflorescence is big and spherical, resembling the football, with its numerous scarlet flowers grouped in a large round umbel on top of  a long stalk.  The arrival of the flowers every year will be a welcome surprise as they shoot up suddenly from the subterranean tuber (under ground stem).

The floral-ball, emerging out amidst the greenery, makes a majestic appearance though for  a short and sweet duration. The leaves  which appear later are bright green and attractive.  The bulbs multiply each year.

Both have high ornamental value. While the  floral ball of Football lily is short lived for a week or two, the Gulmohar blooms are long-lasting  for  several weeks.  Interesting feature is all parts of ‘football lily’  are poisonous, reminding one of vishakanye’of  puranas, a charming woman with a venomous body. Toxicity is due to lycosine and other alkaloids. Nevertheless, one need not be afraid of their  toxic nature as it is not fatal. The plant is absolutely safe to grow in your gardens. But  do not forget to  wash hands thoroughly with soap after handling the plants.

In contrast ‘Gulmohar’ with is non-poisonous  & flower buds are edible & used for flavouring.  Besides, the tree provides shade.  Interestingly football lily, an annual quietly  disappears in to the ground  and  unaffected by  the rain and the wind.  Whereas Gulmohar, a perennial with  its shallow roots is likely to fall down during heavy wind and rain fall.

While gulmohar, loftly holding its floral-spray, is omnipresent (even in lanes and by-lanes),  the lily, mostly restricted to certain home gardens and a chance meeting in gardens and parks.

In my view these ‘Mayflowers’ leave a lasting impression in the hearts of plant lovers with their showy red blooms in red hot May. Are they not painting the city red?