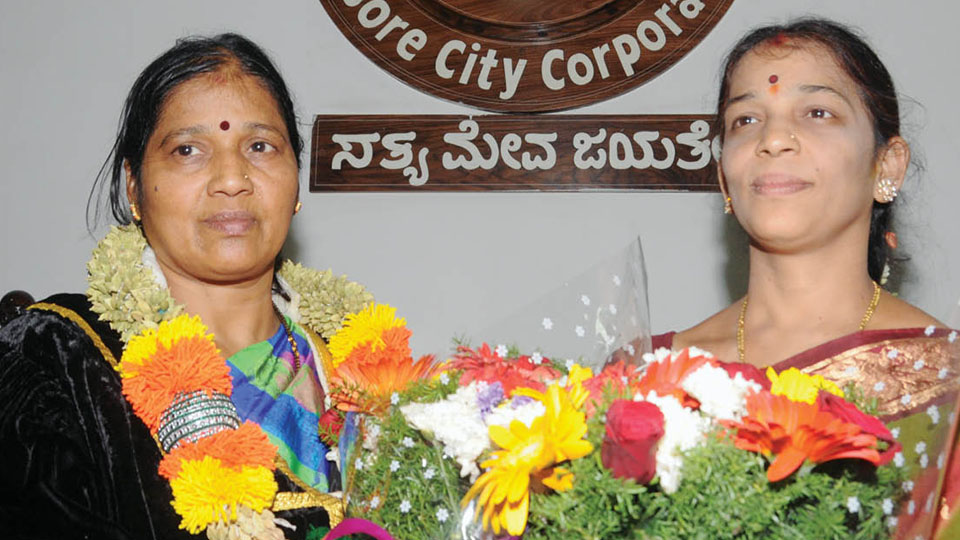 Mysuru: S. Bhagyavathi, who at the Eleventh Hour shifted loyalties from Congress party to JD(S)-BJP alliance, was elected as the 31st Mayor of Mysuru amidst chaotic scenes at the Nalwadi Krishnaraja Wadiyar auditorium of Mysuru City Corporation (MCC) this morning.

With Bhagyavathi (Scheduled Caste candidate) being elected as the Mayor, the JD(S) and the BJP continued their alliance even till the last term (this is the fifth term) of the MCC that will end on Sept. 4 this year. While JD(S) and the BJP Corporators and MLAs raised their hands voting for Bhagyavathi, Congress Corporators staged a walkout, shouting slogans, calling the elections illegal.

It was free-for-all at the election venue and its surrounding rooms this morning as Congress, JD(S) and BJP Corporators and supporters indulged in fisticuffs in support of their candidates. The Congress had hoped to have its Mayor, in the CM’s home district, after a long gap.

In most of the local self-governing bodies in Mysuru, power to the Congress party has been elusive where either the JD(S) or the JD(S)-BJP combine is the ruling party. However, this time, the Congress had planned to reverse this phenomenon by effectively playing the reservation card and was ready to wrest the last term of the Mayor.

As per a special gazette notification issued by the Urban Development Secretariat on Jan. 1, the Mayor’s post was reserved for Scheduled Caste woman and the Deputy Mayor’s post for Scheduled Tribe woman. As per the reservation list, there were two eligible candidates for Mayor’s post in the Congress — Kamala Uday and S. Bhagyavathi. However, there were none in the present ruling coalition of the BJP-JD(S).

There was stiff competition between Kamala and Bhagyavathi to occupy the Mayor’s post and they had met Chief Minister Siddharamaiah along with their supporters lobbying to occupy the City’s First Citizen’s Post.

In-charge Regional Commissioner Shivayogi C Kalasad was the Returning Officer for the elections that were scheduled to begin at 11.30 am. Congress leaders, Corporators and supporters, who could not digest the fact that Bhagyavathi had shifted loyalties, staged a protest inside the election hall and also outside the venue and corridors.

They were waiting at the entrance for Bhagyavathi to arrive. Realising this, JD(S) Corporators brought her to the building through the back gate via a lift and made her sit inside Corporator K.T. Cheluvegowda’s chamber. JDS) Corporators had a tough time in bringing Bhagyavathi inside the Nalwadi auditorium as Congress Corporators had blocked the way.

Congress Corporators were demanding that the elections must be cancelled as they called it illegal. However, the Returning Officer went ahead with the conduct of elections. This resulted in heated arguments between officers and the Congress Corporator. MLA G.T. Devegowda and Minister Tanveer Sait tried to intervene but they themselves exchanged war of words.

The election proceedings began at 12.30 pm and both Bhagyavathi and Kamala Uday filed their nomination papers. Bhagyavathi’s papers were signed by JD(S) and BJP Corporators as proposers and seconders.

As soon as the Returning Officer Shivayogi Kalasad announced that there were two nomination papers for Mayor’s post and the candidates had five minutes to withdraw nominations, Congress Corporators approached Bhagyavathi pleading her to withdraw nominations. She, however, did not heed to their requests. In the convincing act, five minutes were lost and the Returning Officer announced that there will be a contest between Bhagyavathi and Kamala Uday.

While JD(S) and BJP combine raised their hands in support of Bhagyavathi who secured 43 votes, the Congress Corporators left the auditorium in a huff. Later, the Returning Officer announced that Bhagyavathi was elected as Mayor and Indira Mahesh as her deputy. 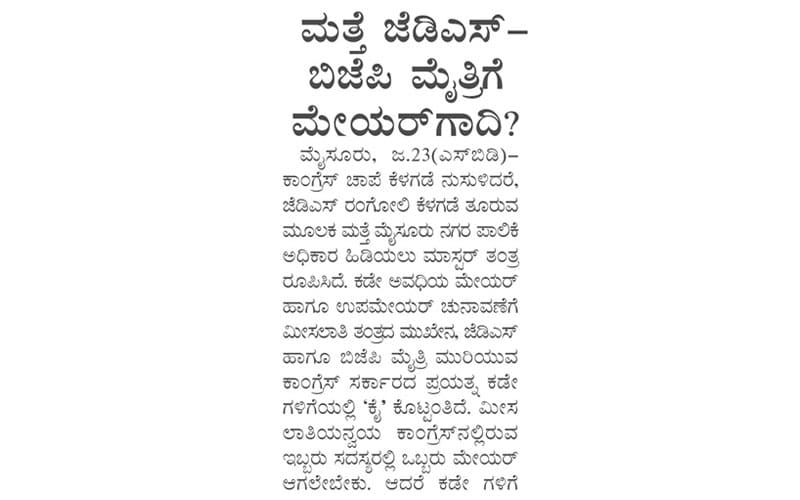 In an interesting development last evening, S. Bhagyavathi of Congress switched over to JD(S)-BJP alliance and had gone ‘absconding’ creating ripples among Congress leaders. Mysooru Mithra, the sister publication of Star of Mysore, had carried an exclusive report this morning indicating that this time too, the JD(S)-BJP combine will rule MCC while the Congress will miserably fail in its strategy despite tweaking reservation categories to its advantage.