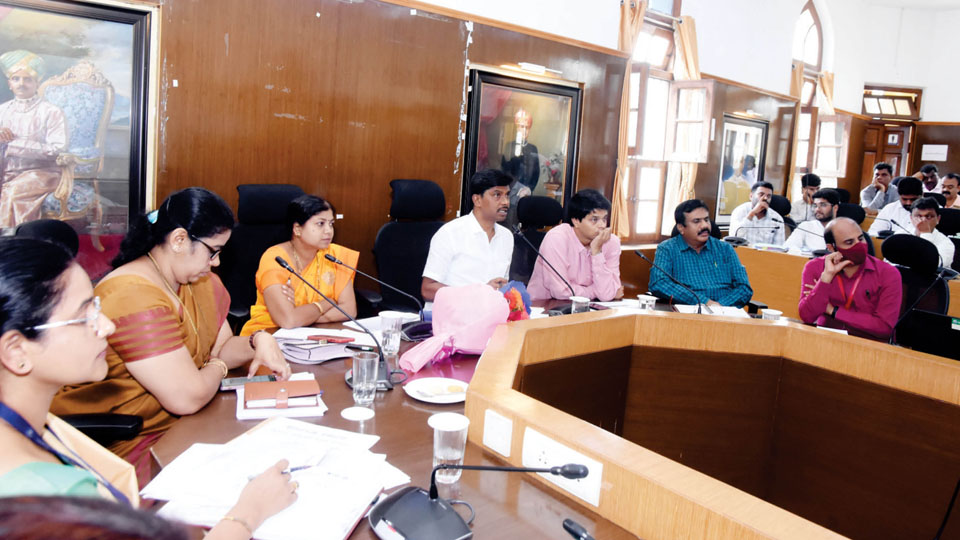 Addressing the meeting, the Mayor directed the officials to extensively tour all the MCC Wards in order to get first hand information on public issues. Asking the officials not to show any lethargy or laxity in addressing people problems, he warned that strict measures will be taken for bringing about administrative transformation, if the officials do not change their mindset. Seeking the co-operation of officials in bringing out functional changes, he asked them to bring any hurdles to his notice.

Noting that he has been receiving several complaints in online payment of taxes, the Mayor wanted to know what was the problem.

MCC Commissioner G. Lakshmikantha Reddy, admitting that there were problems in April and May, said that now the problem has been resolved and online payment system is going on smoothly. Reddy further said that the rentals of commercial buildings and complexes  owned by the MCC would be increased 2-3 fold if the MCC Council approves the hike.

MCC Deputy Commissioner M.J. Roopa said that the authorities have collected a fine of Rs. 31.50 lakh so far from shop-keepers across the city for using single-use plastics despite the strict ban.

During the course of the meeting, the Mayor gave some instructions, which chiefly included blacklisting of advertisers (hoardings and other publicity material exhibitors) who have gone to Courts against the MCC, evacuation of unauthorised hoardings erected at Mall of Mysore, mandatory usage of walkie-talkie given to MCC officials, preparation of an action plan for getting back the cleanest city tag, stipulation of date for celebration of Nalwadi Krishnaraja Wadiyar Jayanthi and measures for repairing ‘Mayor House’, the official residence of the city Mayor located along Cheluvamba Park adjacent  to Akashvani Circle on KRS Road.