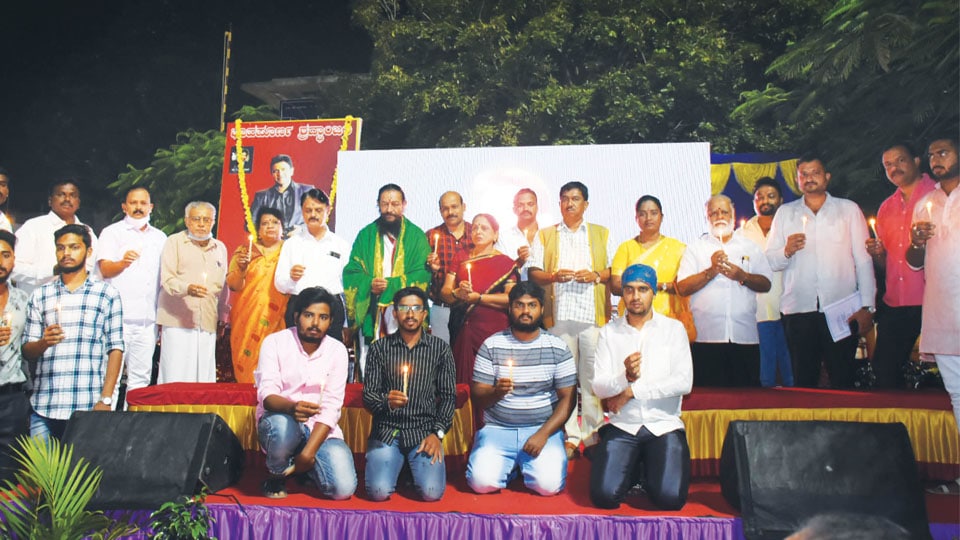 MCC Council to discuss naming of Circle or Road after Power Star: Mayor

Mysore/Mysuru: Mayor Sunanda Palanetra said that the MCC Council meeting will discuss naming a prominent Circle or Road after late actor Puneeth Rajkumar. She was speaking at ‘Appu Namana,’ a condolence programme organised in memory of Puneeth Rajkumar by VKS Foundation at Vivekananda Circle here recently.

Pointing out that the entire Dr. Rajkumar family had a great liking for Mysuru, Sunanda Palanetra said that Puneeth Rajkumar had a special affection for Mysuru and the late actor often used to visit Kukkarahalli Lake, climb Chamundi Hill footsteps and used to dine at popular hotels here.

Noting that most of Thespian  Dr. Rajkumar’s films were shot in the vicinity of Mysuru, she reiterated that following public demand, the MCC Council will discuss naming a Road or Circle in city after Puneeth Rajkumar.

MUDA Chairman H.V. Rajeev, in his address, said that Puneeth had  earned name and fame since he was a child actor. Recalling the versatility of the actor, he said that the actor’s works and achievements should be an inspiration for the present generation.

D. Devaraj Urs Development Corporation Chairman Raghu R. Kautilya, in his address, said that Dr. Rajkumar termed the fans as God. Maintaining that Puneeth Rajkumar too followed in the footsteps of his illustrious father, he noted that most of Puneeth’s films sent a message to the society.