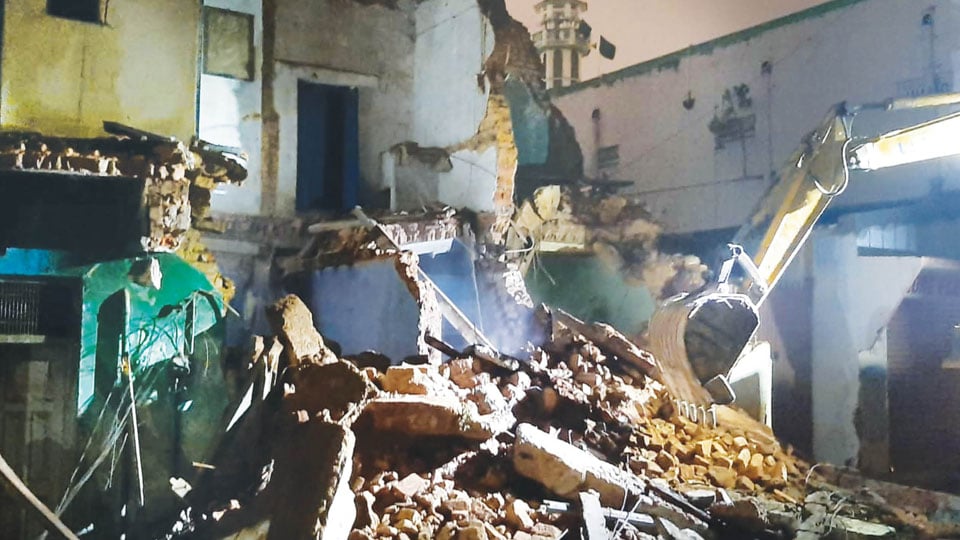 Mysore/Mysuru: A dilapidated building, which was in ruins on Sawday Road in Mandi Mohalla, has been demolished by Mysuru City Corporation (MCC) authorities last night.

The building, which was dilapidated, was on the verge of collapsing due to constant heavy rains that has been lashing across city since a few days and the MCC authorities, as a precautionary step, demolished the building with the help of CESC, Police officials and with the co-operation from the residents.

Former Mayor Tasneem, who spoke, said that the building located on the roadside was in a very dilapidated condition and following heavy rains, a portion of the building had collapsed. Hence as a precautionary step, MCC Engineers and other officials inspected the building, informed the building owner and demolished the building, she added.

MCC Zone-7 Development Officer Rajivnath said that steps were taken to prevent any untoward incidents from taking place during the demolition of the building. Roads were barricaded to prevent people from getting close to the dilapidated building while it was being demolished and the debris have been using two tipper vehicles, he said and added that local residents extended their co-operation during the demolition drive.

Following heavy rains that lashed across the city on Monday night, the compound wall of Jayadeva Hospital (KRS Road) on Kumbarakoppal side has collapsed.

About 20 ft. compound of the Hospital, opposite Adishakti Temple had collapsed and the Hospital authorities who came to known about it yesterday morning, visited the spot and informed Public Works Department (PWD) officials asking them to prepare an estimate of the cost for removing the old compound and constructing a new one in its place.

Hospital authorities said that the PWD officials have been urged to take temporary steps to prevent people and cattle from entering the Hospital premises through the collapsed portion till the works are taken up.