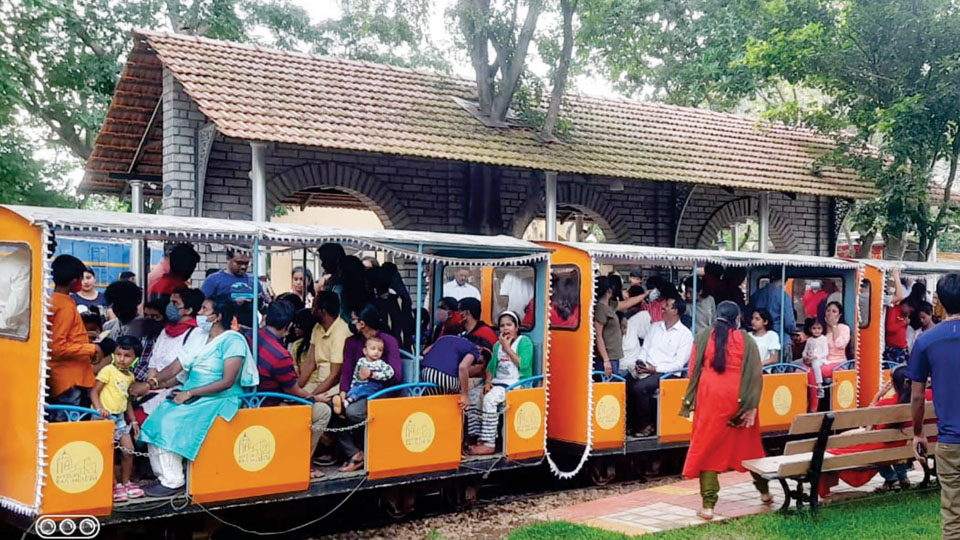 Mysore/Mysuru: The Mysuru Rail Museum has earned the distinction of being one of the most-visited tourist places in Mysuru during Dasara festivities-2021 with a cumulative footfall of 28,733 in the period from Oct.7 to 24, generating a revenue of Rs.13,16,222, the highest so far in the 41-year history of the Rail Museum.

Despite the devastating effect of the Covid-19 pandemic badly impacting the tourism industry, nearly 1.15 lakh people have visited the Rail Museum since it was re-opened in March last year with a couple of disruptions in between.

Railways had extended the working hours of the Museum alongside illumination of the Museum matching the scale and grandeur of the lighting in the city.

The breathtaking view of the illuminated outdoor exhibits like vintage steam locomotives, Toy Train, passenger coaches, freight wagons and other Railway system equipment of a bygone era like cranes, signals, rails and others drew large crowds throughout this period.

During his recent visit to the Rail Museum, Sanjeev Kishore, General Manager (GM), South Western Railway (SWR), Hubballi, appreciated the aesthetics and high standard of cleanliness of the Museum premises. He wanted the Mysuru Divisional authorities to add more artefacts, progressively, that were rare and also important from the heritage perspective as it would help in attracting visitors even from overseas.

An exclusive gallery for rail and wheel sets of different eras as Railways evolved in India and a boom-type lifting barrier in the toy train path would help in educating the people, he noted.

Similar value-added services can also be there so that the present architectural design and landscape will be ideal for transforming the Museum to world-class standards, the GM said.

Rahul Agarwal, Divisional Railway Manager, SWR, Mysuru, stated that the Division was exploring the possibility of roping in big corporate houses for comprehensive management of the Rail Museum under a mutually beneficial long-term business model which helps in value addition, ensuring sustainable development.