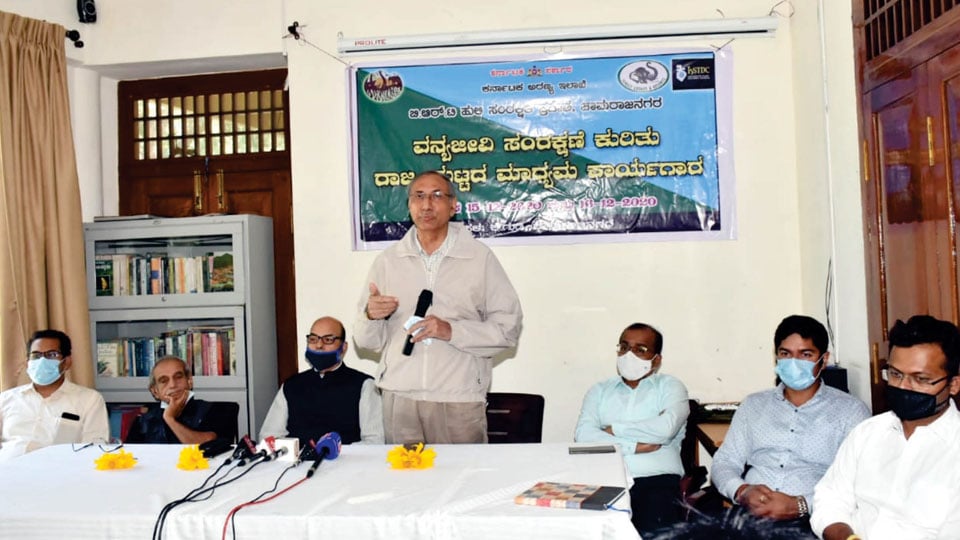 This sanctuary is unique because it has scrub, dry deciduous, moist deciduous, semi-evergreen, evergreen and shola forests. It is also known for its many endemic species of plants including valuable medicinal ones, said Principal Chief Conservator of Forests (PCCF)-Wildlife, Ajay Misra. He was speaking to media persons who are a part of a State-level media workshop on wildlife conservation on Tuesday at K. Gudi that comes under BRT Sanctuary. Misra inaugurated the workshop.

“This forest also nurtures around 800 species of plants from various families. Interestingly enough, the vegetation shows close affinity to the Western Ghats. It is a home to a wide variety of animal species. Conservation of a forest of this type does not only mean saving trees and animals. It also means conservation of fertile soil and biodiversity,” he opined.

After the area has been declared as protected, several measures have been taken by the Forest Department in the field of conservation. There are a lot of challenges involved including man-animal conflict as a huge population of Soliga tribes still lives inside the forests and they are dependent on forest produce to eke out a living, the PCCF said.

When the BRT area was designated a wildlife sanctuary in 1972, shifting cultivation and hunting were completely banned, and the Soligas were allocated small pieces of land to practice settled agriculture.

Soligas can now access and manage the forest resources and their rights have been recognised under the Forest Rights Act. The tribals can now collect, own and dispose of minor forest produce from the reserve. Besides protecting and regenerating forest resources for sustainable use, they can also hold customary practices like worshipping sacred places, Misra said and outlined the challenges faced by the Department.

The cooperation of tribals is vital if tigers as well as other wild animals of the reserve forest are to be conserved. “We have taken measures to improve the habitats of both the predator and the prey. Anti-poaching measures and steps to prevent fire as well as conserve water have been put in place,” he said.

Conservation education in BRT has been a means of reaching larger audiences. “We have established conservation priorities and shared research findings on resource management with the tribal community and community-based organisations. Education and awareness programmes have helped in reaching the community better,” Misra revealed.

On the intention of organising such workshops, the PCCF said that media plays an important role in shaping public perception of human-wildlife interactions.  “This initiative is aimed at putting human-animal conflicts in their correct perspective. Such workshops essentially provide the most recent knowledge about wildlife and their contact with people. We have organised such workshops since three years and we feel that media positively influences community behaviour towards wildlife,” he added.