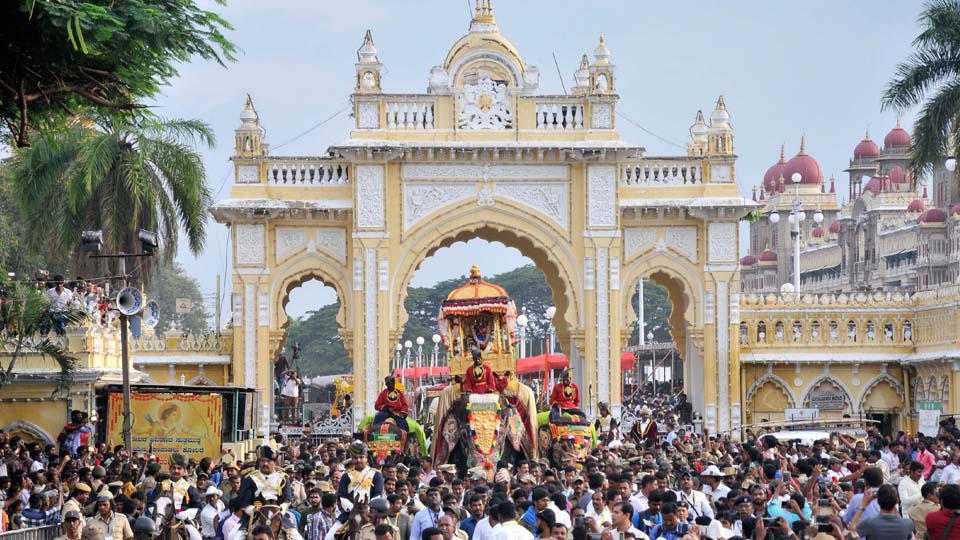 Mysore/Mysuru: Health experts, Task Force members and senior officials have advised the State Government not to relax any rules for the upcoming Dasara festival keeping in view the spike in COVID-19 cases.

“There is every possibility of Mysuru city and district going Kerala way where the Coronavirus cases exploded due to relaxation of rules during Onam festival. In the interest of citizens, do not allow large gathering of people at any venue during Dasara-2020 which will begin from Oct. 17. Medical infrastructure is already crumbling in Mysuru district and it may become impossible for the authorities concerned to handle increased number of COVID patients,” an Officer, who was present at the Task Force Committee meeting in Bengaluru, told  Star of Mysore.

According to him, Mysuru Dasara celebration issue came up for discussion in two meetings. The Medical experts, Task Force members and Officers above the rank of Additional Chief Secretaries strongly opposed the special permission sought to allow 2,000 persons inside Mysore Palace to witness Jumboo Savari procession, 1,500 persons at Palace to witness cultural programmes daily and 250 persons atop Chamundi Hill to be part of inauguration programme.

Allowing this much of people at different venues is like inviting a big trouble. It is better to restrict the total number to less than 100 persons as per new guidelines issued by the State Government for all religious, political or other functions, and not in thousands as mooted by local leaders, he said.

He said they expressed their grave concern over daily increase in Corona positive cases and casualties in Mysuru district that was in green zone for almost two months, thanks to strict vigilance by the district administration. However, things went out of control after the announcement of series of unlocks by the State Government.

As a result, now Mysuru stands second in the State only after Bengaluru in reporting the maximum number of Corona positive cases and deaths. This has become one of the hotspots in the State with the galloping number of COVID-19 cases,  he observed.

Besides, the district is sandwiched between two States — Kerala and Tamil Nadu — and there is free passage of people with no restriction. Since a majority of tourists coming to Mysuru Dasara is from these two States, the Corona explosion cannot be ruled out during Dasara festival.

The Officer said Medical Education Minister Dr. K. Sudhakar was apprised with facts and figures on possible danger in store if immediate steps were not taken to check the spreading of pandemic. Since Chief Minister B.S. Yediyurappa has already decided to hold this year’s Dasara in a simple manner, it will be better to cap the capacity to the maximum 100 persons in the interest of public health.

The Minister was requested to bring this to the notice of the CM before or after the Cabinet meeting this morning to reject the special permission for more audience during Dasara.

“Let the district administration illuminate the whole city but restrict the number to only 100,” the experts said.

It may be mentioned here that District Minister S.T. Somashekar had told SOM that the State Government has requested the Government of India to give special permission to allow 2,000 persons inside Mysore Palace on Vijayadashami Day to witness the procession and 1,500 persons at Palace to witness cultural  programmes daily.

Social, academic, sports, entertainment, cultural, religious, political functions and other congregations have already been permitted with a ceiling of 100 persons, outside Containment Zones only. Now State and UT Governments have been given the flexibility to permit such gatherings beyond the limit of 100 persons, outside Containment Zones, after October 15, which will be subject to certain conditions prescribed in the guidelines. A detailed SOP will be issued to regulate such gatherings and should strictly enforce the same.

READ ALSO  'World will not win battle against COVID without nurses'

Not more than 50 persons will be allowed to attend social, religious and political gathering as well as wedding and other cultural events. Action will be initiated against the organisers or owner of the organisation if more people are found gathering at the event.