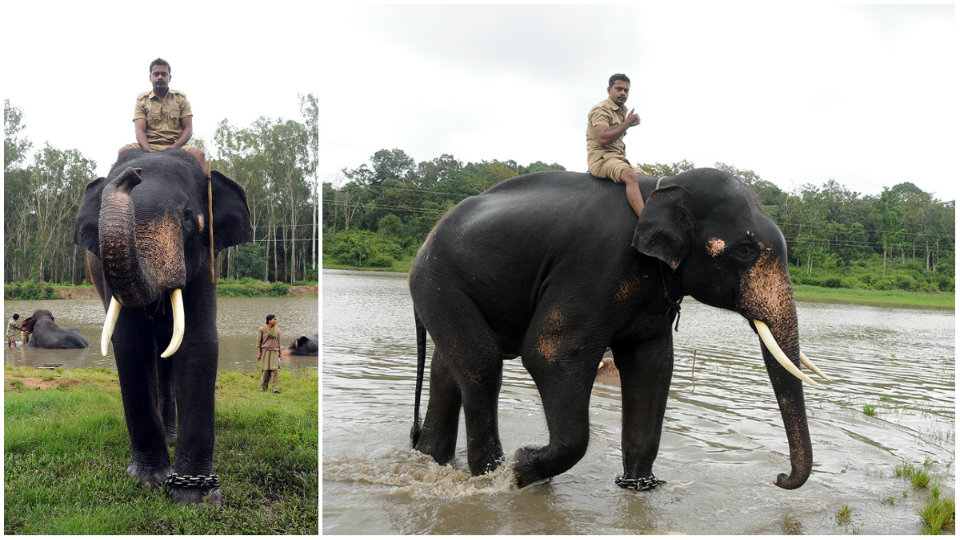 Meet Bheema, who will one day carry Golden Howdah

Among the elephants that will participate in Dasara-2017 is Bheema. According to Forest Department officials, Bheema is a promising Tusker and will one day carry the 750-kg Golden Howdah (Ambari) on the Vijayadashami Day procession. At present, this privilege is being enjoyed by Arjuna.

Bheema has all the physical features of a howdah elephant and its gentle nature has made it a favourite among the Department officials. It is well-built and has the potential of growing further and is strong too, making it an ideal candidate to carry the howdah. Fifty-seven-year-old Arjuna has been the howdah elephant since 2012.

Seventeen-year-old Bheema will be brought from Mathigodu elephant camp in Nagarahole where he is now receiving preliminary Dasara hospitality. In 2002, it got separated from its mother in Nagarahole Tiger Reserve. Forest patrol teams spotted the baby elephant looking out desperately for its mother. When its mother did not return even after two days, the Department officials brought it to the Mathigodu camp.

The elephant was taken care of at the Mathigodu camp and was named Bheema. Initially it was difficult for Bheema to adjust to the camp surroundings. But gradually he took a liking for bottled milk fed by the forest staff. He was very naughty and at the same time he is very gentle and diligently obeys the commands.

According to Deputy Conservator of Forests (Wildlife) Mysuru Division V. Yedukondalu, Bheema has all the characteristics to be a howdah elephant in 15 to 20 years. “Bheema is 17 now and in another 20 years, he will be able to carry the Golden Howdah and we will train him for that,” he said. Going by history, an elephant becomes fit to bear the howdah’s weight only after it crosses 35 years.

Bheema is at present 2.7 metres tall and has shapely tusks that are uniform on both sides. “Like Arjuna, Bheema has a flat back that will help him to carry the howdah easily and at the same time, it will be easier to mount the howdah on its back,” Yedukondalu said.

From this year, Bheema will be brought to Dasara every year for it to familiarise with the regimental training and also acquaint himself with human beings, vehicles and the gunshots fired on Jumboo Savari Day. “We want him to be accustomed to the atmosphere and take on the responsibility of being a howdah elephant,” he said and added that Bheema’s was a gentle nature and most of the times he remains calm.

This Dasara, officials will place Bheema under their close watch and observe his every movement at the time of training and Jumboo Savari rehearsals. Bheema is also trained in capturing and controlling wild elephants like Abhimanyu who has mastered the art. Abhimanyu, nicknamed as “Karnataka’s Rowdy” can control any wild elephant. It uses its tusks and trunk to hit the elephant and one such move silences the other. Abhimanyu has travelled far and wide assisting Forest Department in capturing rogue elephants.

The DCF said like Abhimanyu, Bheema too has the capacity to control wild elephants and will be an asset to the Department.