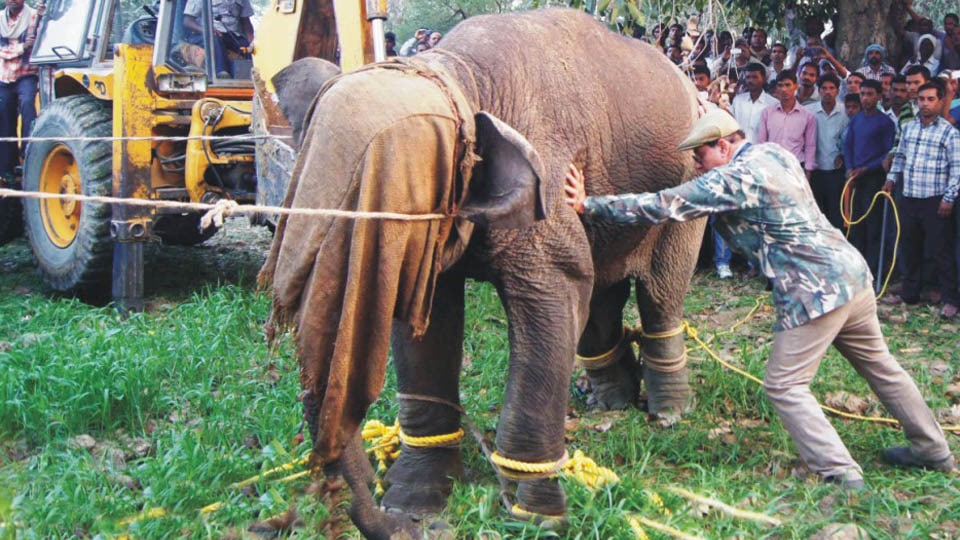 The crux of the man-animal conflict today is that old, weak and handicapped species are pushed out of the forest by the younger and stronger animals. These animals before they could create havoc were eliminated. The village folks were happy, revenge killing was never heard of and we didn’t have elephants straying into private lands like Hassan and Coorg like we are facing today.

Star of Mysore (SOM): The fight between humans and elephants, in other words man-animal conflict is resulting in shocking number of deaths. Planters in Kodagu are facing the heat with their crops being destroyed because of huge elephant menace there. What do you think can be done about this?

Nawab Shafath Ali Khan: The problem is not only in pockets of Karnataka but across the country. Any wild animal requires space. We cannot comprehend compressing them into smaller forest areas. With the number of elephants increasing in the country, the land to animal ratio has gone haywire. National Parks are not being de-weeded and cleared of noxious weeds; to provide enough fodder to the elephants and to restrain them within the parks. Hungry elephants are forced to stray out into agricultural lands for their survival.

Elephant is wise to the fact that nutritional value is found more in sugarcane, bananas, paddy and jackfruit compared to what it gets in barren government-controlled forests. So the Department is putting animals under tremendous pressure. This pressure is changing the metabolism of elephants making them aggressive, attacking people and raiding crops with impunity.

This man-made pressure on elephants and tigers have changed their psychological persona and they are also attacking humans. We have left the problems drift so much that it’s hard to find a win-win situation at this point of time. Anyway my thinking after spending 40 years in the field is that 70 per cent of our wild elephants are outside the forests. This is a very alarming figure. There is no shortage of fund as far as Forest Department is concerned. We are sitting on Rs. 35,000 crore of CAMPA (Compensation Afforestation Fund Management and Planning Authority) Funds. The States can utilise this money and have an elephant-proof trench all around government protected forests. All stray elephants outside this trench will be herded in or translocated. 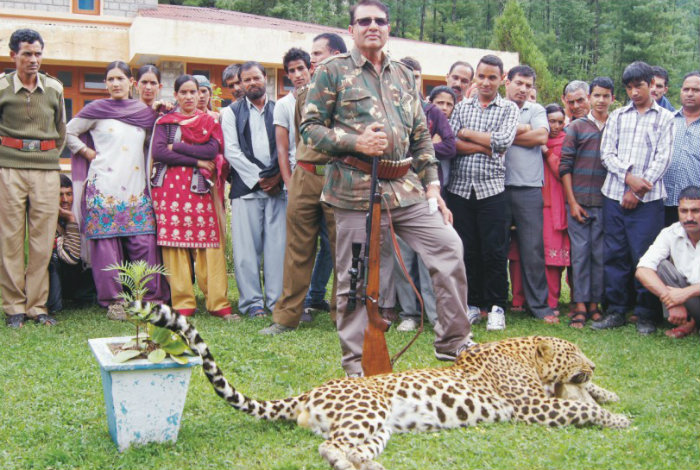 The carcass of the man-eating leopard stretched out on the lawns of Thunag Rest House in Himachal Pradesh.

Wildlife management and human habitations have to be compartmentalised. Solar powered borewells have to be erected every 5-km radius within the National Parks. Clean and sufficient drinking water should be provided to the animals. However, the hard decision that we need to take but from which we have drifted for decades is, how many animals can survive in the relatively small National Parks and buffer areas.

Excess animals sadly will have to be culled not only for their own survival but also to maintain a healthy forest. Overgrazing and over-browsing is casting tremendous pressure on our precious forests.

SOM: There is a story that late Srikantadatta Narasimharaja Wadiyar fell in love with the Land Rover you were driving and bought it. Is this true?

Shafath Ali Khan: Yes, it is true. We were all fond of cars and I had a Land Rover that I had maintained in immaculate condition. The Prince (as Srikantadatta Narasimharaja Wadiyar was called by many who were close to him) fell in love with it and wanted to buy it. But, I was reluctant to sell it. Soon, the Prince and the Princess (Pramoda Devi Wadiyar) came to attend my wedding and the Prince brought a Convertible Red Triumph Sports Car which he gifted to me at the wedding. Now, I had no option but give my Land Rover to him. He enjoyed the Land Rover and I and my wife, newly-married, thoroughly enjoyed the Convertible Sports Car. Prince was very close to me and I was one of the few who had access to the gun rack that was just beside his bedroom. I had the pleasure and honour of cleaning and repairing those beautiful rifles which belonged to the late Highness Jayachamaraja Wadiyar.

SOM: Isn’t there a contradiction when you say nobility indulged in hunting but they also protected forests?

Shafath Ali Khan: It was a paradox that controlled hunting that had a code and a strict set of rules where only males of deer were shot subsequent to the breeding season. Old rogue elephants and dying tigers beyond breeding age were painlessly shot using high-powered rifles in the hands of our expert shooters. Survival of the fittest is the law in the jungle.

The crux of the man-animal conflict today is that old, weak and handicapped species are pushed out of the forest by the younger and stronger animals. These animals before they could create havoc were eliminated. The village folks were happy, revenge killing was never heard of and we didn’t have elephants straying into private lands like Hassan and Coorg like we are facing today.

Wildlife management was much better balanced compared to what it is today. Across the world animal population have reduced or gone haywire wherever government imposed total ban on hunting.