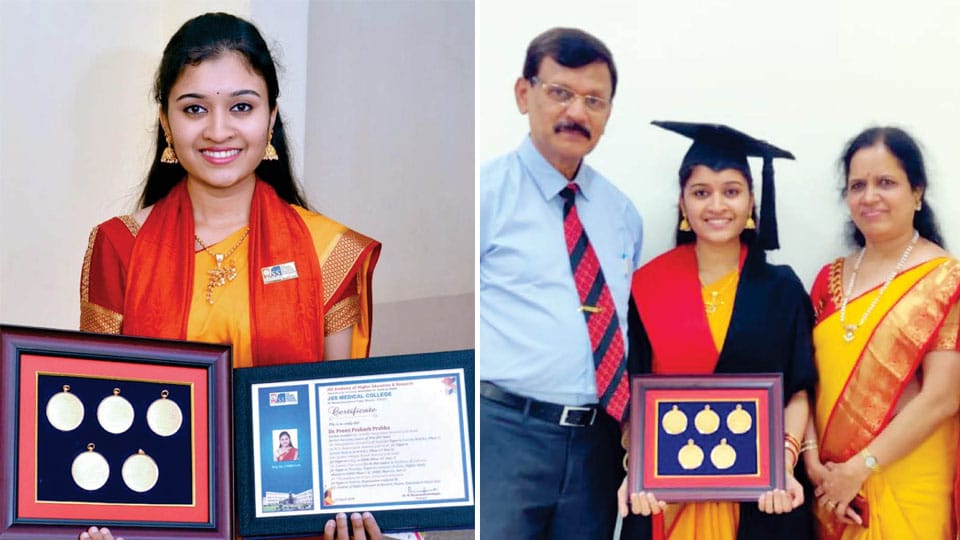 Melodies from a Medico

Dr. Preethi Prakash Prabhu, a 23-year-old MBBS graduate from JSS Medical College, Mysuru, received five gold medals and five cash prizes at the recently held convocation and was adjudged ‘Best Outgoing Student.’ An alumnus of St. Joseph’s Central School, Vijayanagar and Vidyavardhaka Sangha Pre-University College, Mysuru, Preethi secured 18th rank in the State in National Talent Search Examination  (NTSE) in 2009. During her PUC, she cleared the prestigious Kishore Vaignanik Protsahan Yojana (KVPY) Exams both in 11th and 12th grades and was ranked in the top 500 among the country.

Apart from being a medical quiz enthusiast, Preethi is also a Karnatak singer, a participant of reality show ‘Ede Thumbi Haaduvenu’ (2009) and is part of the musical ensemble of ‘Geeth Gaatha Chal: Doctor’s Musical Nite’ held every year in city.

Preethi is the proud daughter of doctor parents — Dr. Roopa Prakash, a Gynaecologist at Kamakshi Hospital and Dr. Prakash Prabhu, a Urologist at Kamakshi Hospital. Her elder sister Dr. Pooja Prakash Prabhu is presently doing her DNB in Nephrology at Manipal Hospital, Bengaluru. The family resides at Kuvempunagar in city. Star of Mysore had a tete-a-tete with this multi-talented doctor, who is also an avid book reader with her favourite authors being Dan Brown, Jeffrey Archer, Devdutt Pattanaik and Anand Neelakantan. Excerpts…—Ed

Star of Mysore (SOM): What made you choose the medical profession?

Preethi: To be honest, during my school days, I actually wanted to pursue Physics, but Mathematics wasn’t one of my strongest subjects and hence I gave up the idea of pursuing Physics too, she said with a smile. Both my parents are doctors. It was actually my mother who inspired me to become a doctor. As a young kid, when I went with my mother to her hospital, I was humbled when patients, after treatment, thanked her with so much reverence and gratitude. That is when I thought how noble the profession of doctor was.  Hence, I chose to become one.

SOM: A junior in Bharatanatyam, Karnatak music and a yoga enthusiast too. How do you juggle so many talents?

Preethi: I was always encouraged by my parents to try my luck at different arts. I was introduced to Karnatak music at the age of three. I trained under B.K. Chandrika, a resident of Kuvempunagar and later on many others and have cleared by Junior Grade Exam in Karnatak. I learnt Bharatanatyam under Dr. Vasundhara Doraswamy.  With time, I concentrated more on Karnatak music and have performed at many platforms including Dasara – 2009 and have been performing at ‘Geeth Gaatha Chal: A Doctor’s Musical Nite’, held every year in Mysuru city. I also do Yoga to have a clear mind and a healthy body.

SOM: Were you into sports during your school days?

Preethi: Tried my luck in sports too, but didn’t attain much success, that’s probably because I am not an athletic person.

Preethi: My mother, Dr. Roopa Prakash Prabhu, is my biggest inspiration. The amount of hard work she puts in each day while at home and at hospital, her balance between personal and professional life is what motivated me to become a doctor. I look up to her in every way and also my father, Dr. Prakash Prabhu. Both my parents and also my elder sister, Dr. Pooja Prakash Prabhu are my role-models. When in school, I used to see how studious and dedicated my sister was towards her studies.

Sometimes, I even played with some bones my sister had at home for her studies, unaware that one day I too would choose the same profession. We are a family of doctors, you see!

SOM: Your message to School and PU students who want to pursue medicine?

Preethi: Do not choose to become a doctor if you are not ready for hard work, complete dedication and have a conscious moral responsibility towards the society. This is not a ‘lucrative’ job and you have to be mentally prepared in your pursuit of becoming a good doctor, ready to serve the needy. Many youngsters get carried away with a notion that the ‘doctor’ tag helps one get lots of money and fame. It isn’t the case. People revere doctors and look up to them as Gods, remember the shloka “Vaidyo Narayana Hari?”

Here, I want to mention Dr. Vani, my Biology Teacher at Vidyavardhaka PU College, who taught us Biology in such a logical way, that I, who till then wasn’t so keen about pursuing Biology as a subject, chose to become a MBBS doctor. Through her teaching, I learnt how delicate the balance between the flora and fauna is.

SOM: As a Karnatak singer, you were a participant of ‘Ede Thumbi Haaduvenu’. Share with us your experience?

Preethi: I took part in ‘Ede Thumbi Haaduvenu’ a singing reality show of ETV Kannada, while I was studying in VI standard. It was a great exposure to perform at such a big platform and I felt happy meeting the legend, Dr. S.P. Balasubramaniam. Although, I was eliminated after the third round, the number of highly talented artistes I met through this show are countless. I am still in touch with most of them.

SOM: A prize-winner in Medical Quiz events too. Do you love quizzes?

Preethi: I have always been a fan of trivia and love attending medical quiz events. I read a lot of books, medical and non-medical in preparation for such events.

SOM: Any particular celebrity-fan moment you remember or want to share? Favourite singer and song?

Preethi: My favourite singers are Shreya Ghoshal and Arijit Singh and my favourite songs are ‘Ghar more Pardesiya’ from ‘Kalank’ and ‘Mere Dholna Sun’ from ‘Bhool Bhulaiyya.’ My most memorable celebrity-fan moment was when I got to meet Devdutt Pattanaik at the 40th anniversary celebrations of Star of Mysore and get a book of his signed at the event. His take on Indian mythology leaves me in awe every time I read his book.

SOM: Do you intend to serve at rural areas? Why is it important?

Preethi: During our internship while pursuing MBBS degree, we had rural postings where we served at rural places from dawn to dusk. Direct interactions with the rural folk helped us understand their issues better and thus treat them better too. The facilities at the Primary Health Centres (PHCs) at these villages are actually very good while treating for basic complaints like cold, cough and fever. But those requiring surgeries and other complicated medical issues have to come to city hospitals for better care.

SOM: Something about your College and the amount of hard work it takes to become a doctor?

Preethi: My College, JSS Medical College, has the best library. The infrastructure and laboratory facilities here are state-of-the-art and the Professors are very friendly and approachable. The classes are very structured and the standard of examination paper is very very tough.

SOM: All nine gold medallists are girls. A proud moment? Your take on women empowerment?

Preethi: In our country, there has always been an unspoken difference about man and woman. But now, the times are changing, slowly but effectively. All the nine gold medallists being girl students is an example of ‘What Women Can Do’ and how society cannot hold them back. Women today, are making their mark in all fields, right from being the perfect home-maker to scaling greater heights in their respective fields.

SOM: Are you into social media? If so is it a boon or bane?

Preethi: I am not much into social media, although social media has played a great role in bringing about change in perspectives amongst the people in general. Now, everyone has a medium to express his or her views on social issues and other relevant topics through these social media platforms. Nothing goes unnoticed in today’s digital world.

Preethi: Right now, after MBBS, I am taking a year’s break to prepare for PG Entrance Exams. I still haven’t chosen my subject of specialisation but am more inclined towards General Medicine than Surgery.