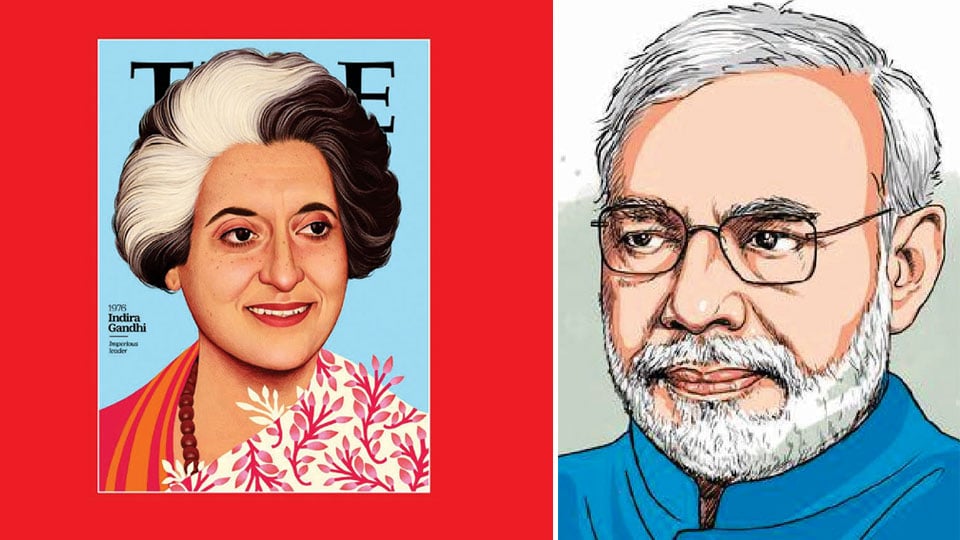 Remembering ‘Imperious Leader’ Indira Gandhi in the days of CAA !

Ever since Prime Minister Narendra Modi and Home Minister Amit Shah decided that India as a country, after 73 years of Independence, should for once wake up from its euphoria of freedom and slumber of complacency, much had happened to our country’s destiny.

If 1947 was a red letter day for India, so also was 2019. When we got Independence, we thought we would redeem our past which was mired in disgrace, because of over 1,000 years of Muslim and British rule. But, did we really redeem our past, if not abundantly, at least in good measure (to borrow Nehru’s words)? I was born before 1947 and always felt that even after Independence it has been a continuation of the administration that was in vogue during British rule. Earlier to that, Sultans and the Mughals ruled, appeasing Muslim Nawabs and family members with Zamindari, territories and plum offices. Only difference is that Zamindari is abolished, Royal and British titles are abjured and all the top officials now are Indians.

Even here, Nehru managed to have his friend, an englishman, Lord Louis Mountbatten, who was the Governor General of United India in 1947, to continue as divided India’s first Governor General ! Later, good sense prevailed to have Chakravarti Rajagopalachari, an Indian, as Governor General for a period till that office, on abolition, was adorned by Dr. Rajendra Prasad as the President of India.

It is sad that India has been compromising and forgiving with its foreign rulers for over 1,000 years and that habit still seems to continue. Let it be.

Unfortunately, the Hindu majority community, after India was divided with bloodshed on the basis of religion, never realised their aspiration of redeeming its Hindu past and correcting many historical wrongs inflicted on it by foreign rule. Even the Janata Party after 1975 Emergency rule and during six years of BJP’s rule under Vajpayee could not think of redeeming our country’s ancient past in its multiple dimensions of spiritual and cultural heritage. Even demoralising visible wounds of foreign rule are allowed to remain to the present! There is much to learn from Spain and some European countries.

Many thought the religious majority would realise their aspirations when BJP came to power again in 2014 with Narendra Modi as Prime                                                Minister. Nothing much happened beyond creating a visible perception of India being a Hindu majority country because of Prime Minister Modi’s personal attire and utterances about the glory of this ancient country’s culture and civilisations.

It is only in BJP’s second term that began in 2019 with absolute majority in the Parliament and with Amit Shah as Home Minister, the country was able to correct a number of historical wrongs committed by the earlier foreign rulers. Some steps were taken to erase the remnants of disgrace that remained in the form of destroyed ancient temples of Hindus and in the form of Muslim and English names given to our ancient cities and important roads. A road in Delhi named Aurangzeb was changed only recently after 68 years of Independence. Even here this BJP Government has to work under the constraints of an amended Constitution, amended during the rule of Congress Government.

Despite these legal inhibitions, the Modi-Shah unbeatable combination succeeded in bringing a number of laws within the framework of our Constitution  — like for example the law against Triple Talaq, the abolition of the most discriminatory and non-secular Article 370 relating to Jammu & Kashmir, most important Citizenship Amendment Act (CAA), so on and so forth. Before BJP came to power under Modi, for me, it was almost like a foreign rule by proxy. It was clearly a case of vote bank politics which Vajpayee too imitated during his time but without success.

Why do I reminisce the past in this manner? It is because my mind was ignited on seeing Mrs. Indira Gandhi’s painted portrait on the front cover of America’s weekly magazine TIME dated 16th March 2020. It is a special issue dedicated to women. Apparently, because of the Women’s Day that fell on Mar. 8, I think. The magazine carries pen sketches of many famous and distinguished women leaders of the world and Indira Gandhi appears in it with a beautiful photograph as Prime Minister in 1976. The title that writer has more appropriately given reads, “Indira Gandhi – Imperious leader”. The very opening sentence is eloquent about the personality of Indira Gandhi. It says “In 1976, the ‘Empress of India’ had become India’s great authoritarian”. The article written by Sagarika Ghose says at one point, “She quickly ripped apart her father’s democracy and amended India’s Constitution to give herself  enormous powers. She jailed political opponents, muzzled the press and extinguished fundamental rights across the country.”

Incidentally, today the same Congress party along with the support of some Muslim minority is opposing the CAA, enacted under the same Constitution.

No wonder, despite the CAA being passed by the Parliament as per the Constitution, the Congress party launched a protest which later led to a riot killing 57  people, injuring many and causing loss of crore worth of properties belonging to the country and the innocent people of Delhi. No doubt a large number of innocent Muslims who participated in this Shaheen Bagh protest, that lasted over two months, were misled by the opposition to achieve its political agenda. It was neither for the good of Indian Muslim brethren nor for the good of the Nation.

Only when all the political parties respect the Constitution by accepting the law passed under this Constitution, whether in victory or in defeat, will there be peace in our country. And, without peace, there can be no progress. Now is the time for the Opposition to accept this Constitution or take steps to amend or to review it to suit their political agenda, forgetting the county’s interest, when they come to power.

But, this kind of protest may continue each time the Parliament passes a law by whoever is in Opposition. So where is the end to this Shaheen Bagh kind of unconstitutional protest? You are warned.