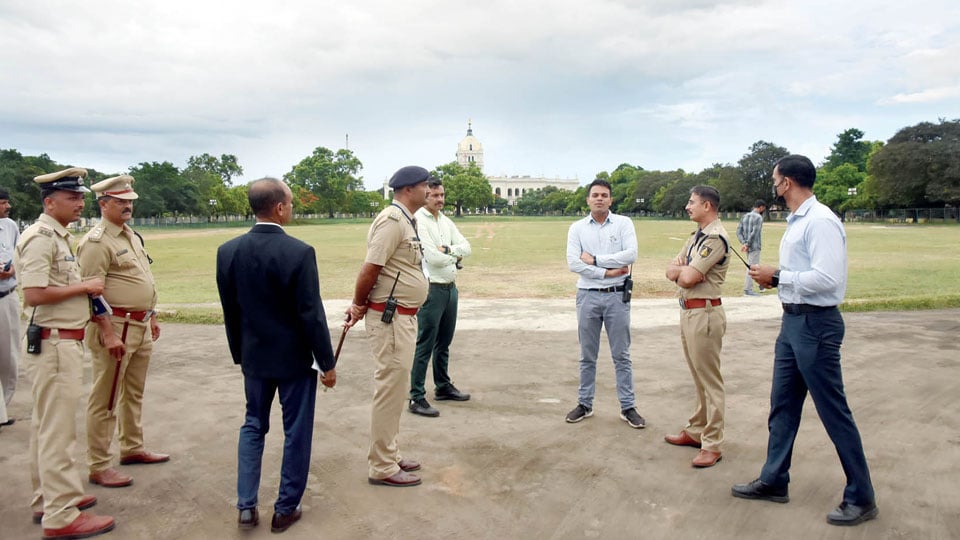 Mysore/Mysuru: The MI-17 helicopter owned by Indian Air Force (IAF) carrying Prime Minister Narendra Modi will land at the helipad set up at Oval Grounds here today at about 4.50 pm after the day-long packed schedule in Bengaluru.

The timings may vary as per his schedule in Bengaluru. As per the PM’s tweet this morning ahead of his two-day Karnataka visit, he will be in Mysuru at around 5.30 pm. Modi tweeted both in Kannada and English, outlining his State visit.

Sources said that only the PM’s chopper will directly land at Oval Grounds while the helicopters of Chief Minister Basavaraj Bommai, Governor Thaawarchand Gehlot and a couple of Union Ministers will land at Mysore Airport and the guests will travel by road to join PM Modi at Maharaja’s College Grounds.

Meanwhile, Special Protection Group (SPG), National Security Guards (NSG) and the State Police have also kept Mysore Airport — where the PM was earlier scheduled to land — and Lalitha Mahal Helipad ready for contingency landing. As per the protocol, if the PM is expected to take a chopper ride to reach a venue, at least one alternative road route is kept ready.

READ ALSO  TIME to know the world’s most influential people

As part of the cavalcade movement rehearsal, route lining or deployment on the alternative route was also done yesterday. The exercise ensures that responsibilities are fixed on the State officials for the sanitisation of routes that the PM would take. However, as per the SPG directives, there will be no rehearsals today.

Alternative routes are often decided by the State and communicated to the SPG and when both agencies are satisfied the PM’s travel is undertaken. Intelligence officials are involved to alert in case of any sabotage attempt.

Apart from the 3,000-strong Police force in Mysuru, over 1,000 additional forces including 20 Senior Officers and 40 Inspectors have been summoned to Mysuru from Mandya, Kodagu, Hassan, Chamarajanagar, Shivamogga and Tumakuru.

This apart, personnel from Quick Response Team, Bomb Squad, Anti-Sabotage Squad and Anti Riots Squad have been pressed into service. The Police have advised citizens to opt for alternate routes rather than depending on main avenues to curtail waiting time at junctions, which would be wrapped with bandobast.

The Radisson Blu Plaza Hotel where Prime Minister Modi will retire for the day today has been taken over by the SPG and NSG commandos.

Entry is restricted even inside the hotel compound and the rooms too have been taken over by the security forces. A security blanket has been spread around with gun-toting commandos guarding every inch of the space.