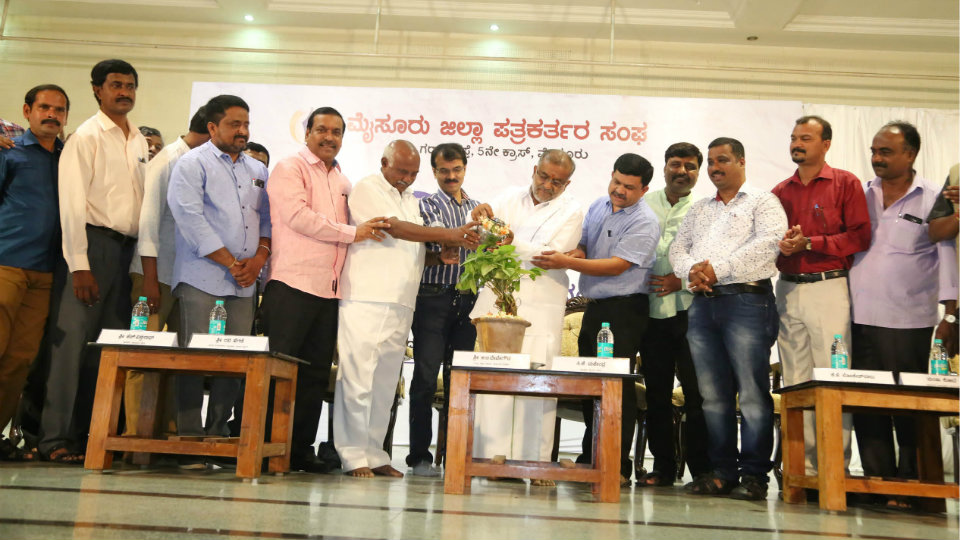 Mysuru: Underlining the role of Media in correcting the wrongs of the society, Higher Education Minister G.T. Devegowda has said that he will make honest efforts to ensure that journalists are covered by life insurance. He was speaking after presenting annual awards for journalists and photographers at an event organised by Mysuru District Journalists Association (MDJA) at Rajendra Kalamandira on Ramanuja Road yesterday.

Referring to an appeal made by former President of Karnataka Pradesh Hotel & Restaurants Association President M. Rajendra that journalists be covered by life insurance as they are often exposed to risk, Devegowda said that he would discuss the issue with the Chief Minister.

Responding to an appeal by MDJA that ‘Patrika Bhavans’ be built at all taluk headquarters, the Minister said that he would seriously look into the demand.

Pointing out that the Fourth Estate has the power to correct the flaws in the Executive, Judiciary and the Legislature, he said that those working in the Media have enormous responsibility of correcting the society, whenever it went wrong.

Noting that Chief Minister H.D. Kumaraswamy who was to participate as the Chief Guest could not attend the function as his (HDK) arrival in the city was delayed for a couple of hours due to incessant rains in Kodagu, G.T. Devegowda wished the scribes on Newspaper Day.

MLA A.H. Vishwanath said that the media should try to tell the true status of the fiscal situation of the State.

Highlighting the provisions made in the budget by the coalition government for various sectors, Vishwanath said that it was important for the media to present a true picture of the fiscal situation. Senior journalist Ravi Hegde in his keynote address, said that news channels should look at alternative ways for increasing their TRP ratings.

Expressing concern that the media is getting more and more commercialised and thus losing credibility, he bemoaned that the media was only after TRP ratings, while ignoring the real issues that are haunting the society.

Maintaining that getting advertisements was behind the craze for TRP ratings, he stressed on the need for the media to come out of such a mindset and look at alternative ways.

He also emphasised on the need for the growth of small newspapers, as they play a crucial role in reporting local issues in detail.