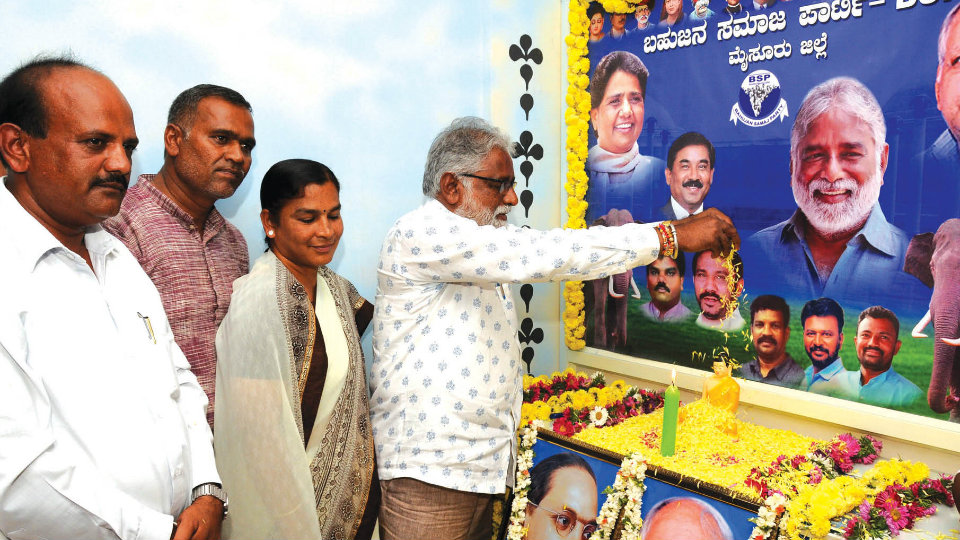 Mysuru: Primary and Secondary Education Minister N. Mahesh of Bahujan Samaj Party (BSP) that has an alliance with JD(S) in Karnataka has asked his party workers to get ready for the 2019 Lok Sabha elections.

Mahesh was speaking to party workers after inaugurating the BSP District office on Vinoba Road in city yesterday. Chamarajanagar and Mysuru are the strong bases of the party and efforts must be made to win the constituencies, he said.

While BSP had aligned with JD(S) for the Vidhana Sabha elections, the party (BSP) fought independently in the Local Bodies elections and its performance was impressive. “Party workers must continue the same zeal and enthusiasm and work towards strengthening the party,” he said.

On his statement where he called Congress party dangerous and like Congress Grass (Parthenium) and it must be removed, the Minister told the party workers not to react to the statements by others. It may be recalled that Mahesh had recently stated at an event, “We are working towards cutting the Congress plant, which is a Parthenium plant, growing in large quantities.”

Mahesh’s statement was not taken lightly by Chamarajanagar District Minister C. Puttarangashetty who said, “Who is he to remove Congress? If Mahesh has given a statement on evicting Congress, he himself would be out. He won the election by luck. Instead of giving negative comments on Congress, he should involve in the development works in his constituency.”

Pointing out the number game politics, Shetty had said, “Congress MLAs are 80 in number and Janata Dal (S) has only 37. If we wish, Mahesh will not last long in politics. None could do anything to Congress so far. What can Mahesh do.”

Reacting to Puttarangashetty’s outbursts, Minister Mahesh said that he did not have Congress party in mind when he referred to Parthenium. “This issue is being blown out of proportion by Puttarangashetty who has addressed me in singular,” he said.

“I was actually referring to Parthenium at a cleaning programme at Kollegal and the weed is called the Congress Grass. But even for a moment, I did not compare Congress with Parthenium,” he said.

“Only Chief Minister H.D. Kumaraswamy (HDK) has the right and prerogative to remove me as a Minister. BSP has an alliance with JD(S) and I became the Minister because of people of Kollegal, CM Kumaraswamy and BSP Supremo Mayavati and not because of anyone. I appeal to the party workers to leave the issue here itself,” he said.