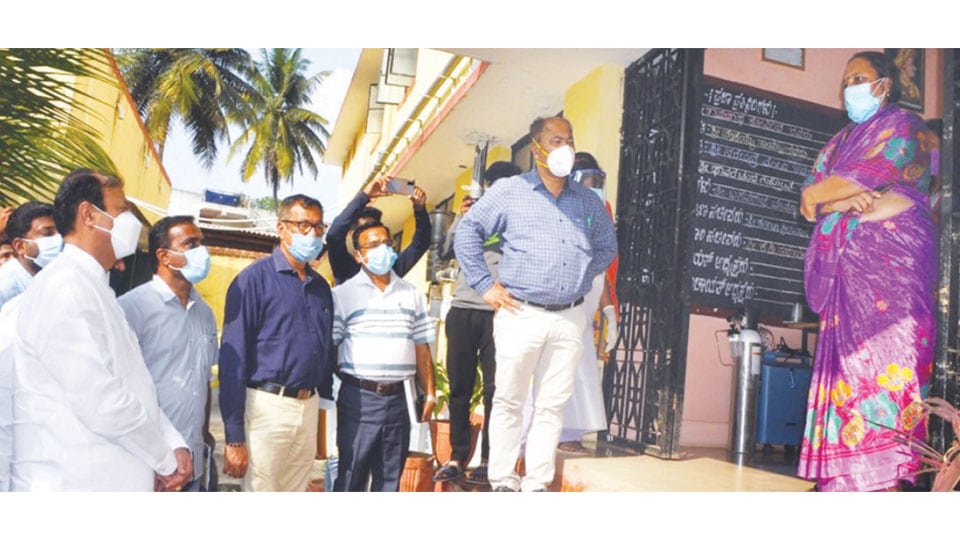 Later speaking to presspersons, Narayanagowda said that the District Administration is taking all measures for preventing the spread of the pandemic. Noting that currently the virus infected are undergoing treatment at designated Hospitals and CCC, he said that most of the fresh cases are devotees who returned from Om Shakti.

Maintaining that those entering the district from other States are subjected to COVID test, the Minister said that those who test positive will be treated for 7 days at the CCC, while others will be allowed to go home.

Commenting on Mekedatu padayatra, he said that the Congress is playing politics over the project by taking out padayatra during COVID crisis.

He contended that the Mekedatu project was the brainchild of the previous B.S. Yediyurappa-led BJP Government. The project could not be executed straightaway as the matter was in the Supreme Court. He said the Congress padayatra led by KPCC President D.K. Shivakumar is only a political gimmick.

Later, the Minister visited the COVID Care Centre at Srirangapatna and took the officials to task for improper and injudicious use of Government facilities. He directed the DHO to take action against lethargic officials.

Narayanagowda telephoned Mandya Deputy Commissioner Aswathi and apprised her of the shortcomings in Srirangapatna CCC. He asked her to immediately appoint a Nodal Officer for tackling COVID in the taluk  and to take all other necessary measures for checking the spread of the virus.

Replying to allegations that the District Minister took a long time to visit the Hospital despite surge in cases, Narayangowda said that Mandya was the first among the districts to take all precautionary measures.

A day after he visited COVID Care Centres at Pandavapura and Srirangapatna, Mandya District-in-Charge Minister K.C.Narayanagowda, who is on an inspection spree of Hospitals in the district on the preparedness of Hospitals for tackling COVID, visited CCCs across K.R. Pet  taluk on Monday.

Narayanagowda, who visited CCCs at  Kittur Rani Chennamma School at Valageremenasa, BCM Hostel at Hosaholalu and the Taluk Hospital at K.R.Pet town, enquired about the health of COVID patients. He also enquired about food and house-keeping facilities.

Speaking to presspersons, Narayangowda said that Om Shakti devotees were driving COVID cases all across Mandya district. Asking the officials to take all precautionary measures to check further spread of virus, he said that all CCCs in the district were equipped to handle any contingencies.