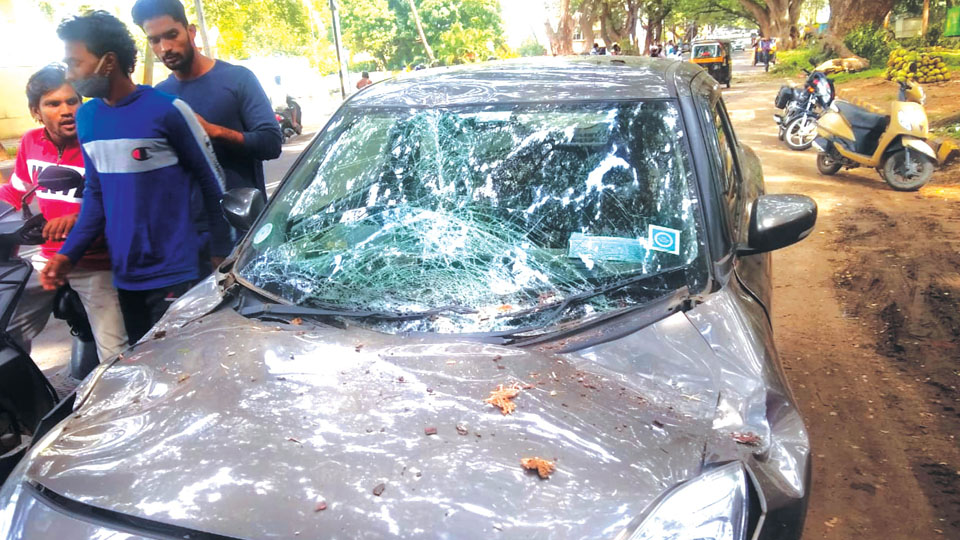 Mysore/Mysuru: Two persons travelling in a car on Valmiki Road, escaped miraculously when a huge branch of a tree fell on the bonnet of the car this morning.

Tilakraj of Vijayanagar, who was behind the wheels of the Maruti Swift car, was on his way to drop his friend Roopak to Bogadi when the incident took place.

After taking a turn near Sri Ramakrishna Ashram to Valmiki Road, the duo was proceeding towards the traffic signal light on Valmiki Road-Hunsur Road Junction when the huge branch of a tree snapped and fell on the front portion of the car (KA-41-MB-7180) in front of Leela Channaiah Kalyana Mantap damaging the front wind shield and the bonnet of the car badly.

According to the car owner, the damage caused is about Rs. 3 lakh. Had the branch fallen on the car’s top, it would have resulted in fatalities, public said.

Soon, members of the public, who gathered at the spot, cleared the branch from the road and made way for smooth flow of traffic.

Tilakraj and Roopak were on their way to the jurisdictional Police Station to lodged a complaint when we went to the Press.