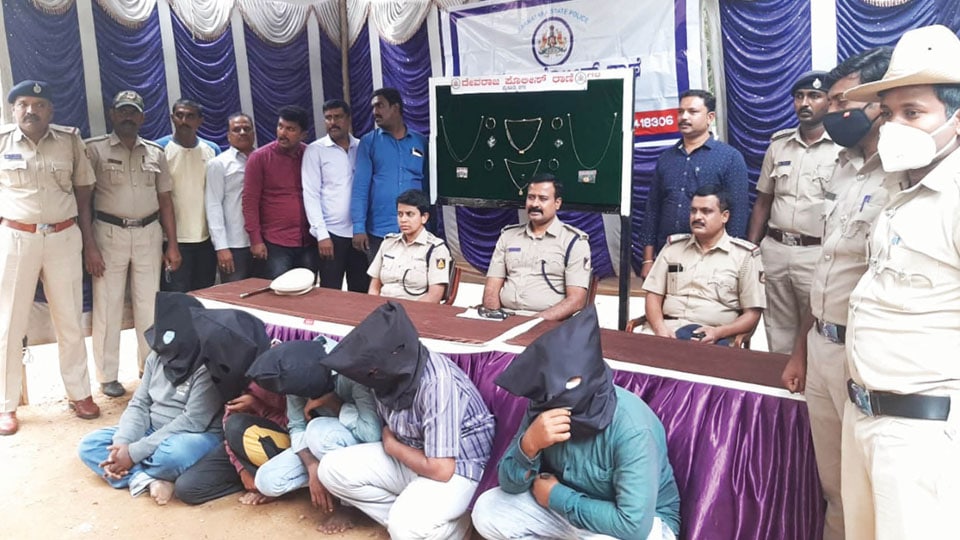 Mysore/Mysuru: Devaraja Police have arrested five persons on charges of looting cash and jewellery from the house of an elderly couple at Vivekanandanagar in the early hours of Aug. 29 and have recovered gold ornaments worth Rs. 12 lakh from them.

The arrested are 27-year-old Zabiulla Shariff of Ambedkar Nagar near Sathagalli Bus Depot, 24-year-old Ibrahim Ahmed of Udayagiri, 22-year-old Khasif of Ghousianagar, 42-year-old Gavigowda, a native of Hassan and a  resident of Giriyabovipalya and 52-year-old B.S. Girish, a native of Bilikere and a resident of Vivekanandanagar.

Acting on a tip off that five persons were trying to sell a gold chain on Vinoba Road, Devaraja Police, on Sept. 17, took the five persons into custody and interrogated them during which they spilled the beans.

During interrogation, the Police came to know that accused Girish, who was the neighbour of the elderly couple (victims) identified as Veerabhadraiah and his wife Rangamma, had informed others about the elderly couple, who were staying alone in the house and asked them to loot the house.

Accordingly, on Aug. 29 at about 6.15 am, Zabiulla, Khasif and Ibrahim, who came in an autorickshaw to Vivekananda Circle, parked the auto at a distance from the Circle. Zabiulla and Ibrahim went near the house of Veerabhadraiah and entered the compound. Veerabhadraiah’s wife, who woke up on hearing the jumping sound, opened the rear door of the house and the two barged into the house, caught hold of Rangamma and Veerabhadraiah, gagged them, tied them to a chair and threatened them with a dagger.

They later removed the jewels worn by Rangamma and took away gold jewellery and cash kept in the almirah before fleeing from the spot. A case was registered at Kuvempunagar Police Station.

Interrogation of the accused also revealed that accused Zabiulla, who wanted to live a luxurious life, had bought a TV, fridge, cot, sofa and washing machine from the money they got from selling the jewels. The Police have recovered the items from his house.

Gavigowda, on Oct. 26, 2015, was involved in looting retired Judge C. Shivappa and his wife Vijayalakshmi of Rs. 1.4 lakh and 177 grams gold ornaments after tying up the couple.

He was named as Accused No. 4 in the case, informed DCP Dr. Prakash Gowda.