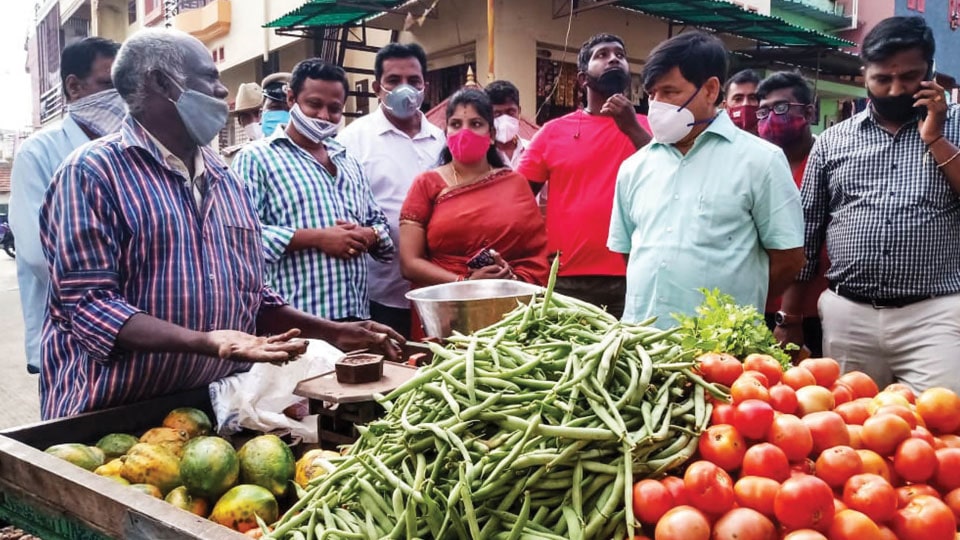 Mysore/Mysuru: KR MLA S.A. Ramdas on Monday launched ‘Yogakshema Yatra,’ a week-long initiative aimed at addressing the problems of the people and preventing the spread of COVID-19 in his Assembly segment. The MLA launched the initiative by offering prayers at Ganapati Temple in Alanahalli. Later, Ramdas took out a bike rally covering several areas in MCC Ward No. 53 and held a public grievances meeting at CITB Choultry in Siddarthanagar.

During the meeting, he directed the Tahsildar to take measures for providing financial assistance to a differently abled girl and also to admit four school dropouts to schools under the National Education Policy.

At the end of the meeting, Ramdas administered a oath to the gathering on following COVID-19 safety measures such as wearing of face mask, maintenance of physical distancing in public, No to Betting, Narcotic Drugs and such other evils.

Thereafter, Ramdas went to J.C. Nagar (Ward No. 52), where he offered prayers at Chamundeshwari Temple and went around the locality, when some members of the public complained about lack of civic amenities. Ramdas directed the officials to take necessary measures for addressing the issues.

From here he went to Prashanth Park on Lalitha Mahal Helipad Road, where he instructed officials to take measures for development of the park and to designate appropriate place for street vendors doing business near Kalyana Mandira behind Karaga Temple.

He then went around MCC Ward 51 and inspected the ongoing Under-Ground Drainage (UGD) works on Ramanuja Road. Following complaints that a house is being unauthorisedly being built on the drainage on 13th Cross, Ramdas asked the officials to look into the complaints.

The MLA launched interlocking tiles work on the footpath of Uttaradi Mutt Road and planting of saplings on Second Cross of Shankar Mutt Road, following which he took part in a public grievances meeting.

Later, Ramdas, who spotted an aged man selling footwear under a tree near CADA office, assured him of sanctioning a shop for carrying out his business.

Explaining the objective of the Yatra, he said that the week-long programme also features facilitating eligible people to get pension under various social security schemes and getting BPL and Ayushman Bharat health cards on the spot to beneficiaries.

Pointing out that he is going to address public meetings at 19 places across KR Assembly segment, he said that the valedictory of the week-long yatra will take place at Tonachikoppal on Oct. 11.

MLA S.A. Ramdas continued his week-long ‘Yogakshema Yatra’ programme by taking out a ‘padayatra’ in several Wards of his assembly segment on the second day yesterday.

Ramdas set out on his ‘padayatra’ by performing puja at Prasanna Vishweshwaraswamy Temple on Geetha Road coming under Ward No. 49. Later, he heard grievances from the public and directed officials to address the issues raised by them.

Then he heard grievances from the residents on Kollapuradamma Temple Road and directed the officials to immediately prepare an estimate of the works related to UGD and road asphalting and begin tender process. On the occasion, ‘Seemanta’ was performed to pregnant women under Pradhan Mantri Matru Vandana Yojana at Hoysala Karnataka Sangha premises.

The MLA also assured of all possible Government help to Venkatesh, a resident of Hosabandikeri, who lost his hand in an electric mishap.

Thereafter, Ramdas went around Bestarageri (Ward No. 50), when he directed the officials to construct a drainage along Siddappaji Temple Road.

Visiting the Sunnadakeri market, Ramdas instructed the officials to address the problems faced by vendors. He later held a public grievances meeting at Madeshwara Temple premises, where he symbolically distributed ID cards issued by the Labour Department to five construction workers. He also assured a distressed grand old lady of a house and a job for her daughter-in-law. The Madeshwara Temple Committee, in association with Nayakara Sangha, felicitated Ramdas on the occasion.

Thereafter, the MLA visited the areas around Nanjumalige and heard grievances from the public.

During the ‘padayatra,’ Ramdas created awareness among the vendors on the Prime Minister’s Street Vendor Atma Nirbhar scheme, during which four street vendors applied for getting the benefits of the scheme.