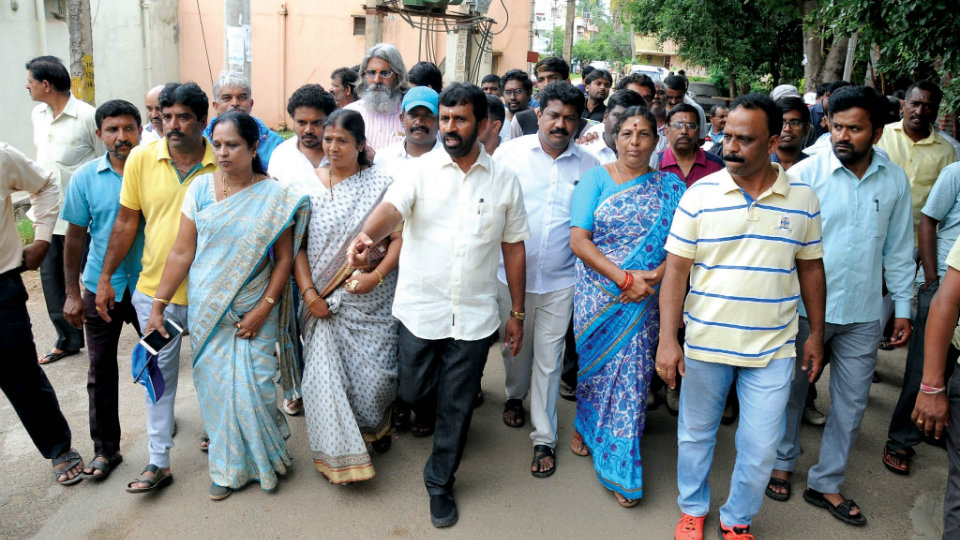 Mysuru:  Chamaraja MLA L. Nagendra undertook a padayatra in Gangotri Layout coming under MCC Ward No. 21 in city yesterday and heard grievances from the public.

During the Padayatra, many residents complained of lack of development in the locality and also haphazard dumping of unsegregated wastes in the locality.

Some residents complained of drainage clogging and encroachment of conservancy land at a few places, that has hindered the flow of storm and drainage water.

He also instructed the officials to develop five parks in the locality by installing children play equipments and gym facilities.

Even as L. Nagendra was taking out padayatra in the ward, Mayor Bhagyavathi who accompanied the MLA, was taken to task by some irate residents for failing to discharge here duties properly as the area Corporators.

Later, MLA Nagendra said that he has come to know the problems in the locality and the officials have noted down them.

Stating that he had received complaints on unauthorised structures and encroachment of Government land, the MLA said that he had no objections for taking action against any illegal structures and added the officials were free to take appropriate action in this regard.