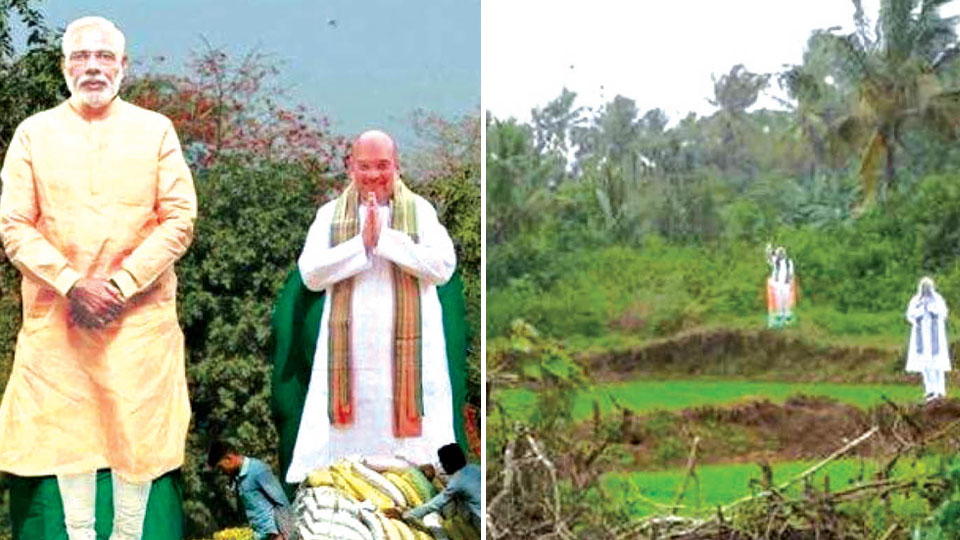 Chikkamagalur:  Two months after the Karnataka Assembly elections, Chikkamagalur farmers have found an innovative way of using politicians’ cardboard cut-outs that were used during campaigns. Cut-outs of Prime Minister Narendra Modi, Amit Shah and other leaders that were used extensively during the election campaigns are now being used to chase away crows in Lakkavalli Hobli of the Tarikere taluk.

This year, the monsoon has brought in a generous amount of rainfall following which the farmers have completed sowing seeds. However, the President of the village T.N. Shivakiran denied any knowledge of cut-outs being used as scarecrows and said that “he has not come across any of them.”

Meanwhile, the buntings and wooden sticks used for the cut-outs have been used for different other purposes. Chikkamagalur, the coffee haven of India, was a prestige battle for the Congress, but like the last few years, BJP won in all five Constituencies of the district.

Both Modi and Shah had addressed massive rallies in the district which was attended by a huge crowd. The local leaders too carried out aggressive booth level campaigns by using the cut-outs of the leaders including Modi, Shah and party State President B.S. Yeddyurappa.

“It is not restricted to any particular party. Party leaders had kept the cut-outs to seek votes in the villages and semi urban areas. Now the farmers are using the same in their fields,” said Rajesh Matapathi, a resident of Tarikere and agro-equipment supplier. “Many were using the buntings, wooden sticks used for the cut-outs for various purposes,” he added.