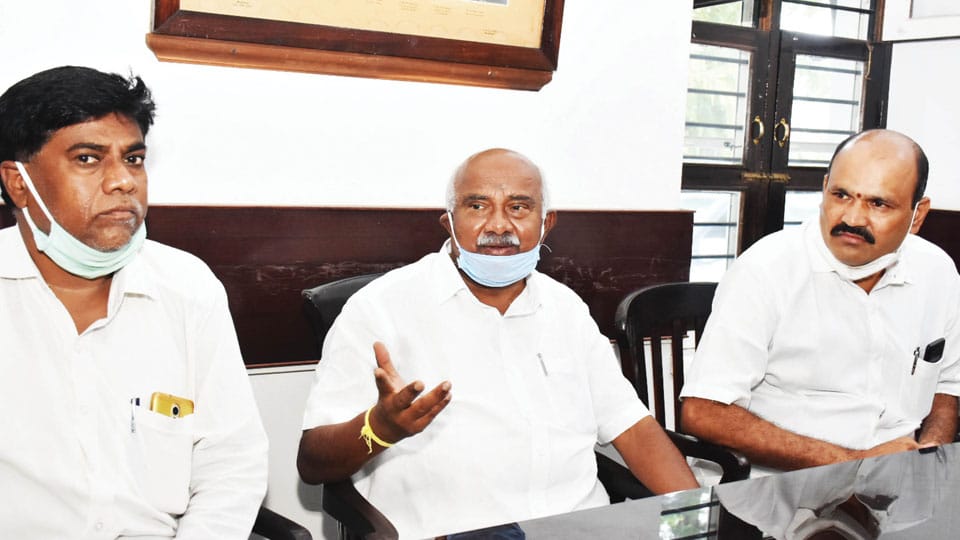 Mysore/Mysuru: Senior BJP leader and MLC A.H. Vishwanath said that in the wake of COVID-19, it would be more meaningful if this year’s Dasara is inaugurated by Doctors, ASHA Workers and Pourakarmikas, who are at the frontline in the battle against the deadly pandemic.

Speaking to press persons at Jaladarshini Guest House here yesterday, Vishwanath said that there are many instances where Dasara was celebrated inside the Palace.

Noting that Dasara was celebrated without Government funds in 2003, he opined that in the wake of COVID-19 regulations and the precautionary measures to be taken such as physical distancing, wearing of face mask, thermal screening etc., Dasara cannot be celebrated in a grand manner this year. However, Dasara should be celebrated in keeping with age-old traditions and customs and he would write to the Chief Minister in this regard, he said.

Pointing out that writers, musicians, artists, scientists, politicians, Chief Ministers, Ministers and such other dignitaries had inaugurated Dasara in previous years, Vishwanath said that this year, the 10-day festival should be inaugurated by Doctors, Pourakarmikas and ASHA Workers, who are serving as Corona Warriors risking their own health and lives to root out the pandemic.

Pointing out the inauguration of Dasara by Corona Warriors would send out a message to the entire country, Vishwanath said that he would suggest this idea to the CM during the High-Power Dasara Committee meeting to be held at Bengaluru on Sept. 8.

Reacting to former CM H.D. Kumaraswamy’s allegations that drug money was used for toppling JD(S)-Congress Coalition Government, which he (HDK) headed, Vishwanath wondered why the former CM was silent all these days.

Maintaining that the Coalition Government fell under its own contradictions, he said that Kumaraswamy’s allegations are made without any substance and it was Kumaraswamy himself who used to be always power-addicted.