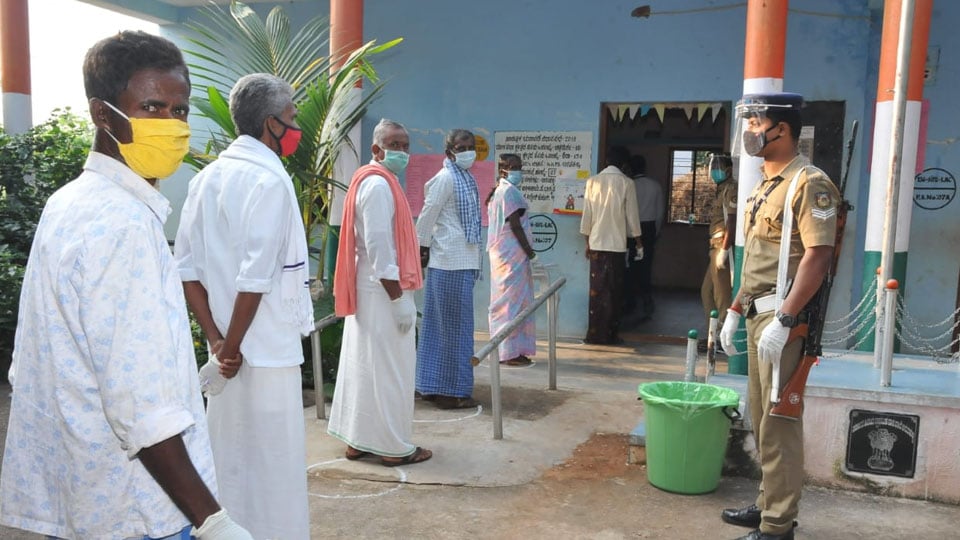 Counting of votes on Nov.10

Bengaluru: Amid COVID-19 pandemic, the by-election for Sira in Tumakuru district and Raja Rajeshwari Nagar (R.R. Nagar) in Bengaluru city Assembly Constituencies began on a dull note this morning. Voters seemed to be reluctant to come out and cast their ballot in the wake of the deadly pandemic.

As on 1 pm, the polling percentage in R.R. Nagar was 26.58 per cent. However, the voting percentage at Sira was not available when we went to the press.

The election authorities are expecting a good turnout and have put all COVID-19 measures in place as prescribed by the Union Health Ministry at all polling booths to ensure the safety of voters.

The polling began at a sedate note at 7am, but picked up pace as hours passed by. The polling will end at 6 pm. The counting of votes will be take place Nov. 10 and the results will be announced.

In R.R. Nagar, Munirathna is the BJP candidate, while the Congress has fielded H. Kusuma, a political novice and the JD(S) has placed its bets on Krishnamurthy, a party leader from West Bengaluru. While Munirathna is banking on the support of party workers, Congress candidate Kusuma, who is the wife of late IAS Officer D.K. Ravi, is depending upon the sympathy votes of her late husband. JD(S) candidate Krishnamurthy is banking on the charisma of former Chief Minister H.D. Kumaraswamy and the party supremo H.D. Devegowda.

In Sira, the BJP has fielded Dr.C.M. Rajesh Gowda, while the JD(S) has fielded Ammajamma, wife of late MLA B. Sathyanarayan and the Congress has fielded its old war horse T.B. Jayachandra, a former Minister. BJP candidate Rajesh Gowda is the son of former Chitradurga Congress MP C.P. Moodalagiriyappa. Gowda had switched over to the BJP from the Congress just a few days ago.

COVID positive patients are allowed to cast their votes between 4 pm and 6 pm. Vehicles have been arranged to pick up and drop them by the Election Commission of India. During that time, the poll personnel will wear PPE kits and after voting by COVID patients, the Electronic Voting Machines will be sanitised before shifting them to the respective counting centres.

Along with Sira and R.R. Nagar, as many as 54 Assembly segments in 11 States and one Lok Sabha Constituency also witnessed by-polls today.

Voters of R.R. Nagar complained to the polling official;s about their names missing in the voters’ list. They contended that they had voted in previous election but their names have gone missing now.

So far, voting at both the Assembly segments has been peaceful, thanks to elaborate security arrangements being made by Police.