Home » Voice of The Reader » Monkey menace at Chamundi Hill 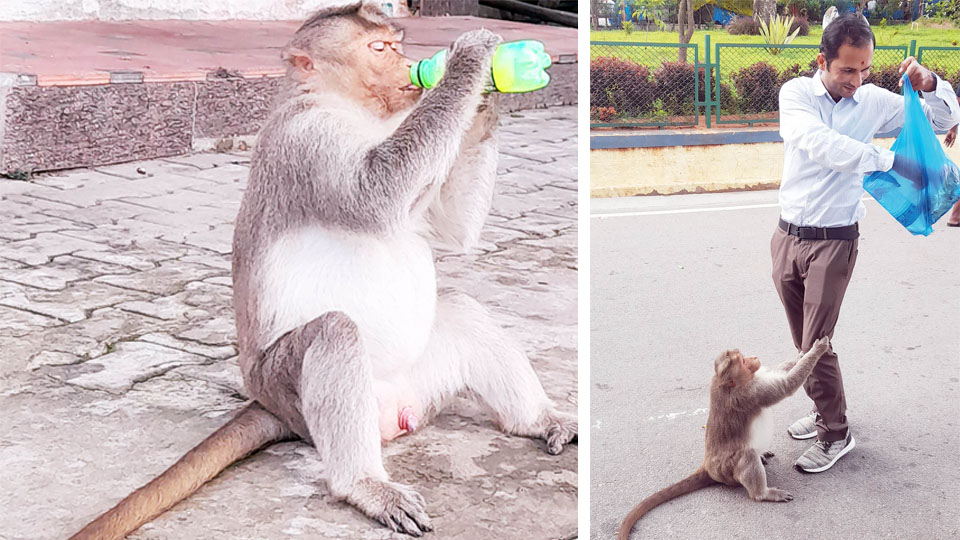 The monkeys near the temple atop the Chamundi Hill are proving to be dangerous to the visitors of late. They roam around without fear of humans and attack those who are carrying bags containing fruits and prasadams collected inside the temple. While it is a comic sight for the bystanders, it must undoubtedly be a traumatic experience for the targets of these simians.

I was a witness to several attacks during my recent visit to the hill temple. I was especially very perturbed to see one giant sized monkey waylaying one pilgrim (see photo). It was not satisfied with a banana that it was offered. The poor fellow must have had a minor heart attack on seeing such a big monkey with such sharp teeth, standing non-chalantly, holding on his knee.

Finally, it jumped up and made away with the entire carry bag that he was carrying in his hands. It was obvious that it had taken a liking to the soft drinks that the pilgrims carry in their hands. Hope the authorities take suitable measures to curb the menace, before any untoward incident happens, which would prove fatal to some pilgrims. Till then, it is suggested to the pilgrims that they carry a bamboo stick of sorts with them to ward off such attacks, when they visit the hill next.