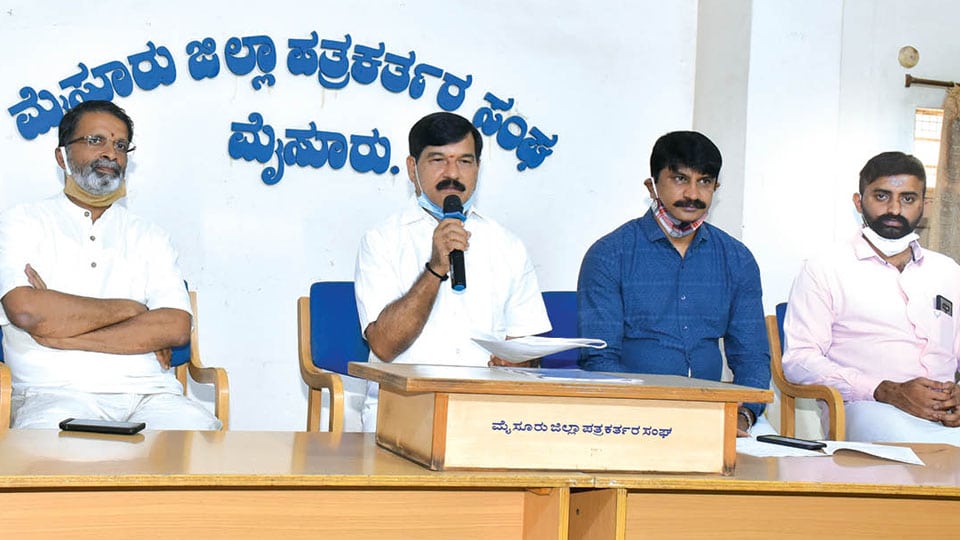 Mysore/Mysuru: With Prime Minister Narendra Modi set to lay ‘shilanyas’ for Sri Ram Mandir at Ayodhya in Uttar Pradesh on Aug.5, K.R. MLA S.A. Ramdas said that more than 500 Kar Sevaks from city will be travelling to Ayodhya by a special train from Mysuru to attend the grand ceremony.

Addressing a press meet at Patrakarthara Bhavan here on Sunday, Ramdas said that the Prime Minister’s foundation stone laying event will be telecast live in about 90 countries.

Pointing out that Ram pujas will be performed from 9.30 am to 2 pm on Aug.5 at all the prominent Circles coming under his Constituency, he said that special pujas will also be performed in 312 temples and all Ram Mandirs in the city marking the event, for which preparations have already begun.

Noting that more than 10,000 devotees have come forward to perform Ram puja at their homes, he said that this number may reach 25,000 by Aug. 5.

Huge LED screen: Stating that a huge LED screen will be erected in front of his Office at Vidyaranyapuram for the benefit of the public to watch the programme live on Aug.5, Ramdas said that Kar Sevaks of the city who had taken part in Ram Janmabhoomi Kar Seva at Ayodhya on Dec.6, 1992, will be felicitated on the occasion.

Pointing out that all preparations have been made for the performance of pujas, he said that specific tasks have been assigned to party workers.

Srihari of GSSS Foundation, B.S. Prashanth of Safe Wheels, BJP leaders M.Vadivelu, Premkumar and others were present at the press meet.

Ramdas disclosed that his late mother had voluntarily donated a part of her savings towards Ram Mandir.  He said that his mother had collected Rs.7,80,216 in ‘Golakas’ over the years and the same has been sent to Ayodhya through Kar Sevaks.