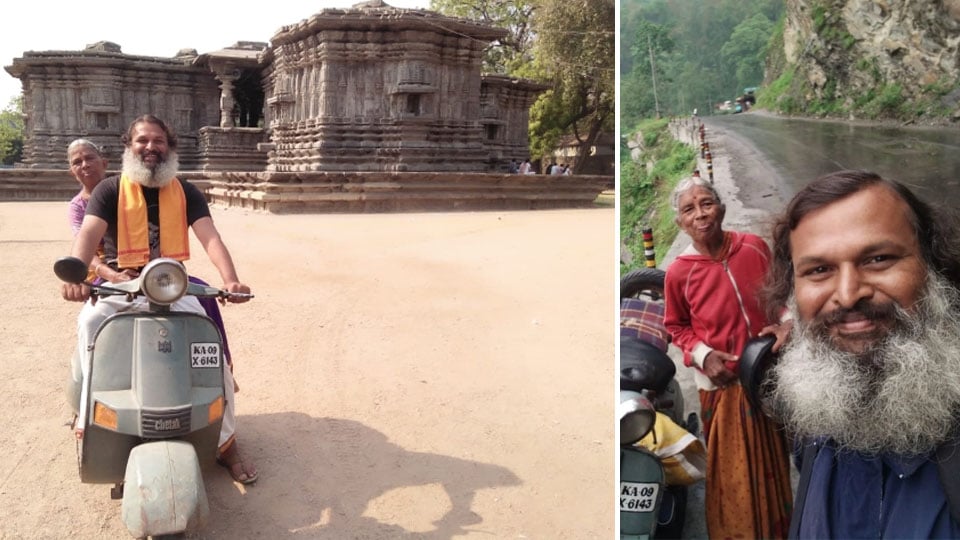 Mysore:  The story of a Mysuru man who is taking his 70-year-old mother on a pilgrimage covering more than 50,000 kilometres on his scooter has struck a chord with businessman Anand Mahindra who took to Twitter offering a car as a gift to Kumar.

“A beautiful story… About the love for a mother but also about the love for a country…” wrote Anand Mahindra. “If you can connect him to me, I’d like to personally gift him a Mahindra KUV 100 NXT so he can drive his mother in a car on their next journey.”

Manoj Kumar’s post has created quite a stir among people. Till now, it has gathered more than 5 lakh views — and still counting. It has also amassed more than 15,000 likes and about 5,500 retweets.

Not many who so deeply love their mothers would dare do what Krishna Kumar did for his 70-year-old mother Choodarathna sitting pillion on a pilgrimage covering almost all the holy places across all States south of the Vindhyas.

Krishna said that he was happy earning a good salary and working as a corporate team leader in a private company in Bengaluru, until he decided to quit his job and take his mother on a pilgrimage, covering the whole of India.

“In 2015, when my father passed away, my mother was living a very lonely life. One day, I visited my mother in Mysuru, she expressed her desire to visit Hampi and Belur-Halebeedu temple. I felt terrible when she said that having travelled across Karnataka due to my profession, I felt guilty for not being able to accommodate such small request of my mother. I took her there in my scooter. From there on, every weekend we used to visit some holy place or the other,” said Krishna.

For this yatra, he first customised his 2000 model scooter and made his elderly mother sit pillion in a manner to immunise her from travel fatigue. “In the joint family system, my mother’s role was confined to the kitchen until the death of my father. I decided that my mother deserves not only quality time from her only son, but also a dignified life for all the sacrifices she has made,” he explained.

Choodarathna had spent almost her entire life within the four walls of the 10-member joint family home in Mysuru, without any friends or social life of her own, Kumar said. Though she is qualified as a Hindi teacher, she did not take up a job, and instead decided to dedicate herself to her family.

On why he opted for a two-wheeler, he said that the simple mode of transport ensured door-to-door travel. “My father gifted me the scooter in 2001. I am very emotionally attached to this Bajaj Chetak. I feel that my father is along with me and I am only like a charioteer taking both my parents for the place of their liking,” he says.

“We never stayed in any hotels or lodges, instead sought out Mutts to rest our aching bodies. Not once did my scooter break down. I only had to fix a puncture after having covered over 16,000 kms,” he said.

“We are never in a hurry, depending on our interest we move from one place to another, therefore we cannot exactly say how much time we will take to complete our journey and destination,” he revealed and added that they usually consume fruits and prepare curries out of vegetables that are available to them. And they never faced any health issues.

“I worked for 13 years and all my hard-earned money is kept in my mother’s account. Every month, we withdraw the interest and use it to travel. Many people offered us money but in this yatra, we shall not accept gifts or money. We will take love, and shelter for night halts.”

His mother said that she was proud to have such a son. “It’s very hard to get a son like him nowadays. I am very lucky to have him. He is showing me temples, towns and villages. I have even met many of my old friends with whom I had lost contact. He cares a lot about my health. People have really helped us a lot, and even invited us for food and shelter,” she said.