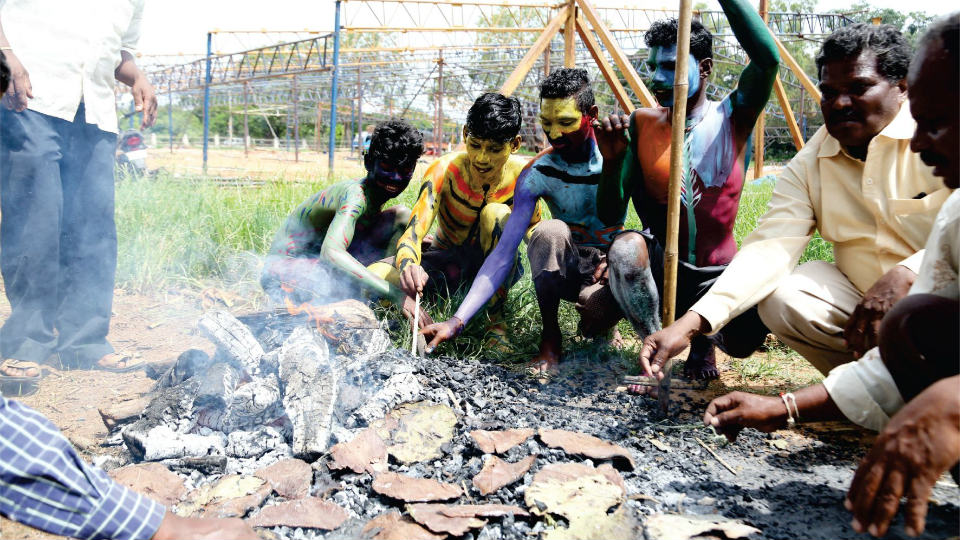 Mysuru:  Come Dasara and the District Administration completely gears up to celebrate it in a befitting manner. It is not just the nine-day celebrations and the tenth day Jumboo Savari, nor the Yuva Dasara nor the various music and cultural programmes that it hosts that people look forward to. But, the initiative it has taken to introduce the tribal and the adivasi way of life, food habits and their vibrant culture, since the last few years that equally attracts the people of Mysuru and other parts.

It is with this motive that the District Administration welcomed the Adivasis from various Tribal Haadis yesterday at the Scouts and Guides Ground adjacent to the Crawford Hall. They will be serving traditional food from Sept. 21 to 30 during the Aahara (Food) Mela. 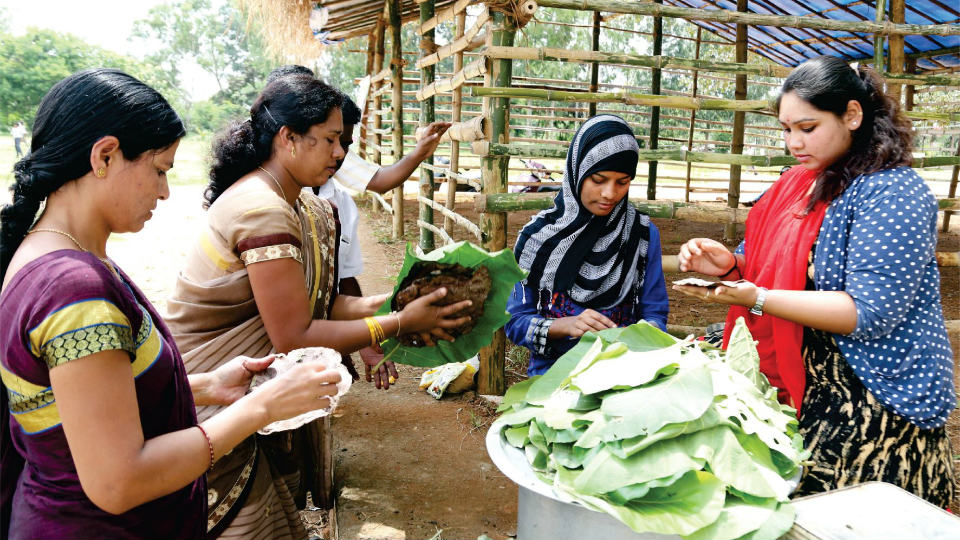 A few of the tribal women rolling ragi rotti in Flame-of-the-Forest leaves. This, along with ‘Bamboo Biriyani,’ will be the gastronomic delight to be served at the Aahara Mela during Dasara celebrations scheduled from Sept. 21 to 30 at the Scouts and Guides Ground.

They were also welcomed with traditional dance performed by the tribals. Later, by serving baked tuber and tasting honey, the officials inaugurated the programme.

Gastronomic Delights: Dasara Aahara Mela Sub-Committee Working President Dr. Rameshwarappa, speaking on the occasion, said that this year the Adivasis from various parts of the State will arrive and serve variety of traditional tribal and adivasi food to the people of Mysuru and the tourists that will throng the Food Mela during Dasara.

Along with the ‘Bamboo Biriyani,’ which has become the hot favourite dish among the people since the last two years, this year the Adivasis from Biligirirangana Betta will be serving tradition food items like Ragi Rotti, pumpkin, field beans (avarekai) curry on Flame-of-the-Forest (Butea monosperma) leaves, which will be an added attraction.

The Adivasis are adept at their own medicines and they always depend on the forest that has plenty of medicinal plants. Hence, they will be introducing wild banana recipes, which have medicinal value for people suffering from diabetes. The other mouth-watering recipes include bamboo rice payasa, magali beru (Decalepis hamiltonii) tea, coffee, Ragi Balls (ragi mudde) — crab curry and Maddu Payasa. 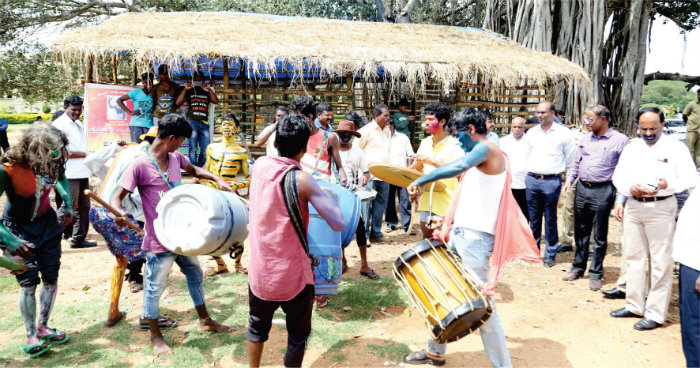 Adivasis with their traditional music instruments entertaining the officials of the District Administration at the Scouts and Guides Ground in city yesterday.

The Aahara Food Mela will be held in Bharat Scouts and Guides Ground and also in Lalitha Mahal Palace grounds from Sept. 21 to 30. However, the special Adivasi food will be served only at Scouts and Guides Ground. Last year, ‘Bamboo Biriyani’ was in such great demand that it would just fly off the pots and people had to return disappointed, as sufficient bamboo was not available in the forests adequately. However, this year, all arrangements are being made to cater to the taste buds of at least 1,000 people. Hence, the bamboo will be got from forests of Kerala to fulfil the demand, said Dr. Rameshwarappa.