Home » Dasara 2017 » Dasara jumbos all set for a grand spectacle 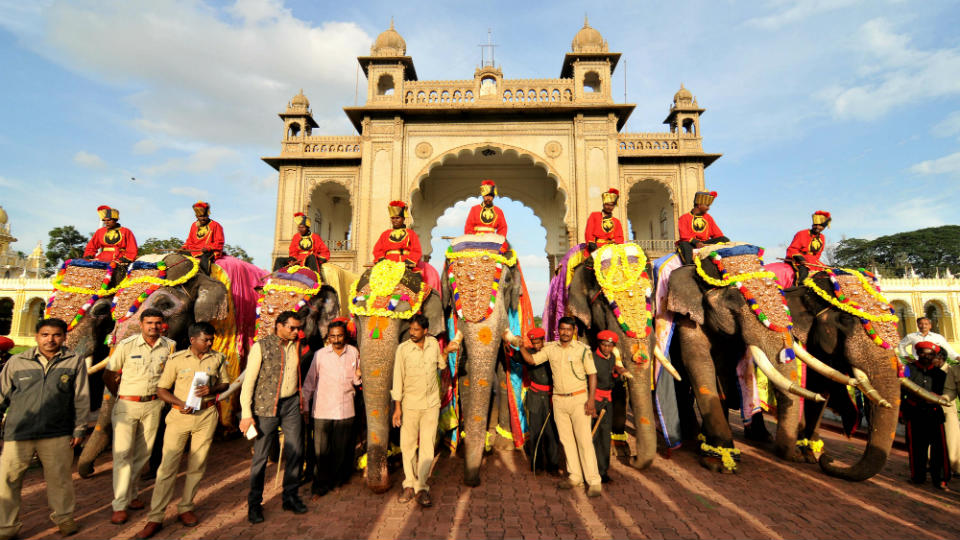 Dasara jumbos all set for a grand spectacle

The main attraction of Dasara is the grand procession which is held on the day of Vijayadashami (Sept. 30). This year, Arjuna, will lead the procession by carrying the Golden Howdah (Chinnada Ambari) with the statue of Goddess Chamundeshwari installed upon it. The elephants, which live in their respective forest camps, arrive in Mysuru in two groups. They are brought to Mysuru to get acclimatised to the weather conditions and also to the Jumboo Savari route which starts from Mysore Palace and ends at Bannimantap Grounds. The City Police also conducts rehearsals of the cannon firing to make the elephants get used to the bombarding sound of the cannons.

The elephants, to Mysuru, are accompanied by their respective Mahouts and Kavadis, who come with their family members. This year, Gajapayana, the journey of elephants from the forest to city, was held from Nagapura, instead of Veeranahosahalli, near Nagarahole National Park in Hunsur. The jumbos are offered traditional puja before they start their journey. Earlier, the elephants were made to walk the entire route, but since a few years they are brought to Mysuru in trucks.

The elephants in their respective camps are served with rich nutritious food to keep them in perfect health condition for the Dasara festival. They are fed rice, groundnut, coconut, jaggery and sugarcane with some salt to add taste to the diet after they return from their regular rehearsals. This food is served twice a day.

They also get branch fodder like banyan leaves. Extra care is taken while serving food to the jumbos. High-calorie and protein-rich food is served to the elephants to improve their physical fitness. They carry a lot of weight at the procession and for that, they need strength. Hence they are fed with rich food. The food served in the morning is laced with pure butter for flavour. 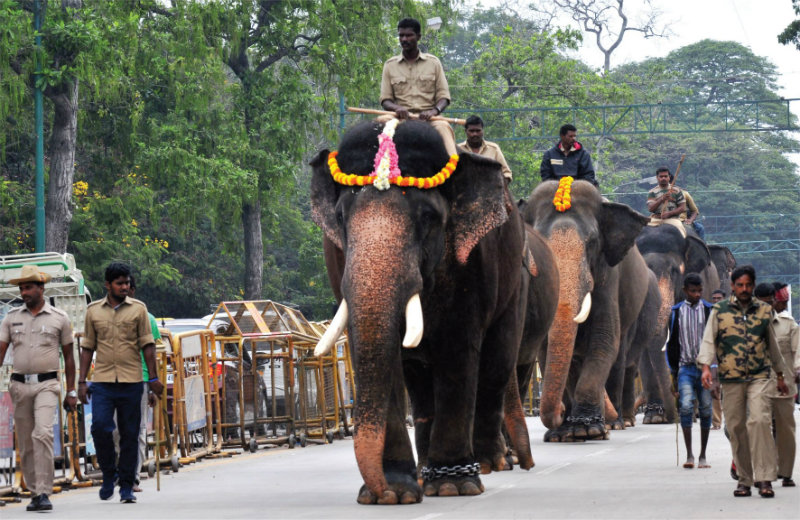 An elephant eats 400 kilograms of fodder in a day in the forests. The food served to them in Mysuru contains high calories and is more than what they eat in the forest. The Dasara elephants are usually the ones which are caught by the mahouts with help of other elephants during the khedda operations held previously. During the Wadiyar rule, the elephants caught were inspected in an open field for strength, personality and character. The walking styles, weaknesses to seduction, the facial charisma were some of the factors considered for selection. Then the chosen elephants were trained for the festival. It is said that the King himself would oversee the training. Sometimes abandoned young elephants are also trained for Dasara. It is said that there are about 70 tamed elephants kept in camps at Dubare, Nagarahole, Veeranahosahalli, Metigud, Sunkadakatte, Bandipur, Moolehole, K. Gudi and Bheemeshwari. About 240 mahouts and kavadis take care of the needs of these elephants.

This year, the first batch comprising of Arjuna, Abhimanyu, Balarama, Bheema, Gajendra, Vijaya, Kaveri and Varalakshmi were given traditional welcome by the district administration Jayamarthanda Gate of Mysore Palace on Aug. 17. The elephants on their arrival to Mysuru were stationed at Aloka Palace for few days after which they were brought to Aranya Bhavan before being shifted to the Mysore Palace. 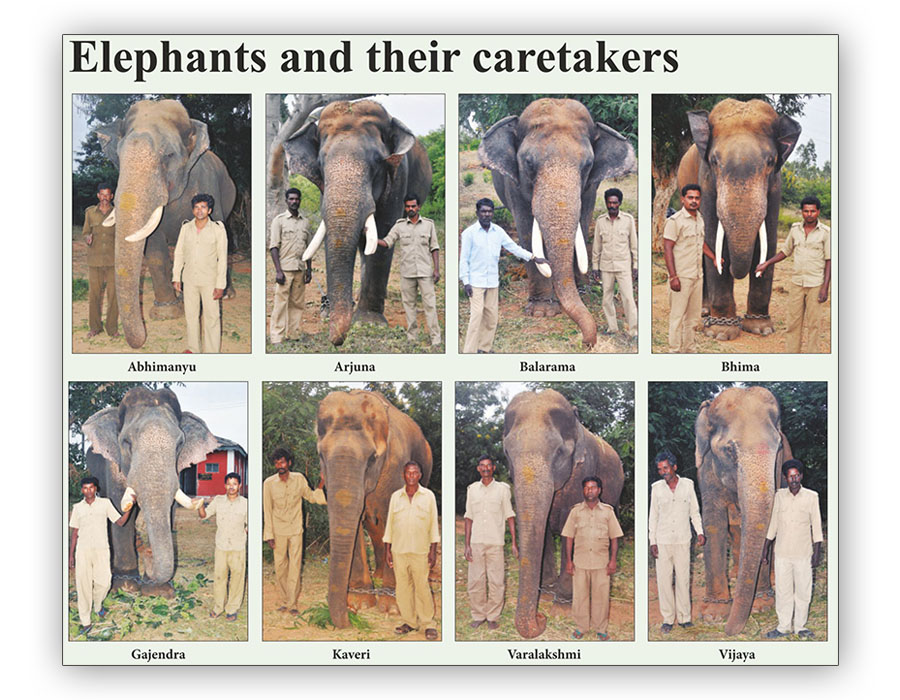 Ever since the elephants have arrived, they have been kept under special care of DCF V. Yedukondalu, RFO Rajeshwari, DRFO Antony Swamy, Veterinarian Dr. D.N. Nagaraj, Veterinary Assistant Rangaraju and others.