Home » Dasara 2017 » He ensures elephants are fit as a fiddle 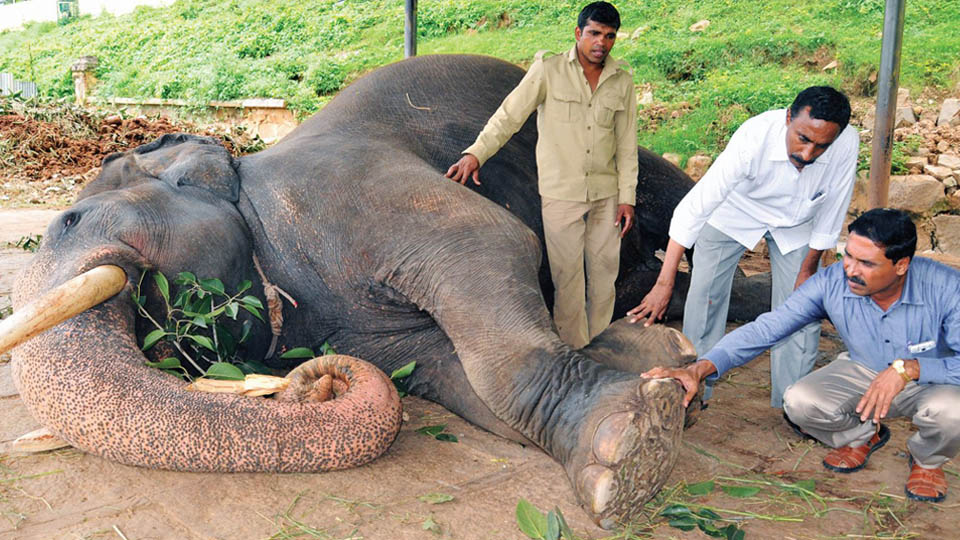 He ensures elephants are fit as a fiddle

Dedicating one’s life for welfare of animals is not something which can be taken lightly. Though having studied veterinary science, many restrict themselves to be a pet doctor. But there are few people who join government service and dedicate themselves for well being of wild animals. One such person is veterinarian Dr. D.N. Nagaraj, who has been working with the elephants for the past 17 years taking care of their health.

Having completed his schooling and PU education at Turugnooru in Bannur Hobli, Dr. Nagaraj completed his Bachelor’s in Veterinary Science from Veterinary College in Bengaluru and got selected for a government job during 1993. He worked as a veterinary officer with the Mysuru City Corporation (MCC) between 1995 and 2000 after which he had been working on and off with the forest department. With his vast experience, Dr. Nagaraj has been entrusted the task of taking care of all 15 Dasara Jumbos which have now taken shelter the Mysuru Palace. Dr. Nagaraj has also been working for the Project Tiger since 2012.

Like mentioned earlier, Dr. Nagaraj has been entrusted the responsibility of looking after the Dasara elephants which are currently housed at the Mysore Palace premises. The elephants are continuously checked for their health and are provided with the rich food containing minerals, vitamins and proteins. Once the rehearsals for the elephants begin, Dr. Nagaraj accompanies the elephants everyday to the Torchlight Parade and then back to Mysore Palace, which is around 8.5 kms (both ways). He visits elephants’ camp twice everyday and sometimes thrice depending on the need.  The Dasara elephants are fed four times on a daily basis. They are given protein rich food at between 6 am and 6.30 am and again at 10.30 am after the rehearsals, later at 4 pm and 6 pm.

“The elephants are fed protein-rich food to keep them fit for the 10-day Dasara event. Initially, the elephants are made to walk early in the morning make them acclimatise to the weather conditions. Once they are comfortable, the forest department then places a cradle and sand bags to match the weight of the Golden Howdah (750 kgs) on Arjuna, the Howdah elephant, for the rehearsals”, he said.

It is not only during Dasara, that these elephants are given the royal treatment. Similar facilities are extended to them throughout the year in their respective camps as well. The forest department takes good care of these elephants to keep them healthy and fit throughout. “I visit the elephant camps once in every fortnight. The elephants are checked for their health and food intake. We also interact with the mahouts and kavadis to know about elephants’ behaviour. Later, depending on the feedback and conducting few examinations, the elephants are given medications, if required. There are few days when I have stayed for more than a week at the camps to monitor the health of the elephants.” he said.

Dr. Nagaraj, who credits his family for their support and co-operation, also mentioned that he is ready to work 24×7 looking after the wild animals and educating people, especially those living in the border of the forests to stop killing animals.

Dasara 2017 Dasara elephants S.N. Venkatnag Sobers
Words Vs Swords… And the Trolls
Dasara jumbos all set for a grand spectacle