Home » Columns » Words Vs Swords… And the Trolls 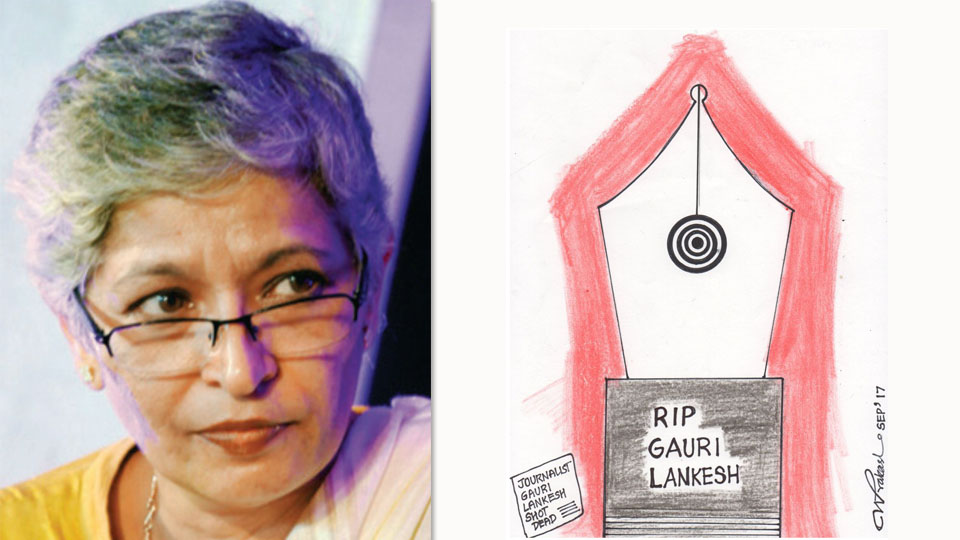 Words Vs Swords… And the Trolls

Journalist and activist Gauri Lankesh has been assassinated. The gun has silenced the pen.

After the news of her death broke, I received calls from friends and family warning me to watch what I write as we now live in an atmosphere of hate.

When I asked one of them why he felt no outrage about stifling of free speech, he said “Free speech doesn’t mean you are free to say whatever you want, and insult other people’s belief in a derogatory and provocative manner.”

Yes, Gauri Lankesh had extreme opinions. She mocked Hinduism; she especially insulted the RSS by almost always referring to them as “chaddis.” She sided with Naxals but then was brave enough to coax some of them into social mainstream. This at the cost of upsetting the Maoists.

But more importantly, at the core of all that mockery and insult, she was trying to push a much-needed agenda — social reform.

The issue many of her critics had with Gauri was that they could not debate with her. Some say they did not want to is because, as one person said, “when you mock and are overly aggressive you do not invoke a debate but provoke disgust.”

Pattanaik adds, “The intellectual can hurt with his/her words. The soldier can hurt with his/her weapons. We live in the world where the former is acceptable, even encouraged. The latter is not. Those who think and speak are superior to those who beat and kill, even if the wounds created by word-missiles can be deeper, last longer and fester forever. I, the intellectual, have the right to provoke; but you, the barbarian who only knows to wield violence, have no right to get provoked and respond the only way you know how to. If you do get provoked, you have to respond in my language, not yours, brain not brawn, because the brain is superior. I, the intellectual make the rules. The killings provoked by the thinker thus goes unnoticed. The thinker — the seed of the violence — chuckles as the barbarian, whose only vocabulary is physical, will be caught and punished while mental warfare will go on with brutal precision.”

So the question is how much of a free speech can we have? Are we ready for free speech in its truest sense that no matter how harsh an opinion we will tolerate it? I doubt it. But Gauri could be debated with; just that no one had the guts nor the patience to do so. Guess, gun was the easy way out.

Pattanaik also says, “When the ill-equipped barbarian even attempts to fight back using words, we mock him as the troll.” Maybe so but…

The problem is, today trolls are not uneducated barbarians; they are educated brutes. The things that are being said about Gauri Lankesh in social media are just plain perverse and in some cases sexually deviant.

Earlier, uneducated mobs would confront you on the streets; now educated trolls feel brave hiding behind their screen, spewing verbal violence. Worse, they do so in two sentences and half knowledge.

For example, one person mockingly asked why a lady named ‘Gauri Lankesh Patrike’ only calls herself Gauri Lankesh and added, “Is she trying to hide her Christian lineage?” He had assumed that ‘Patrike’ was ‘Patrick,’ a Christian name! Another person responded to this by explaining to him that ‘Patrike’ meant newspaper in Kannada and ended by calling him a dung-head!

Earlier, people had dual persona, one in the house and another in public; now it seems we have a third one for the virtual world.

I appreciated Gauri’s idea of social reform, but was no fan of how she expressed it or even debated it. But like many, I liked her writing in English, I respected her ability to live life on her own terms  and live it with conviction. Yes, she was vociferous; she was aggressive in her approach to social reforms but she was a courageous woman, a brave human and now she is dead.

The death of a fellow citizen, of a journalist and an activist must outrage everybody because, as Martin Niemoller, a Protestant Pastor said:

First they came for the Socialists, and I did not speak out — Because I was not a Socialist.

Then they came for the Jews, and I did not speak out — Because I was not a Jew.

Then they came for Me — and there was no one left to speak for Me.

We need voices of dissent in a democracy, else one day there will be no one left to speak for us. We cannot allow the gun to be mightier than the pen.

Gauri Lankesh In Black & White Vikram Muthanna
Mere worshipping Rivers as Mother will not save them, says Jaggi Vasudev
He ensures elephants are fit as a fiddle