Home » Feature Articles » Moving into the new corridors of POWER 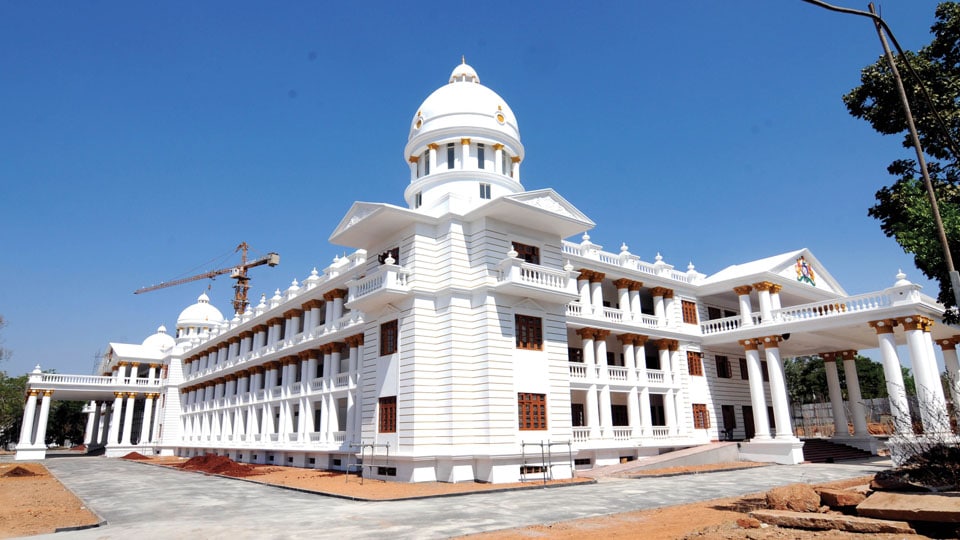 Moving into the new corridors of POWER

Certain Offices at the Deputy Commissioner’s Office near Crawford Hall in city are being silently shifted to the new District Offices Complex (DC Office) on the German Press premises at Siddarthanagar. The new Office has been built on the lines of Lalitha Mahal Palace Hotel to maintain the city’s heritage character.

The imposing structure has been constructed on a 15-acre land and the construction works have been completed by Karnataka Public Works, Ports and Inland Water Transport Department in a 22,920 sqmts land at an estimated cost of Rs. 59 crore. The project has been implemented by Pune-based M/s Shirke Construction Technologies Limited.

A state of disuse

When Siddharamaiah was the Chief Minister, he was keen to have an Office Complex matching the heritage structures of the city and where all Government Offices are housed under one roof. But despite being an architectural marvel, the building was in a state of disuse though it was inaugurated in March 2018. Since then, there were no efforts to move to the new place. The 22,920 sqmts building has a basement of 9,150 sqmts, ground floor of 4,720 sqmts and first floor of 4,500 sqmts and has a second floor of 4,550 sqmts. The land was sanctioned by the Union Government and Mysuru-Kodagu MP Pratap Simha was instrumental in sanctioning the 15-acre plot by convincing Union Urban Development Minister (now Vice-President) M. Venkaiah Naidu.

Sensing the need of shifting to the new building, Mysuru Deputy Commissioner Abhiram G. Sankar had brought to the notice of PWD three months ago that they wanted a spacious auditorium, partitions, computers and furniture for functioning of Offices and to make suitable alterations.

Following the DC’s request, a lot of alteration works were done and other basic facilities have been provided. And since the last six to seven days a few of the Offices are being shifted to the new premises.

The present DC Office is in a 150-year-old heritage building and congested. There is no parking place and except the Deputy Commissioner all other officials have to park their vehicles outside the building. As a result, many District Offices, including Social Welfare and BCM Offices, which were functioning at DC Office premises, have shifted to private buildings.

Since the DUDC officials are involved in flood relief work, the Office has not been shifted completely. Letters have been written to the officers of the remaining Departments to shift the offices along with files and records. However, the Deputy Commissioner’s Office will function at the old building till the completion of Dasara celebrations, the DC said.

As the Offices of Mysuru Urban Development Authority (MUDA) and Mysuru City Corporation (MCC) are close by and the officials there are involved in Dasara-related activities, the DC Office will function from the existing place till Dasara, he added.

Weeds surrounding the new DC Office have been cleared and rooms have been kept ready for occupation. To maintain the cleanliness of the massive building, the Government has been urged to give grants for house-keeping and maintenance, said Sankar.

Along with the construction of the Office Complex, road widening works from Dairy Circle in Siddarthanagar till Bannur Road Junction have been completed. Ornamental electricity poles have been laid on the stretch following international standards and they are illuminated at night. Work on box culvert pipeline, water pipeline and drainage works and minor bridges have also been completed.

Offices in the old building

Slowly the remaining Departments will be shifted to the new Complex and even the other Government Offices in city will also be moved to the new spacious building so that the public need not go from one place to another for their work.