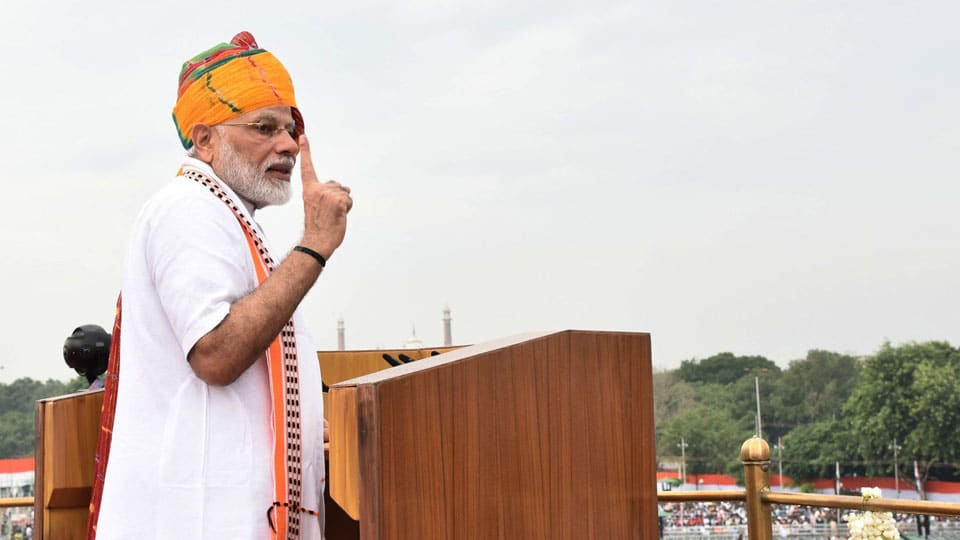 Today, from the ramparts of the Red Fort, I want to address the issue of population explosion in the country. Parents in India now need to give a serious thought to whether they will be able to fulfil their child’s dreams and aspirations and support a new life.

A small section of society, which keeps their families small, deserves respect. What they are doing is an act of patriotism. I want you to do proper family planning and you will naturally see that a smaller family can be happier and more content. Your family will have more resources, better education and healthcare.

I was told in my graduation class by my Economics Professor that for a good economic growth of a country three important resources are imperative. They are: 1. Geographical Area, 2. Natural Resources like rivers, forests, minerals etc., 3. Population. Our country is blessed with all these resources and yet there is no economic growth corresponding to its potential.

Absence of economic growth before we got Independence in 1947 was understandable. But what happened in the past 72 years? The present kind of staggering economic growth is unfortunate and speaks very badly about our rulers — politicians and bureaucrats. This is in contrast with other colonial countries that got Independence after India. These countries have developed at much faster rate than India.

What went wrong with our country? Did our politicians, belonging to majority and minority communities, more frankly as Hindus and Muslims, ever think about the causes for our stunted economic growth? No. They thought of only vote banks and about winning the elections. They kept on appeasing the minorities by procrastinating important decisions while preaching Secularism to the majority. That was why they forgot about abrogating Articles 370 and 35(A)!

It is only since 2014, after Narendra Modi became the Prime Minister, the idea of ‘Country First’ found its expression in multiple ways — Political, Economical, Social, Cultural and Aspirational. All earlier Governments were run by zombies — rulers, not leaders — including Atal Bihari Vajpayee. As for Vajpayee, it was a let-down for the people and also the BJP as he was more interested in getting shabashgiri even from those who were hurting the country’s interest. After all, Nehru himself had prophesied about Atal Bihari Vajpayee becoming the Prime Minister one day !

When everything looked despicable and doomed for the country after 10 years of UPA rule, country’s fortunes took a turn for the better future when BJP’s Narendra Modi became the Prime Minister. Of course, the first five years from 2014-2019 were years of study and evaluation for Modi to fix the past misrule before working for a New India.  In his second term, Modi is into serious business of putting the country on fast track. Amit Shah, the Home Minister, has rightly said about abrogating Article 370: “We did in 70 days what Congress failed to do in 70 years.” So be it.

Now let us consider Modi’s 73rd Independence Day speech delivered on Aug.15, 2019 from the ramparts of the Red Fort. His 95-minute speech was pregnant with hopes and aspirations for a new resurgent India on a march of victory. And the first victory was when the most pernicious and discriminatory Articles 370 and 35(A) were abrogated finishing the unfinished job of integrating J&K with other States of India in a holistic way.

While this is a bold and beautiful decision in itself for Modi, in my opinion he has taken another equally bold and important decision about limiting the population growth of our country with its present number of 130 crore and still growing. As I mentioned earlier, this is a huge human resource which is considered one of the three important assets for any country. However, sadly, 40 percent of the human resource available in our country at present is considered unemployable, unskilled and unproductive and naturally it is a burdensome human resource that will adversely impact on our country’s economic growth.

In the early days of Independence, Pandit Jawaharlal Nehru and his Ministerial colleagues understood the danger inherent in an unrestrained growth of population. Therefore, they came up with a Ministry that would work for birth control under a campaign known as Family Planning. This campaign had come up with many catchy slogans in all the scheduled languages and published them through newspapers and outdoor hoarding advertisements. Some of the slogans for example were — ‘Chhota Parivaar Sukhi Parivaar’, ‘Hum Do Hamare Do’, ‘Chikka Samsara Chokka Samsara’ etc.

This effort at population control went on till about 1977-78 despite objections and protests from fanatical minority religious groups of Roman Catholics and Muslims. Some Hindu groups too protested because it was perceived that Family Planning was intended to restrict the population growth of only Hindus. Surprisingly, the Janata Party came to power in 1977 after the Emergency and the then Health Minister Raj Narain, with his own brand of vote-bank politics, abolished the Family Planning campaign all together. In its place he brought in what was called as the ‘Ministry of Health and Family Welfare.’ That was the end of a progressive project of the earlier Congress Government. The result: Population grew at an astronomical rate.

Here I must remember late Sanjay Gandhi who, between 1975-77 ironically during Emergency years, took up the cause of Family Planning in all its dimensions without caring for the religious sentiments of the majority or the minority religious groups. Unfortunately, he died young in an accident. If only he had survived he would have come back to power like his mother Indira Gandhi in 1980-81 and I am sure he would have pursued his most important project for the good of the country.  In fact, it was kind of terrorism. Nasbandi (sterilisation) was conducted by force as the Departments were given targets to achieve.

The Opposition political parties were highly critical of his programme. Many negative articles were written and even the world famous novelist from Mysore R.K. Narayan had written a short story about forced nasbandi titled ‘The Razor’s Edge’ and it was published in the Illustrated Weekly of India, Bombay. As I remember, the story was about bringing a youngster to the hospital under duress for vasectomy procedure. When all seemed set for the surgeon’s scalpel to make the incision, the unmarried youngster, in utter shock, jumps out of the surgical table screaming and bolts from the operation theatre…

Be that as it may, the most critical point to ponder for every patriotic Indian, whether he is a Hindu, Muslim, Christian or to whichever religion he belongs, is to think of the country’s economic growth and future. At present, any development or welfare scheme put in place is neutralised because of the abnormal growth in the                                                            population. As a result, no matter how much the Government spends towards health, education, industry, infrastructure, employment or housing, a huge void is found between the want and the means. This begs the fundamental economic principle — Wants are many, Means are few. The only way to put an end to this paradoxical dilemma is to control the growth of population. Therefore, let us wholeheartedly support our Prime Minister Narendra Modi and help him make India great.