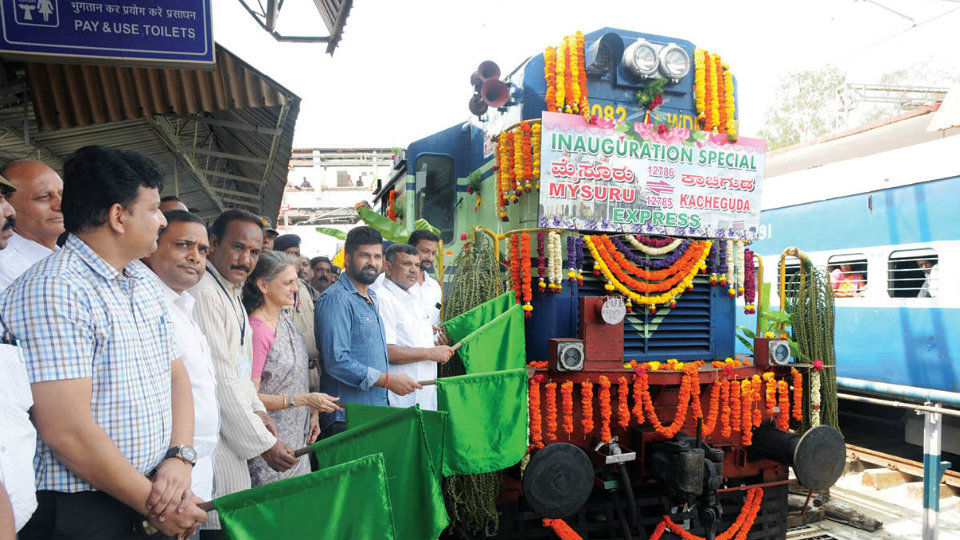 Mysuru:  “We have introduced six new trains to Mysuru in the recent times and in the coming days the Mysuru-Chennai-Hyderabad trains will be run every day, as also trains to Trivandrum, Mumbai and Madgaon will also be connected from Mysuru,” said Mysuru-Kodagu MP Pratap Simha.

He was speaking after flagging off of the extension of Train No.12785 Kacheguda-KSR Bengaluru Express to Mysuru here this morning at the City Railway Station and said that this train was extended in the interest of the public and both Prime Minister Narendra Modi and Railway Minister Piyush Goyal had given their approval after he had brought it to their notice.

There had been hitherto no train connection to Kodagu and hence the train services will be introduced and land for the purpose is being acquired. Also there are plans to introduce daily train service from Mysuru to Mangaluru after the general elections, which is currently running thrice in a week, he said. The work on the ten-laning of Mysuru-Bengaluru Expressway at a cost of Rs.7,550 crore will be completed in another two years and once it is complete the commuters can reach Bengaluru in just 90 minutes, he said and added that the Mysuru-Madikeri Economic Corridor Expressway project at a cost of Rs.6,000 crore will also be taken up once the land acquisition process is over.

All these projects are funded by the Central Government and as an MP during his tenure he has been responsible for better rail, road and air connectivity to Mysuru. These works were taken up not with any personal agenda but only in the interest of the people of Mysuru. These are the promises made in the election manifesto when he stood for the MP elections in 2014 and most of it he has completed, claimed Pratap Simha.

The remaining work on the City Railway Station will be completed and there will not be any work pending once his party comes back to power in the upcoming elections, he said.

Train No. 12785, which was flagged off in the morning will, however, leave Mysuru Railway Station at 2.45 pm and reach KSR Bengaluru Station at 5.40 pm. Additional Divisional Railway Manager A.K. Sinha, Railway Advisory Committee Members Sampath, Manoj and Giridhar were present.

Modi to return as PM

Later, addressing the media MP Pratap Simha said that after he became an MP six new trains were introduced, besides 19 trains running daily between Bengaluru and Mysuru.

“I have not indulged in dynastic politics or in corruption. All the work that I have done is in the interest of the people of Mysuru and Kodagu and I am positive I will get the co-operation of the people for me to win again in the next elections. I am sure that Prime Minister Modi will return to power one hundred per cent and so will the BJP with a thumping majority,” he said. Asked about the ‘Operation Lotus’ his party is allegedly indulging in, Simha said that the only operation BJP believes in is the one that takes place in hospitals and not the one the Opposition accuses his party of.