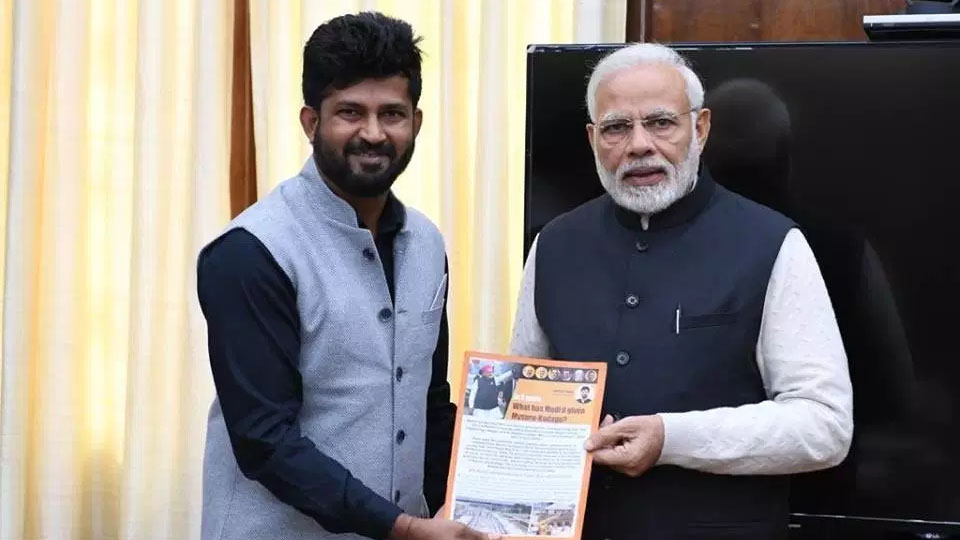 Mysuru:  Mysuru and Kodagu Member of the Parliament Pratap Simha, lauding Prime Minister Narendra Modi for his pro-people Budget, said that this gave him full hope for being re-elected for the good work he has done for his constituency.

Addressing a press conference at Jaladarshini Guest House here this morning, Simha holding forth for more than an hour, highlighted various aspects of the interim Budget-2019, presented by interim Finance Minister Piyush Goel yesterday and said that the PM had focused on all sections of the society be it the poor, farmers or the middle class.

“This Budget is the best ever presented in this country so far and everyone is satisfied. The previous UPA Government had given nothing like this ever and the full credit for this should go to our Prime Minister,” he said.

The very fact that both small and marginal farmers are going to get Rs.6,000 every year directly into their accounts is a big boost to that community which has been reeling under agrarian distress and with Rs.75,000 crore earmarked, it is going to be a big game changer, he said.

Everyone was critical of the Jan Dhan scheme but with this direct transfer of money into accounts, the leakages will be completely stopped, he claimed.

The middle class has got a real boon as those earning Rs.5 lakh a year need not have to pay taxes and if they invest wisely then they are exempted up to Rs.6.5 lakh, he said.

Turning his attention to local issues, Simha said that All India Institute of Speech and Hearing had been given Rs.55 crore grant for overall development besides getting money for the construction of a new building earlier from the Centre.

He also said that the more flights will be added shortly under UDAN scheme from Mysore Airport which will give a boost to industry and tourism in the city. However, he was upset to hear that the State Government was planning to handover a portion of the land to Air Force which his Government at the Centre will never allow to happen.

He also assured that all development works with regard to Railways including the Satellite Railway Station at Naganahalli will be completed in another two-and-a-half years.

Regarding the proposed Mysuru-Kushalnagar Railway line, he said that if the State Government gives land, the Centre is ready to start the project.

Taking exception to FKCCI President Sudhakar Shetty’s statement that the Budget did not look into basic facilities, he said that a person holding an important chair like that should not speak lightly as the focus of Modi Government has always been on providing basic amenities to everyone.

“Just like Modi is the Pradhan Sevak, I am also a Sevak who has delivered in the last five years to the people of Mysuru and Kodagu. I know the people and they know me. Even people with ideological differences and Minorities will vote for me. Hence, I have no worries in getting elected again,” said Simha.

On whether Appachu Ranjan is also a contender as he had expressed his desire to contest, he said that he (Ranjan) had said only in jest and later clarified that he had no intention of contesting.