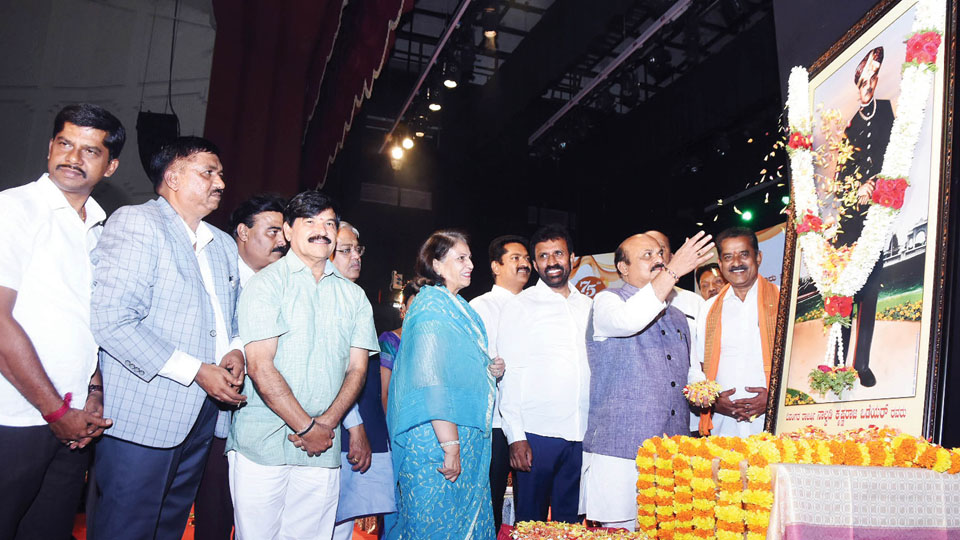 ‘Karnataka progressed due to firm foundation laid by Wadiyars; We are forever indebted’

Mysore/Mysuru: Promising that new-age machineries will be added to modernise Mysore Paints and Varnish Limited (MPVL) founded by Nalwadi Krishnaraja Wadiyar, Chief Minister Basavaraj Bommai said that the Government is committed to develop MPVL as a modern asset with new marketing strategies.

The CM was addressing the gathering after inaugurating the Platinum Jubilee celebrations of MPVL, formerly Mysore Lac and Paints (MyLAC), at Kalamandira in city last evening.

“MPVL is a unique asset of India and is the only factory which manufactures indelible ink. This is an enterprise founded by Nalwadi Krishnaraja Wadiyar and has crossed 75 years with many milestones. We want it to function and grow further for another 75 years and more,” he said.

Mentioning that many private players are competing with MPVL in the areas of paints and varnishes though MPVL has the exclusivity on the indelible ink, Bommai said that the Government will release funds to modernise the MPVL so that it can give private players a run for their money.

“I understand that MPVL is making profits. But modernisation is imperative to face the competition by private companies. The factory will be modernised and new-age machineries will be added. The company management can adopt new marketing strategies that will make MPVL grow further,” he said.

Comparing the MPVL with Karnataka Soaps and Detergents Limited (KSDL) that manufacturers Mysore Sandal Soap, another enterprise founded by the Wadiyars, Bommai said that the institutions founded by the Maharajas of Mysuru have established their own identity.

“Such institutions, established with a forethought by the Wadiyars, can continue to function amidst tough competition only if they adopt modern technologies. A special mention has to be made here about the indelible ink as no company so far has been able to compete with the quality of indelible ink and the ink is in demand in many countries. It is a matter of pride that the ink vials are exported from a tier-II city like Mysuru,” he said.

The CM recalled the contributions of the Mysuru kings, especially Nalwadi Krishnaraja Wadiyar, to agriculture, industry, education and other sectors. “Karnataka has progressed in many sectors including IT and BT and today, the State is famous across the globe and investment is pouring in all fields. This is only because of the strong foundation laid by the Wadiyars who saw the future. The State and its people will always remain indebted to them. Along with the Maharajas, the Maharanis too contributed to public welfare and kept public interest ahead of private interests,” Bommai added.

“Wherever I go, I recall the contributions of Wadiyars and I have held the technologies used by them in high esteem. The establishments manufacturing steel, cement, paper and paints, founded by the Mysuru kings, are a shining example of their thought process and farsightedness. The Krishna Raja Sagar (KRS) Dam, built using lime-mortar is an engineering marvel. The Dam benefits most of the South Karnataka areas and entire Tamil Nadu. What more examples needed to call the Wadiyars noble souls,” he asked.

“The repairs of all the crest gates of KRS Dam will be completed soon as the main focus was to plug water leakage. An impossible goal has been achieved as over 16 gates have been repaired so far, and the gates’ life has been increased by another 50 years,” he said.

The CM added that the statues of erstwhile Mysore royal family members who were behind the establishment of Vani Vilas Sagar Dam near Chitradurga will be installed in the Dam premises as a tribute.

In his address, MPVL Chairman Raghu R. Kautilya compared Nalwadi Wadiyar to Lord Ram who constantly worked for the welfare of people. He traced the MPVL history from its establishment and recalled the contributions of former CMs D. Devaraj Urs and B.S. Yediyurappa.

Earlier, the CM and other dignitaries offered floral tributes to the portrait of Nalwadi Krishnaraja Wadiyar. Pramoda Devi Wadiyar of the erstwhile Mysore royal family released a documentary on MPVL and Minister for Water Resources Govind Karjol released a souvenir. The CM released a book ‘Mareyalaagada Maanikya T.S. Subbanna.’

‘We use MPVL products at home’

I feel proud to represent my family in the 75th anniversary celebrations of MPVL and is a special honour as I am a part of the illustrious family of Nalwadi Krishnaraja Wadiyar. We still use the products manufactured by MyLAC (MPVL) as they are known for quality. I wish more success to MPVL so that it can move ahead to celebrate 100 years.