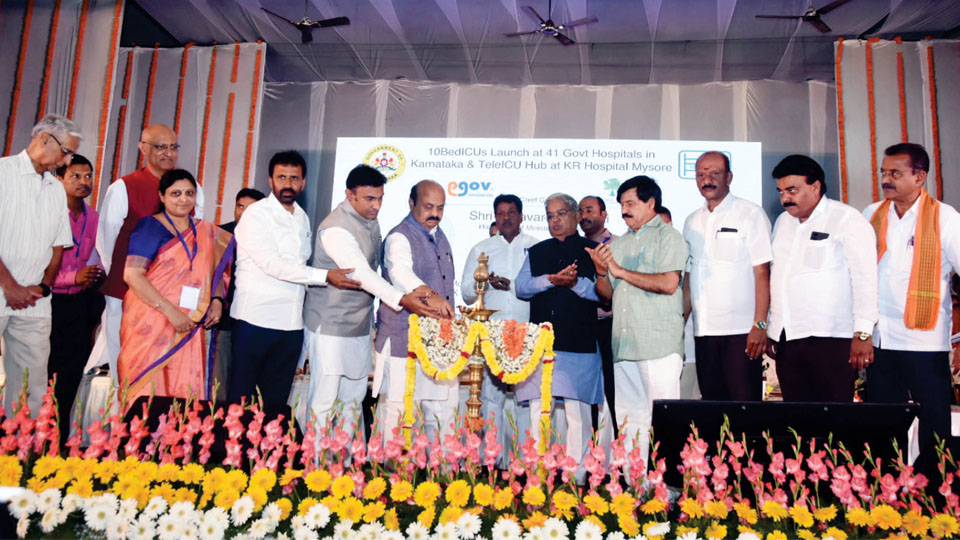 Very soon, R&D Centre to be established at MMC&RI

Mysore/Mysuru: Chief Minister Basavaraj Bommai said that he would allocate funds in the coming budget for establishing a Research and Development (R&D) Centre at the Mysore Medical College and Research Institute (MMC&RI),  Karnataka’s first Medical College which is celebrating its centenary in 2024.

The State’s top 10-15 Medical Colleges could also take up research for making affordable drugs and providing affordable treatment, he suggested.

He was speaking after inaugurating a slew of development projects including the 10-Bed-ICU project and Tele-ICU Hub at K.R. Hospital, a Private-Public-Partnership project between the State Government and a group of NGOs, students’ hostels, skill lab and other facilities at MMC&RI last evening.

The CM asked Health and Family Welfare Minister Dr. K. Sudhakar, who was on the dais, to take steps for setting up the first R&D Centre at MMC&RI.

“You can even bring the best talents from outside. Our dependency on MNCs for drugs and equipment can be reduced to some extent if all our Medical Colleges carry out research towards making healthcare affordable,” the CM said.

Bommai said new facilities such as lecture halls, library, hostels and examination halls of MMC&RI that were inaugurated were developed at a cost of Rs. 100 crore. A sum of Rs. 89 crore had been released for the renovation of MMC&RI’s Hospitals. Last evening’s event was held at the Platinum Jubilee Hall in J.K. Grounds.

The CM urged the scientists to conduct research to produce inexpensive drugs and provide affordable treatment as many people, especially those in rural areas, were unable to access medical care owing to overpriced drugs and interventions.

READ ALSO  Yoga to be taught in Schools from next year: CM tells PM

The model of affordable healthcare that produces inexpensive drugs and provides affordable treatment to many people especially those in rural areas has to be followed as a large number of people are unable to access medical care owing to overpriced drugs and interventions. Affordable drugs and treatment are the need of the hour, the CM opined.

Bommai said, “Every year around 5,000 students enter the medical profession but still there is a shortage of doctors. These doctors must serve at least two years in Government Hospitals as they will see the most complicated medical challenges in these hospitals. The fledgling medicos must also focus on serving the poor.  You get difficult and complicated cases only in Government Hospitals and such cases help you develop skills and increase your reputation and you can easily handle any complicated case in a private hospital.” “Our Government has given importance to the health sector and has distributed hearing aids free of cost to the needy people for which the Government is spending Rs. 500 crore,” he said further.

Quality healthcare for all

In his speech, Dr. Sudhakar listed out the Government’s achievements in the healthcare sector. He said that it is their Government’s job to ensure that the people of Karnataka have access to top quality and affordable healthcare.

“We are focussing on augmenting health infrastructure at all three levels — primary, secondary and tertiary. Concrete steps are being laid to revamp our medical education system in the direction of making it more inclusive, accessible and affordable to all,” he added.

Srikanth Nadhamuni shared details about the concept of ‘10-Bed-ICU’ and said that the initiative in the last 18 months has launched ICU wards in 200 hospitals in 8 States of the country. “We have also developed a cutting-edge Tele-ICU technology platform for specialist doctors at medical colleges to help rural patients through a cloud-based software platform,” he said.

He later gave a presentation on the working of Tele-ICU Hub that was launched at K.R. Hospital. MMC&RI Dean and Director K.R. Dakshayani outlined the projects lined up for the development of MMC&RI and its teaching hospitals and the initiatives being planned as part of the MMC&RI’s centenary celebrations in 2024.