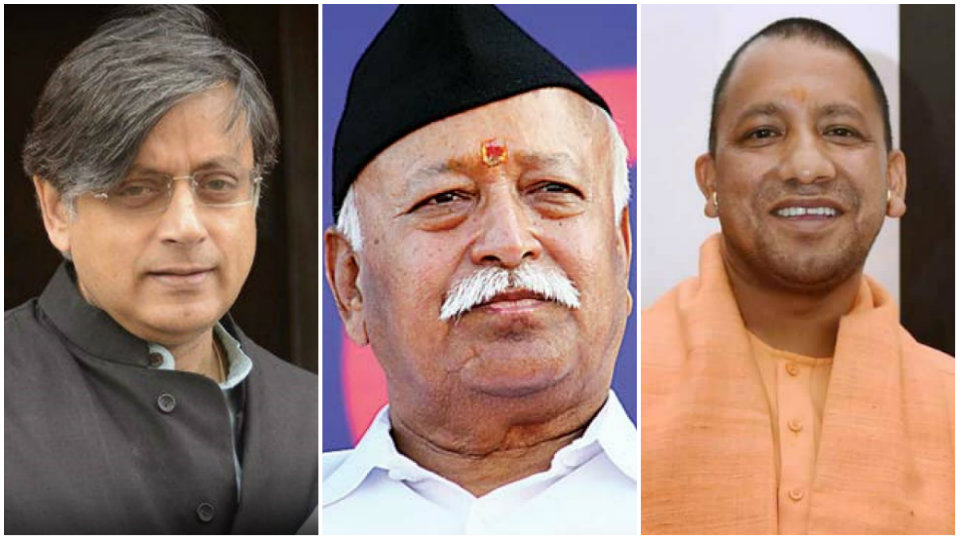 Much ado about ‘Hindu Pakistan’

The furore over Shashi Tharoor’s remarks over the possibilities of India becoming a “Hindu Pakistan” must have surprised his enemies and his friends in equal measure. It also reminds us, yet again, that we live in a politically surcharged atmosphere where battles can suddenly break out over a gesture, a phrase, a nudge or a wink. Communal emotions have become the sustenance of public life. They are the stuff of headlines and headlines are today the sum total of existence.

Shashi Tharoor has an unusual problem to begin with. Those who hate him are more articulate than those who don’t. His quotable English creates more adversaries since angrez is quintessentially anti-national. He also ploughs a lonely furrow although he wears the badge of the Congress Party proudly on his Kurta. He went out of his way to write a whole book explaining why he was a Hindu. But the Hindus who matter in our polity don’t believe a word of it.

That must be the reason why his “Hindu Pakistan” jibe kicked up so much dust so suddenly. On the face of it, the gist of what he said would be seen as unimpeachable in non-BJP circles. If the BJP were voted back to power, he said, it would re-write the Constitution “and that will enshrine the principle of Hindu Rashtra that will remove equality for the minorities and that will create a Hindu Pakistan.”

That kind of speculation has been aired by others before. The idea of re-writing the Constitution has been publicly promoted by the RSS chief Mohan Bhagwat himself. Addressing a lawyers’ conclave last year, he called for changes in the Constitution “in line with our value system.” He specifically demanded a legal system reflecting “Bharatiya ethos.”

This is a fully accepted viewpoint from the RSS angle. If Bhagwat put it gently and in respectable phrases, the Hindu Janajagrati Samiti expanded on it in a different tone when it talked of making India a Hindu Rashtra by 2023. The choice of that year could not have been accidental. It actually said that Yogi Adityanath’s rise to power in UP had indeed started the process of creating a Hindu Rashtra.

Paradoxically, there is no consensus on what exactly is the definition of Hindu Rashtra. The term has liberal interpretations as well as communal ones. The RSS’s communications chief Aniruddha Deshpande saw Hindu Rashtra as a concept based on inclusiveness, which emphasises one’s duties to the nation rather than to the Hindu religion. Asserting that religion is a Western concept, he said: “Someone who is born a Hindu but is working against the country’s interests is not a Hindu for us. On the contrary, a non-Hindu dedicated to the country’s progress is a Hindu to us.”

This is as broad-minded a viewpoint as possible, considering that Hindu is a term derived from the Sindhu river and, therefore, geographical in nature. The spiritual side was covered by Sanatana Dharma, a non-religious term denoting, simply, a concept of Eternal Values.

Unfortunately, Deshpande’s generous definition of Hindu Rashtra is not supported by many of his ideological colleagues. An RSS-backed Think Tank in Mumbai recently organised a talk session with a group of authors, columnists and thinkers known for their anti-RSS stance. Many RSS stalwarts objected to this, calling it “appeasement of enemies.” One said: “In today’s time, those who see the Sangh as enemy should feel isolated, not honoured.”

READ ALSO  Assassins of old were honest, modern ones are cowardly. But the cowards are destroying the Indian dream

What did he mean by “in today’s time?” Clearly, hardline Hindutva groups feel that this is their time with a government that promotes their objectives. If these groups get another five years of power, it would be dumb to expect them to waste it. In a country where public debate is not only possible but is the norm, it is legitimate to raise such issues for people to think about.

Shashi Tharoor’s point, therefore, was valid, but perhaps he made a phraseological mistake, linking Hinduism with Pakistan, which helped attackers to open fire from multiple angles. Most of the shots were farcical — that the phrase showed denigration of Indian democracy, that India was being equated with Pakistan, that Islam was being promoted.

All that happened was another reminder that we are a democracy where an extremist ideology using religion as a tool is finding it hard to gain control. That is because the majority of Hindus in this Hindu-majority country vote not as Hindus, but as Indians. In their hands, our country and our Constitution and our Sanatana Dharma are safe and will remain safe.

12 COMMENTS ON THIS POST To “Much ado about ‘Hindu Pakistan’”