Home » Columns » Abracadabra By K. B. Ganapathy » The Lord Giveth and the Lord Taketh Away: Rest In Peace Fr. Noronha 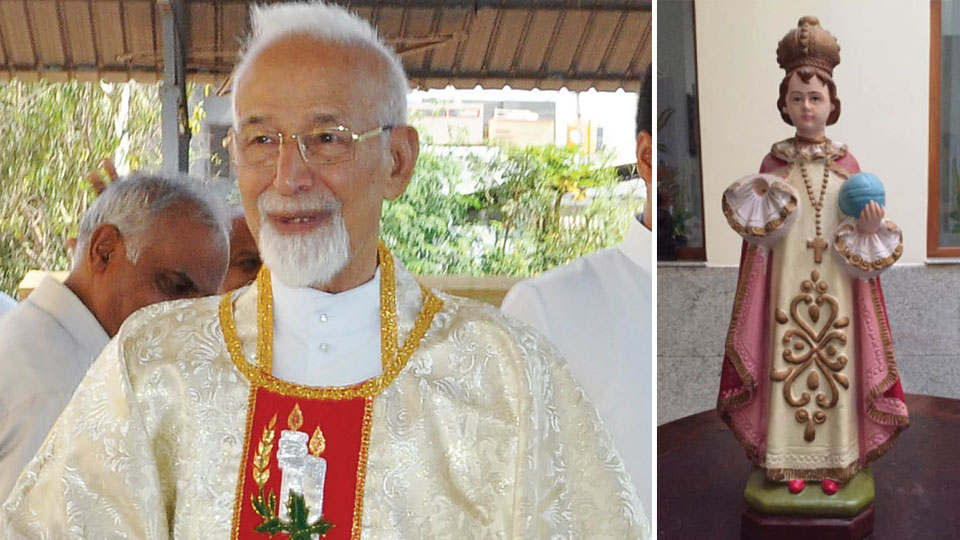 The Lord Giveth and the Lord Taketh Away: Rest In Peace Fr. Noronha

And the Lord takes away only at his pleasure. It is like holding an office at the pleasure of the President of India! Fr. Denis Victor Noronha passed away yesterday in city at the age of 86. A city he served well for many years that he became a household name even in non-Christian homes.

It is said that what one is born as, is God’s gift to man. But what one becomes, is man’s gift to God. Fr. Noronha is indeed man’s gift to God. It is because he as a Christian Priest had become one who served well the mankind, not just Christians, specially in the field of education and in providing succour to his flock in the Church.

Despite the raw-deal he received from the High and Mighty of the Church establishment, he served the Church without rancour till he retired, sadly, under the shadow of oblivion. Yet, even after he retired, whenever call came from the people, he reached out to them. Service to the Church and to the Mankind was his credo.

He was a Catholic Christian Priest who indeed took God to people in the form of prayer, education, health and personal visits to those in distress. Ever so active, he was always noticed in a congregation or a gathering because of his personality — tall, immaculately attired in Priest’s gown, long and fair complexioned visage, long and pointed nose with a goatee.

As I know, though he lived in poverty, he enriched the Church in Mysuru where he was ordained as a Priest on April 8, 1957. I learn no other Priest had built so many educational institutions and acquired real-estate properties for the Mysuru Church as Fr. Noronha. Of course, as the Financial Administrator (Procurator) he moved into the Bishop’s House as early as 1960 and it was a turning point for the Mysore Diocese.

I first came to know him in the late 1970s and early 1980s when I had to seek admission to St. Joseph’s Central (english medium) School for my children amidst stiff competition. He was the Correspondent and the final arbiter. It was at this time I was introduced to Bishop Rt. Rev. Mathias Fernandes, a wonderful, jovial person sans any hangups of the high office. He gave full support to Fr. Noronha in all his Church-related activities and Fr. Noronha did not disappoint the Bishop. The Mysore Diocese soon had many service-oriented buildings to show, not just the famed St. Philomena’s Church, the iconic building. As if to pay tributes to his mentor Bishop Rt. Rev. Mathias Fernandes, Fr. Noronha built the St. Mathias School at Bannimantap in 1982.

Bishop Rt. Rev. Dr. Francis Michaelappa succeeded Bishop Mathias Fernandes and I knew him also personally. He was a master in Kannada literature and could deliver discourses on ‘Sarvajnana pada’ and often quoted Sarvajna in his discourses and public speeches.

Many, including me, thought Fr. Noronha would be considered for the Office of the Bishop when Dr. Michaelappa passed away. But then, a whispering campaign that he was too young, deprived him the opportunity. Later, when the next opportunity came, he was considered too old. This is what one calls destiny or consequence of ‘Palace intrigue’. Later, he was to leave the Bishop’s House and posted to serve in Mandya and a village-town in Kodagu. But heaven knows Fr. Noronha. Wherever he went, he served his Lord and Mankind sans any feeling of deprival or denial of what he richly and rightly deserved for his service to the Church. He retired, as he began his career, as a Parish Priest, at the age of 82, having survived some serious health problems.

He did not have any private, special, comfortable place to live after retirement. He was staying at ‘Prashantha Nilaya,’ a Retirement Home for Priests of Mysore Diocese, in Bannimantap. I visited him twice here and found the place desolate. There were only few Priests like him. Service from those employed to look after them was poor and I was told, even offending. But Fr. Noronha took it all with a sense of equanimity and forgiveness. He was not of a complaining kind. But, fortuitously someone came like a Good Samaritan and got the rude cook changed. He told me that he would adhere to the Christian values of poverty, service, repentance and forgiveness till the end. And, looking at his life and death, he did.

During my second visit I saw a TV set which was not there earlier. And thereby hangs a tale.

It appears, once Suttur Mutt Seer Sri Shivarathri Deshikendra Swamiji went to see Father and seeing no TV asked how he spent his time. Father smiled and said, “Read a newspaper and go to the nearby St. Joseph’s Hospital to counsel patients.” Suttur Seer too smiled and left. This was in the forenoon. At 4 O’ clock in the afternoon, a  person from Suttur Mutt arrived with a TV set.

Today, it is important to remember that Fr. Noronha used to be a constant presence in all the Souharda Samithi meetings (Peace meetings) in city whenever there was disharmony or disturbance among different communities. Henceforth, he will be conspicuous by his absence and we will miss him. The Bible says, “Blessed are the peace-makers, for they shall be called the children of God.” And Fr. Noronha was our peace-maker. Also a child of God.

A couple of times he had come to my house and once had lunch too. He came with the statuette of Infant Jesus and gave it to me as a gift. After lunch, during our light-hearted banter, he said, “The family that eats together stays together.”

“Are you claiming to be a member of our family,” I asked with a naughty smile. He gave a long squeak and said, “Well, the whole humanity is one family. And the Bible says, ‘family that prays together stays together’.” Thank you Father. You were a true servant of God. RIP.

When the Father reached Heaven yesterday, he asked God, “Why was Jesus not born in the 21st century?” The Lord God began to laugh and said, “Impossible! Impossible!! Where would the 21st century people find Three Wisemen and a Virgin?”