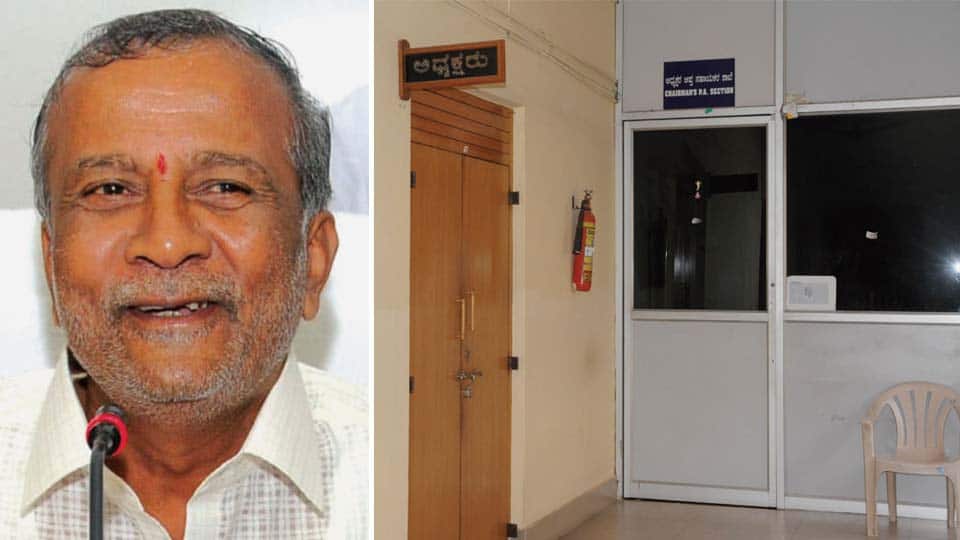 MUDA Chairman livid after his name removed from Office Chamber

Mysuru: Following the Election Commission directive that Chairmen of Boards and Corporations can no longer function in their offices and use official vehicles as the Model Code of Conduct is in place for the May 12 Assembly elections, the office of Mysuru Urban Development Authority (MUDA) Chairman D. Dhruvakumar has been vacated and the name board in front of his office chamber carrying his name has been removed.

Instead, the name board outside Dhruvakumar’s chamber indicates only “Chairman”, with the name missing. This, however, has not gone down well with Dhruvakumar.

The Model Code of Conduct came into immediate effect on Mar. 27 at 11 am with the announcement of the elections. Soon after the announcement, Mysuru Deputy Commissioner who is also the District Electoral Officer held a meeting with officials asking them to implement the Model Code of Conduct in letter and spirit. On the same day, the name board attached to the doors of MUDA Chairman’s office was removed.

Speaking to Star of Mysore, Dhruvakumar said that soon after the Model Code of Conduct came into force, he himself had taken the initiative of surrendering his official vehicle without waiting for any communication from the election authorities. “I am still the in-charge MUDA Chairman and only when the new government comes in to power, a new MUDA Chairman will assume office. It was an unfair move to remove the name board that had my name at my office,” he said.

Questioning the official move, Dhruvakumar said, “Why were the officials in an urgency and why this rule only for MUDA, not other Boards and Corporations,” he questioned.

Reacting on the issue, Mysore Paints and Varnish Limited Chairman H.A. Venkatesh said that it was not right on the part of authorities to change the name boards of Boards and Corporations chiefs. “Till the new government comes into power, we will remain as in-charge Chairmen of Boards and Corporations. It is not right to remove our name boards,” he said.