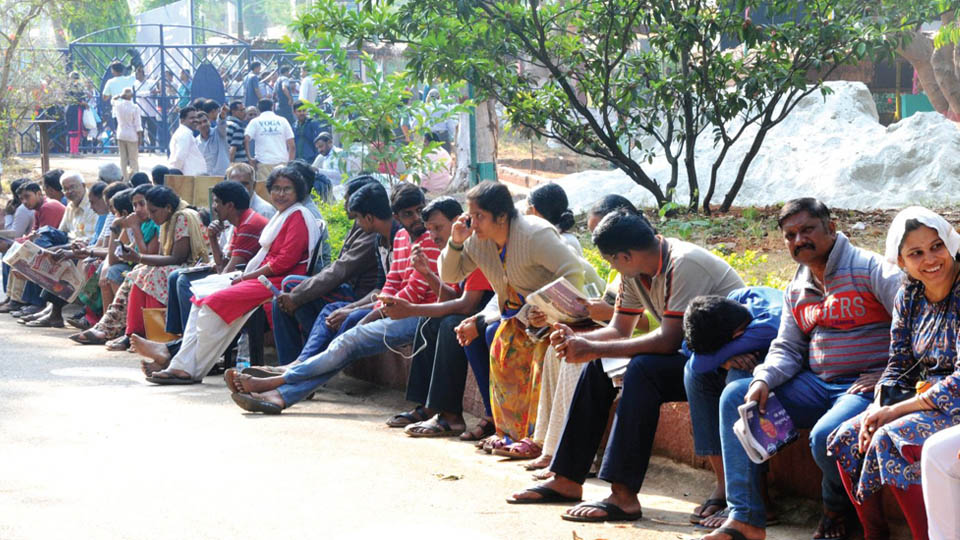 Mysuru: Hundreds of parents have been thronging Rangayana to catch hold of an application form for the annual Chinnara Mela, one of the most popular summer camps for children between the age group of 7 and 14. So much was the demand that several parents had camped outside Rangayana since last night, complete with blankets, food and mobile phones.

This year’s summer camp will be held from Apr.13 to May.10 and will expose children to several activities such as personality development, acting, singing, theatre, folk, crafts, painting, games, environmental issues etc. This is Rangayana’s 20th Annual Chinnara Mela and the camp will be conducted daily from 10 am to 5 pm.

This year, the issuing of forms consumed a lot of time compared to the previous years as the parents had to register their children’s name in the official ledger at the office whereas during previous years, they could get the form by just paying the fee. The ledger system has been introduced to avoid any discrepancy and ensure transparency.

Speaking to Star of Mysore, Rangayana Director Bhagirathi Bai Kadam said, “Chinnara Mela will be held in the same way like the previous years though it is new for me. I’m excited to see people waiting since yesterday night to get the application forms. We will see if we can make the process of issuing forms online. This year, children will be taken to rural areas and will also experience tribal life. The theme for this year’s camp is ‘Sound of Silence’.

Parents are seen camping at Rangayana premises to get hold of Chinnara Mela application forms since last night.

Speaking to SOM, G.D. Swamy, a business executive said, “I came here along with my son Shashank at about 5 am today. But people were already in line since midnight. My son is very keen to be a part of this. I’m hoping that my son gets admission. This is the first time I am coming here and it has been a tough day.”

“I haven’t had my breakfast and will have to take an off from my work. No official has come out yet to give any confirmation about the application status. With 300 members inside, we are waiting outside with no proper information. The people guarding the gate have just said that they will be updating the status once the 300 forms are sold,” he complained.

Dinesh and Kavitha couple from Hebbal were delighted to get the form for their son Chethan Gowda and daughter Purvika Gowda. They said, “Finally we got the forms. We have been waiting here since midnight. The wait has been difficult and we are lucky to have the forms. We finally managed to get our forms at about 10.15 am today.”

A few parents also complained that officials should have set up two counters instead of having just one. Police security was deployed at the venue for smooth functioning of the process. The filled-in forms should be submitted before 5 pm on Apr.10 along with a DD of Rs. 2,500 towards the fees (per child) drawn in the name of the Joint Director, Rangayana along with the birth certificate or the Aadhaar card of the participating child.